And Now Maybe Jon Garland Too

Share All sharing options for: And Now Maybe Jon Garland Too

Looks like the M's and Jon Garland have a deal pending a physical.

This is, obviously, unofficial, and it isn't being reported elsewhere, but it's also just Jon Garland so it's not like this is a hot major scoop. Let's just assume, for the time being, that it's probably true. A few things about that, then.

This would be a minor-league contract, as Garland would be coming in kind of like Kevin Millwood a year ago. Except as less of a certainty, because we had a sense Millwood would make the team from the time he was signed. Garland, by the way, is a starting pitcher, in case you didn't know, so don't be thrown by the misleading photo I attached to this blog post. Garland would be signed as rotation depth and competition, because who wants to let Blake Beavan get too comfortable? The Mariners already let Blake Beavan get too comfortable and look what happened. 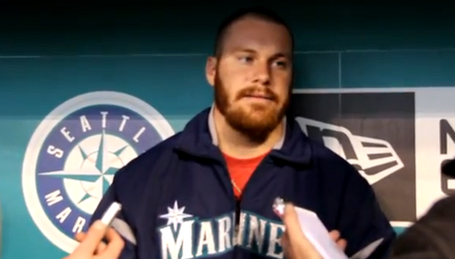 There's a guy who needs a fire under his ass, as much as anybody needs a fire under his ass, and now I'm just sitting here thinking about this unfortunate and most deeply unpleasant expression. Why would Garland be signing a minor-league contract? Because he didn't pitch at all in 2012, that's why. His 2011 was cut short by a shoulder injury that required surgery. Garland and the Indians arrived at an agreement last offseason, but Garland skipped the physical, citing an inability to pitch, so the contract was never finalized. Garland might be feeling better now, but we can't take his physical for granted, and he's now an extra year removed from pitching in the bigs, or, at all.

Garland's 33 and right-handed. He actually profiles very similarly to Joe Saunders in terms of overall results, with the major difference being that Saunders has been more healthy. Garland has posted both unexceptional strikeout rates and unexceptional walk rates, and his is a name you'd like to see more in the back of a rotation than toward the front of it. At least, that would've applied before his surgery and rehab; I haven't the foggiest idea what he might be like now. But if I had to guess, he's probably a lot like the old Jon Garland. He's more of an unknown than Saunders, but less of an unknown than Jeremy Bonderman.

I keep remembering Jon Garland as an Angel, even though he was an Angel for just one year. Previous to that he was with the White Sox forever, then after the Angels came the Diamondbacks, Padres, and Dodgers. Garland was born and went to school in California so he seems to be something of a West Coast guy, which would also help explain his signing with Seattle. That's not uninformed speculation. That's underinformed speculation. There's a difference.

The thing I remember the most about Jon Garland is how he was once lauded for his durability. Garland became a full-time starter in 2002, and through 2010, he started 292 games, throwing more than 1,800 innings. Garland was one of the most stable, durable pitchers in baseball, and then all of a sudden he hurt his shoulder and so far it's cost him a year and a half. This is an unfortunate reminder of pitcher fragility, given the rumored Felix Hernandez contract extension, but we can't just ignore the significance. Garland was a well-known workhorse. Every workhorse is a workhorse until he isn't. Garland reached a breaking point, from which he still might not ever return, and with Felix we just have to hope that the breaking point isn't for a long long time. It would be nice if Felix retired before he reached it.

So I don't know what Jon Garland is today. If the Mariners are indeed signing him, he'll be given a shot at the starting rotation. You know how much the Mariners like for their players to show up in Arizona to compete. Here are the rotation's virtual certainties:

So here are the guys who'd be fighting for one of the last two spots:

I don't know if Garland is better than Beavan, and I don't even know if Garland would pass a physical, but it's always a good idea to have more starters than you need. The more starters you have, the lesser the chances you have to give starts to Hector Noesi. Also I should mention that Eric Wedge managed for years against Jon Garland in the AL Central. So if Garland gets a shot with the Mariners and looks all right he's probably in. I...yeah, you should probably just accept it.