Felix Hernandez And Climbing The Mountain

We know where we're all trying to go. It's just a question of whether or not we're able to get there, and a whole lot of it is out of our hands.

Share All sharing options for: Felix Hernandez And Climbing The Mountain

I'm not really much of a collector. I used to be, of baseball cards, but then I turned 12. For a short time I had a collection of rocks from most every volcano I'd visited, but I neglected to give the rocks labels, and it turns out a lot of volcanic rocks look alike. So I definitely don't collect baseball team ballpark giveaways, but I remember when the Mariners announced a Larry Bernandez bobblehead promotion, I felt like I had to have one. I contacted someone I know with the Mariners and asked for a favor, and the individual came through in spades. Before much longer, I had a bobblehead of my own, and when I moved apartments a few months ago, I put it atop one of the sides of my entertainment center. 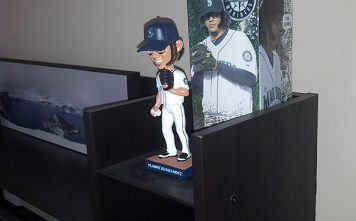 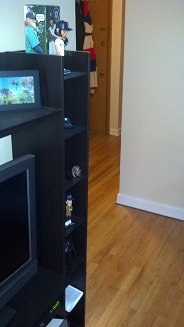 I wouldn't say my heart sank -- it's just a damn cheap bobblehead. I felt like an idiot, though, and I knew I'd broken an awesome collectible. That is, until I picked it up and checked for any damage. Hardly a scratch. I've accidentally knocked bobbleheads over before, and something always breaks off, if the thing doesn't shatter entirely. Larry, or Felix, remained perfectly intact. I picked it up and put it back in its place. I take more care, now, when I'm walking around my entertainment center.

Those are 325 words of a story that doesn't mean anything to you. But, if you're really into the symbolic, those are 325 words of symbolism. Based on a sample size of a Larry Bernandez bobblehead, Felix Hernandez is indestructible. And Felix Hernandez is said to be on the verge of a long-term contract extension, all but keeping him with the Mariners to the end of the decade.

It's been hours, now, so we're all able to think a little more clearly. Think about how your feelings about the John Jaso trade crystallized given the passing of time. Immediate responses care nothing for nuance or rationality. There's almost straight-up emotion, based on whether you like the player or don't like the player in question. There was a sentiment that the Mariners should give Felix whatever he wants in order to get him signed. When word got out that the Mariners were about to sign Felix, all of our brains just added Mariners + Felix. We love Felix and we love Felix with the Mariners, so almost all of us were overjoyed. What could be better than Felix sticking around, given that we love him and he's also a superstar?

Of course there's a point at which re-signing Felix is a bad move. It would be bad if the Mariners gave Felix a billion dollars over five years. We don't know where that point is, but we have a good sense that seven years and $175 million is neither entirely bad nor entirely good. The arguments in support of this extension are, for the most part, legitimate. So are many of the arguments against it. Not that we want to hear those arguments, but we're programmed not to give enough consideration to the long-term, and that's where this could hurt. That's where a lot of these pitcher contracts have hurt their teams in the past. Just because you can't conceive of the 2018 Seattle Mariners doesn't mean the future can be dismissed. You'll care about the 2018 Seattle Mariners, probably around 2018 or so.

It isn't enough to say this is market value for a pitcher like Felix, because maybe it isn't always a good idea to pay the market value. The market might just overrate ace pitchers, or the ability of ace pitchers to remain healthy ace pitchers. Some people have strict policies where they don't give long-term contracts to arms. It's a rather defensible position. I mean, the track record is bloody. These things always feel great at the start, but they continue well beyond the start, until they reach an ultimate end.

The PR argument is important and valid and also worth further consideration. We all love Felix, many of us maybe more than we actually love the Mariners. If the Mariners were to lose Felix, they could lose themselves some fans, at home and at the gate. There's something to be said for the fact that Felix has been keeping us going, even while the Mariners have struggled more than almost any other team. We've developed the strongest of emotional connections. But Felix has often been the lone shining star, and now imagine if the Mariners were actually good. There'd be a smaller gap between how we feel about Felix and how we feel about the team. We'd fall in love with other guys, too, and the Mariners wouldn't just be the Felix Hernandez Show. Going forward, the Mariners' popularity will be most directly determined by the Mariners' success. One player can't make that sort of difference, not in baseball, and so PR value should be of just limited importance. You want to have popular, marketable players, but good teams will generate their own, and bad teams won't draw anyway.

The franchise player thing, though -- think about how people in Seattle respond when you talk about Edgar Martinez. Think about how people in San Diego respond when you talk about Tony Gwynn. Felix could be on the way to being a Mariner for life, and he's already an amazing player. These guys don't exist anymore, not in great numbers, and we're talking about a long-term meaning that extends beyond the end of the player's playing career. This is a step toward Felix becoming a true Seattle sports icon, and that's the most you can ever hope for out of a player. These are the players that allow you to forget that sports are business. Players come and players go, and only the truly special ones stick around. Felix could be one of the special ones, and not every baseball team has a guy like that. It's the perfect sort of player.

We can evaluate based only on what we know, and what we know is that, right now, Felix is one of the best pitchers on the planet. What we also know is that pitchers are unreliable and they can always pull a Brandon Webb and stop pitching entirely overnight. Or they can keep pitching and get much much worse. There is absolutely no way to project where Felix is going to go, and where the Mariners are going to go with him. You want to say that $175 million is the result of some complicated, informed calculations, and maybe it is, but Felix could be everything or nothing or anything in between. This is going to be a journey into uncharted land. But I think I speak for all of us when I say I'm glad to be going on the journey with Felix in the lead.

Seven guaranteed years for Felix Hernandez? Over the last seven years, Felix has started 226 games, throwing 1536 innings. Had the Mariners given Felix a seven-year contract after his first cup of coffee, we'd have a lot of the same concerns. That seven-year contract would've worked out swimmingly. We just don't know and can't know. That's why so many of us are expressing our emotions -- we have no choice but to substitute emotions for fact. There just aren't enough facts.

Where the Mariners are now is in the foothills at the base of a big giant mountain. A hulking, glaciated peak, the Mariners intend to try to climb. Peaks like this have been climbed in the past, but the weather's always changing in the upper reaches, and conditions are unpredictable. Blue skies one moment are no guarantee of blue skies the next, and if you get trapped in a storm, you might never see blue skies again. Historical weather patterns on the peak mean only so much for this particular expedition, for this particular summit push. The Mariners are well aware of the risks, but they're determined to push ahead while crossing their fingers. It's a courageous endeavor -- some might say stupid -- but, can you imagine the feeling? There's nothing like that feeling.