Look, I'm sorry. I pretty quickly grew tired of the marbles jokes, and I intended to give them up once the Mariners lost a game and, thus, lost all the marbles they'd acquired. Yeah, yeah, they were playing for "all the marbles," we get it, knock it off, this is weird and surreal. Problem is the Mariners just won't lose any games and so the whole situation is kind of out of my hands. Did you see the lineup the Mariners threw out there Thursday afternoon? Did you see the lineup the defending champions threw out there Thursday afternoon? Did you see that Jon Garland and Blake Beavan were effectively starting opposite Matt Cain? I figured there might be an opportunity for today to spell the end of the marbles jokes. Nope. It's not just that the Giants couldn't beat the Mariners; it's that the Giants, at about full strength, couldn't beat whatever the hell these Mariners were. I've never been one to believe in destiny, but games like today's make you wonder. Plays like the below make you wonder.

I was curious to check out this Jesus Montero double highlight. Sure enough, Montero made solid contact, but he hit a catchable fly ball that Angel Pagan just flat-out dropped. The Mariners might never lose another baseball game, exhibition or non-exhibition. Game like today's make it seem written in the stars. The Mariners might go 162-0 and sweep through the playoffs, and then we'll reflect on the charity game against the Padres and wonder how much it ought to count, really. It's funny to think about -- if the Mariners never lost again, and won the World Series, we'd be fractionally upset that they lost to the Padres on the first day of intersquad activity. That would be a concern, even after the Mariners pulled off the most improbable anything of ever. God, we suck. We even suck about things we haven't encountered, and won't ever encounter. We just know we'd suck about them. We suck so much.

Marco Scutaro doesn't strike out swinging. He doesn't strike out, and he doesn't swing and miss. After joining the Giants last season, Scutaro struck out swinging in less than two percent of his plate appearances. Over the last two years, Beavan has allowed one of the highest rates of contact in the league. Over the same span, no hitter has made more frequent contact when swinging than Scutaro. When I tried to calculate the odds of Blake Beavan making Marco Scutaro swing and miss Excel spit out an answer in indecipherable Wingdings and then my desk caught on fire. I'm typing this with bandages on my fingers. I never should have tried to calculate the odds. Some equations you just know you're not to go near.

But it happened. It's right there, confirmed by Gameday and video and radio and Twitter. If miracles are defined strictly by probability, then this afternoon spectators in Scottsdale witnessed a virgin birth, and I don't know how this isn't all anyone is talking about. Blake Beavan's whole thing, his whole problem, is that he doesn't do this sort of thing enough. He did it against the most challenging strikeout in baseball. Maybe Beavan is going to go all Doug Fister on us. Maybe that tweaked delivery is going to make him amazing. Today, for an instant, he amazed.

Spring training is all about Franklin Gutierrez clearing the center field batter's eye and Blake Beavan using a new delivery to strike out Marco Scutaro swinging. You don't even have to dig to find bulbs of hope to pull out of the ground; they're just lying there, prone and pluckable. If you can't conceive of a world in which you sort of believe in Blake Beavan, though, you might find comfort in the fact that Brandon Belt took him deep. So it wasn't all weird. There were still elements of Blake Beavan this afternoon, but if Beavan is changing, that Scutaro whiff might be the first on-field indication. And then, in hindsight, we'll think we should've been tipped off by Beavan growing a beard. There's no quicker way for a man to change his entire identity than by growing a beard. Portland is filled to the brim with men who didn't like who they were.

Now for the lightning round. Outside of Blake Beavan generating strikeouts, including the most improbable strikeout, Franklin Gutierrez homered again. This time he went deep to right-center, which is a different sort of impressive from clearing the batter's eye. Gutierrez is either going to post a 7-WAR season or one day while he's taking a shower he's going to accidentally step on an inexplicable stonefish. Nick Franklin also went deep, off Matt Cain, whose whole deal within the sabermetric field is his ability to prevent home runs. Sure, he has a track record of preventing home runs, but not against competition like Nick Franklin. Here is what I think is a good image representation of the afternoon: 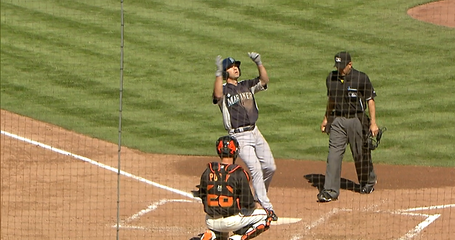 You're god damn right. Posting that image reminds me, it's kind of funny what can happen to Gameday when Gameday wants to run in a ballpark that isn't equipped with PITCHf/x cameras. 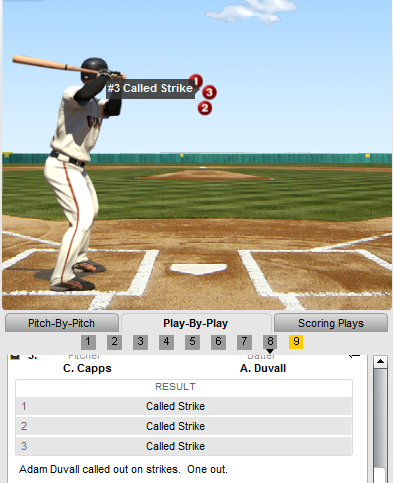 Alternatively it's about time umpires re-introduce the high strike after all these controversial years. Prior to Beavan's outing, there was Jon Garland's outing, which lasted an inning and was more or less normal. Garland pitched in the mid- to high-80s and he threatened to allow runs before ultimately not allowing any runs. That's half of what Jon Garland does, with the other half being him ultimately allowing runs. He isn't Superman.

Mariners pitchers struck out ten Giants while walking just one of them, and somehow that walk was Pablo Sandoval. Justin Smoak -- batting lefty -- doubled to left-center field, which for him was the opposite field, and with a little wind gust the ball could've cleared the fence. That said, it also hung up for a while so it wouldn't have been impossible for it to have been caught. Look at all the different things that can happen to a fly ball based on the environmental conditions and the defense! That same ball in play could've gone for four bases, two bases, or zero bases. Doubles are results-based analysis. This afternoon, while batting lefty, Justin Smoak hit a fly ball to left-center field. It was hit pretty hard and also pretty elevated and then there was a result of the play.

With the win the Mariners move to 6-1 while the Royals are apparently 6-0. I think by this point it's safe to criticize the Royals' trade for James Shields from the opposite perspective -- clearly, they don't even need Shields in order to be amazing. Diminishing returns and all that. Some people just don't know how to general manage. Friday afternoon the Mariners return home, which sounds more significant than saying "Friday afternoon, the Mariners don't drive half an hour somewhere." They'll play the Rangers and they'll pitch James Paxton and Brandon Maurer and others, and they'll win, and I'll have to prepare another apology for the jokes about marbles. Maybe tonight I'll come up with some kick-ass jokes about marbles. Stay tuned!