When I woke up this morning, the Cleveland Indians were ahead of the Seattle Mariners in the Cactus League standings. When I go to bed tonight, the Seattle Mariners will be ahead of the Cleveland Indians in the Cactus League standings, unless something really weird and unprecedented happens like the official scorer goes back and suddenly notices that the Mariners lost like two or three days ago. This afternoon, the Mariners didn't just wallop the Indians 5-1 -- they walloped the Indians on the Indians' own field, powered along by guys who won't even crack the Opening Day roster. I think this .gif of Terry Francona captures the mood in the other dugout while the Mariners were busy laying waste:

Fun fact: that kid with the bucket is replenishing Terry Francona's supply of in-game chewing gum. Additional fun fact: the catcher was rushing out to stop him -- "Tito's chewed enough!" -- but the kid was too quick. Terry Francona has rippling, bulging, glistening jaw muscles. Every winter he has to custom-order a balaclava. I don't know why he doesn't just wear the same balaclava from before but his muscles might only be getting bigger and bigger.

Today's primary source of annihilation was one Carlos Peguero, whose bust is pictured above, looking like he doesn't understand what it means to have his bust pictured. In the third inning, against Brett Myers, Peguero sliced a home run over the left-center fence, meaning it went to the opposite field. In the fourth inning, against Corey Kluber, Peguero clobbered a home run over the right-field fence, landing hereabouts: 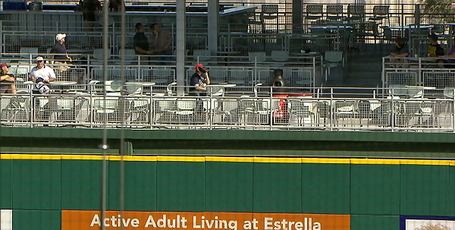 You're given an indication of the landing spot by all the fans who have their heads turned. Except for that guy one over from stage right, who couldn't give two fucks about a lousy dinger because he's just here for the sunshine and he doesn't know how he wound up in a baseball stadium holding an Indians backpack. An hour earlier someone asked him to hold the backpack for a second and then the person ran off, never to return, leaving this guy lost and very slightly burdened. It was a big home run, from a guy who has a reputation for these. Peguero therefore continued what's been a strong spring, underscoring exactly why spring training shouldn't be paid attention to too closely.

Not that Rick Rizzs hasn't already bought in completely. Said Rizzs after one of the dingers:

His plate discipline is a 180 from last year.

It's not just the charge that Peguero's plate discipline has improved. It's the "180" part. Implied is that Peguero's plate discipline now is the opposite of what it was last season. Last season Peguero had one of the very worst approaches in all of baseball, so a 180 would mean that these days he's Teddy fuckin Williams. One's suspicion is that Rizzs is getting a little ahead of himself. However, Rizzs has watched a lot of baseball in his day, so if he's developed a scout's eye, maybe he's seeing something before the rest of us, and maybe Peguero is about to become an MVP candidate, this year. You might say that's ridiculous, but caterpillars turn into butterflies. Lobsters don't age. Nature is ridiculous, and Carlos Peguero is natural.*

"I'm working to be patient at the plate and get a good pitch to hit and not hit a pitcher's pitch," Peguero said.

Baseball is so simple! All Peguero has to do is stop doing the thing that previously has made him bad. This makes for a handy reminder: it's encouraging when you hear that a player is working on addressing a flaw, but just because a player is attempting a change doesn't mean the player will change successfully and as desired. Not every attempt at developing a new pitch results in an effective new pitch. Not every adjusted swing makes the swing better. Not every attempt to not suck results in a player not sucking. Peguero's head is in the right place, but players with his demonstrated discipline generally don't figure it out. I'm not sure a single one of them has ever figured it out. Has anybody with Carlos Peguero's approach gone on to be good, ever? I think that's an honest question.

Nobody else on the Mariners hit a dinger. Raul Ibanez tried to score on a hit but he fell down and faceplanted rounding third base and there's video of Terry Francona chewing in the dugout but there's not video of that. Ibanez was picked up when Ronny Paulino followed with a run-scoring grounder, but not literally. Ibanez picked himself up, out of the dirt, after he fell down.

At one point in the later innings a fire alarm in the stadium sounded for about five minutes, and though it was dismissed as a false alarm, in reality it was detecting the Mariners' hot hot heat. The Mariners are so on fire right now they're not allowed to travel by airplane, or to protected wilderness.

On the mound for the Mariners, Danny Hultzen was fine, and Taijuan Walker was better. Hultzen loaded the bases in the first and issued two walks in the process, but he ripped off a 1-2-3 second and finished with four strikeouts. His fastball was observed to be not unlike his usual fastball and his secondary stuff was evaluated despite being thrown just a handful of times. Walker handled the third and the fourth and his fastball was getting into the upper 90s. He blew Lou Marson away with one horizontal bolide and he didn't allow a hit in two frames. There was talk that he flashed a cutter around 89-91 or so and observers said his stuff was good which is good because Taijuan Walker is a good prospect specifically because his stuff is good and it would be bad if his stuff weren't good anymore. Get as excited as you want to but don't come here to wildly celebrate the fact that Taijuan Walker struck out Cord Phelps.

In the sixth inning, a Ronny on the Mariners reached base thanks to an error by a Ronny on the Indians, which is something that might not have ever happened before. Also in the sixth inning, Hector Noesi pitched, and in the seventh inning, someone else pitched. In the ninth, Brad Miller reached on another error by the Indians' Ronny, so either that Ronny didn't commit the earlier error on purpose for funsies, or he did and was trying to cover it up and look less suspicious. It's about the game within the game. In the bottom of the ninth inning the Mariners put the finishing touches on another dominant conquest. The Indians were left to lick their wounds, which is gross.