Do you know how much it costs to acquire customized logo marbles? It's not an easy or inexpensive process. According to this website, if you want to order custom imprinted marbles, the price will be call for pricing. I haven't called but I'm comfortable in my assumption that the price is something I wouldn't want to pay unless I really badly wanted some custom marbles. If a company doesn't give you a listed price, asking that you call instead, presumably the price is pretty high, and listing it publicly would work as a deterrent. Once you're placing a phone call, you're more invested and less willing to start over somewhere else. The point I'm getting to is that the Brewers went to some trouble to get their own custom Brewers marbles. And Tuesday afternoon, the Mariners snatched them right away, taking all the marbles in a come-from-behind 6-5 victory. At this rate the Mariners are going to run out of room for marbles, and they might have to jettison a Yoervis Medina or something. I'm just kidding, Yoervis Medina is the herpes of Mariners 40-man relievers.

In 2011 for the Brewers, John Axford was a shutdown closer. In 2012 for the Brewers, John Axford was supposed to be a shutdown closer, but instead he blew saves and lost games. On Tuesday, Axford blew a save and lost both a game and marbles, as the Mariners rallied from a 4-3 eighth-inning deficit. After the damage against Axford had been done, the Brewers turned to Donovan Hand, because everybody else was giving the Mariners a hand and the Brewers didn't quite know what to do. That is without question the worst joke I have ever published on the Internet. 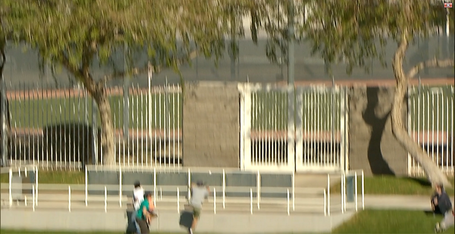 You'll notice that nowhere in that screengrab is a fence. Actually, a fence is featured quite prominently in that screengrab, but not the outfield fence. Smoak cleared the right-field wall by a considerable margin with an impressive dinger, sending a ball over the heads of the spectators. A few days ago, Smoak hit another dinger batting left-handed. For reference, last spring, Justin Smoak batted .378, but he hit zero dingers. He's up to two now, batting lefty, and it still isn't March.

It's not just that Smoak is generating results. It's that Smoak is trying to maintain the tweaks he made to his swing, the tweaks that allowed him to be so successful late last season, and we're seeing his actions pay off in the early going. I don't really care that Smoak recently doubled, because he pulled a double on the ground. Whatever. Dingers get my attention. It's important that Smoak figure out his left-handed swing, since that's the swing he stands to use the most often, and if Smoak is actually going to sustain some of his gains, then the Mariners will have a legitimate first baseman. The Mariners could have the legitimate long-term first baseman they thought they were getting when they traded for Smoak in the first place. It's still February -- IT'S STILL FEBRUARY -- but better to see Smoak not suck than to see Smoak suck. We like when Smoak hits dingers, and Axford isn't an awful pitcher. This was legitimate.

And also Gutierrez. Gutierrez batted in the third inning against Yovani Gallardo, who is ordinarily good. This is where Gutierrez put the ball: 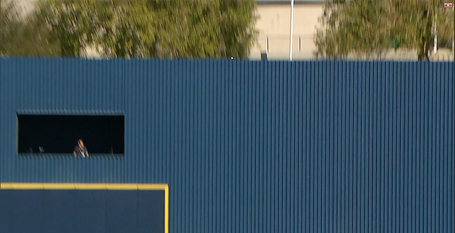 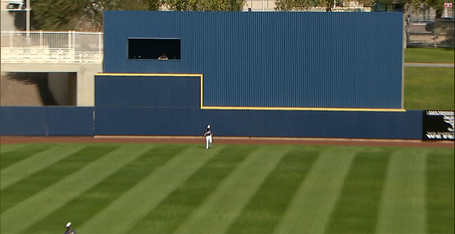 Dead center, over the massive batter's eye. This afternoon, on the other side of the country, Domonic Brown cleared a similarly massive batter's eye against the Yankees, but we don't care about Domonic Brown. We care about Franklin Gutierrez, and let there be no wondering whether or not Gutierrez has his strength. When Gutierrez was a good player, way back when, every so often he'd unload with a moonshot. This was another, and this isn't a home run Gutierrez would've been capable of in 2011. This is a guy at or near 100 percent, and I think some people have forgotten how valuable Gutierrez can be when he's going good.

Of course, that's the whole problem -- Gutierrez has seldom been going good, on account of the gypsy curse. But there was too much trade talk this past offseason for my liking, because that wasn't the time to send Gutierrez away. His stock was low and his upside is significant, and what's more, the Mariners hold a $7.5 million 2014 club option. What if Gutierrez doesn't have another freak accident? What if he actually gets into 120 or 130 or 140 games? This is a legitimate, talented center fielder, who can run and hit for power. A healthy Franklin Gutierrez is one of the Mariners' very best players, and a healthy Franklin Gutierrez could be a driving force behind surprise 2013 contention. The gist: if you want to get swept away by optimism, think about Justin Smoak and Franklin Gutierrez staying healthy and hitting dingers. They hit big dingers today, off good pitchers, and we're too willing to not ignore these to ignore these. As long as we know there's talent lingering behind Gutierrez's injury problems, we'll want to believe in him.

Michael Saunders also hit a dinger right after Franklin Gutierrez hit a dinger but Saunders' dinger was fairly ordinary and apparently I'm already taking Mariners dingers for granted. The human brain is an unbelievable thing. The anticipation of future dingers has taken some of the shine off of present dingers. Also taking some of the shine off present dingers is that it's February and I don't know if I've mentioned that yet.

If you need something to keep you feeling somewhat cynical, because all this optimism strikes you as weird and unfamiliar, Michael Morse started in right field and came out after five innings. In those five innings, the Brewers hit four extra-base hits to right field, three in the bottom of the second alone. The first was a double that dropped right in front of Morse. The second was a double that dropped further in front of Morse. The third was a double that was a liner to the gap, where Jean Segura tested Morse's attention and arm. It was basically a stretch-double. The fourth was a triple that Morse never could've caught, but he was slow to get to the ball and he appeared to fumble with it in the corner. There will be so many days that Michael Morse plays outfield defense for the Mariners. There could be some days that both Morse and Raul Ibanez play outfield defense for the Mariners. Michael Morse is extremely lovable if you're willing to overlook the things he doesn't do well at all for a baseball team. Based on the Munenori Kawasaki example, we're all very willing to overlook the bad so I guess Morse has that going for him.

Other Mariners hit and several Mariners pitched. Hisashi Iwakuma threw an inning that was good and Joe Saunders threw an inning that wasn't. Kameron Loe threw two innings that were good and apparently, according to the box score, Oliver Perez was charged with a blown save in the bottom of the third. Carson Smith got the win with a scoreless inning, Bobby LaFromboise got a hold despite coughing up a dinger, and Danny Farquhar recorded the save so I guess he's a proven closer now. Note that the ninth inning is only considered special once the regular season rolls around. In spring training no one gives half a fuck. In many ways, spring training is worse baseball, and in some ways, spring training is better, more progressive baseball.

Tomorrow, the Mariners play someone, and I think Danny Hultzen and Taijuan Walker are scheduled to pitch. But be sure to tune out quickly because shortly after Walker comes out, Hector Noesi will come in. I think it's funny how quickly we all turned on Hector Noesi but in our defense it's completely his fault. Win us back, Hector. Or give up really hard contact in pitcher-friendly counts, you know, whatever, it's your life.