Everybody knows that they shouldn't pay too much close attention to what happens in March. However, no one ever says anything about February, so the only reasonable conclusion is that games in February must be meaningful. And today that's good news for us, because this February afternoon the Seattle Mariners beat the rival Los Angeles Angels 9-8. I take it on faith that the players most responsible for the Mariners' victory are actually Mariners property because they were most certainly not the Mariners' regular players.

So if you were crossing your fingers and hoping for the end of jokes about marbles, I'm sorry, but the Mariners have once again preserved their marbles, rather than coughing them up to the opposition. It's unclear whether they have also claimed the Angels' marbles? Did the Angels have marbles prior to this afternoon's action, or were they simply playing for the marbles in the Mariners' possession? All these beat writers on the scene in Peoria, and not one question I've come across regarding the marbles being exchanged, or, presently not being exchanged. 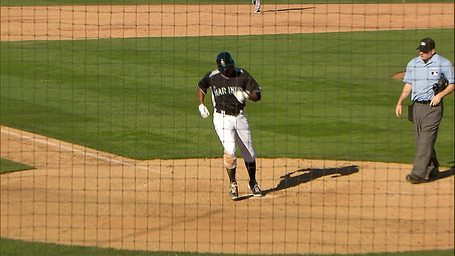 That's Francisco Martinez scoring from third on a Julio Morban single. Martinez didn't celebrate at the plate, nor was he mobbed by teammates. There was to be but a simple exchange of high-fives and handshakes, which makes sense given the context of the game, but it also seems a little overconfident, in that who's to say the Mariners will beat the Angels even once during the regular season? I'm just saying, maybe this one should've been savored a little more than it was. Who's to say what tomorrow might bring? Who's to say there will be a tomorrow? Celebrate what there is to be celebrated because at the end of the day you reach a point at which there are no more celebrations.

The big story a big story a story a thing that happened is that Jeremy Bonderman got an inning of work for the first time in years. His third pitch was hit for a single. His twelfth pitch issued a walk. His sixteenth pitch was whopped for a dinger. Bonderman hung a 1-and-1 slider to Hank Conger and Conger can do a lot more damage than whoever or whatever Bonderman has been throwing to during his time away from the game. Bonderman's fastball hung out in the high 80s and it's probably too early to be worrying about Jeremy Bonderman's fastball so let's just say today technically could've gone worse and move on from there. None of Bonderman's body parts fell off and now he knows not to hang 1-and-1 sliders to major-league hitters. Maybe that's one of those lessons you forget when you've been away for a while.

Brandon Maurer threw an impressive inning of relief as his fastball got up to 96. Of course, this was Maurer in a one-inning relief appearance, not a start. Of course, it's also still February, and no one's 100 percent. Here is a completely unhelpful .gif of Maurer striking out Trent Oeltjen swinging. This was the 96 mile per hour heater.

Maurer subsequently got hit in the leg by a comebacker but he was fine or he was badly injured and did a fantastic job of hiding it. Either way, that's big-league material.

Justin Smoak doubled but he doubled on a groundball so nobody cares. On that same double, Jesus Montero got thrown out at home trying to score all the way from first. Here's how Jesus Montero reacts after having to sprint most of the way around the bases:

Here's a weird double play where I guess Dustin Ackley was seeing if Brendan Ryan was paying attention:

That was in the second inning, so Brendan Ryan hadn't yet hit his home run. After his home run, I'm sure all he was able to think about was his home run. Brendan Ryan hit a home run in his first plate appearance of the spring. Of course, he hit it off Chad Cordero, who's sort of an approximation of Jeremy Bonderman in terms of what he's trying to do. When you're working on your big-league comeback, it doesn't matter what month it is -- you don't want to be seen giving up dingers to Brendan Ryan. So now we know that Ryan's adjusted swing is capable of not-pop-ups. The swing Ryan had last season was not.

There were other events. The Angels sucked real bad at defense and Dustin Ackley tripled to left-center field somehow beyond Mike Trout's omnipresent grasp. Jason Bay made a diving catch in one of the least graceful ways possible. Alex Liddi clobbered a massive dinger off whoever Matt Oye is. In five career triple-A innings Oye has allowed ten runs and 12 hits. I'm not saying it's a bad thing that Liddi homered off Oye; I'm saying it would've been a bad thing if he hadn't. Somebody named Mark Sappington threw a couple wild pitches in the same at-bat in the bottom of the eighth. In order to settle things down, the Angels called on a reliever named "Fritz", so of course he hit the first batter he saw. "His control is on the fritz," they'd say, if anyone ever talked about Ben Fritz. Brian Moran was the winning pitcher and his fastest pitch was 86 miles per hour. Guess his handedness!

So the Mariners won again and tomorrow they'll play and probably beat the Brewers. The Brewers might as well give up, although that would be bad news for Hisashi Iwakuma, who would probably like to pitch to players. Scheduled to follow Hisashi Iwakuma is Joe Saunders, and he'd probably like to pitch to players too. If the Brewers were to forfeit Iwakuma and Saunders could always pitch to Mariners in an impromptu intrasquad, but it's just not the same without that sense of intersquad competition. The Mariners are family. Who could compete against family?