The First Time: A Comparison

Share All sharing options for: The First Time: A Comparison

Some while ago I booked a trip to Boston for last week. I wanted to see my brother, I wanted to see one of my friends, and I wanted to see a little of the New England winter weather that I've missed since graduating college. I intended to forget about baseball entirely for the duration of the trip, because such opportunities come few and far between and one can't let baseball consume his entire life. However, two Fridays ago, the morning before I was due to take off, I received an email from a producer for Clubhouse Confidential. For those who don't know, it's a show on MLB Network hosted by Brian Kenny, and Dave Cameron's been on as a guest a bunch of times. The producer wanted to know if I'd be available for taping the coming Wednesday, which would be the Wednesday I'd be away. He wanted me on the show to talk about something I'd recently written for FanGraphs. I agreed to do it, because while I didn't want to think about baseball while I was in Boston, it's not very easy to say no to TV. I've never done it!

So the producer found a studio for me near Boston, and I packed a suit into my luggage. I'm no stranger to radio, but this was to be my first-ever time on television, and I grew increasingly nervous. Tuesday night and Wednesday morning, I prepared, and Wednesday afternoon, I made my way to the studio and spoke on camera. Once it was all over, I realized this was the sort of experience worth writing about. I don't have my own personal blog, so I'm putting this here, and you're free to skip out now if you haven't already. I'm not going to be offended if you don't want to read a guy talking about his first time on television. I'm not just going to write a longform summary of the afternoon, because I don't think that would be very interesting. Instead, here are some similarities between my first time on TV and one's first coital encounter. That's "one's", not "my", mom, so stop freaking out. I'm sure I'm probably saving that until I get married.

I sought the wisdom of those more experienced
As soon as I agreed to come on the show, I reached out to Dave and Grant Brisbee, who I know have been on the show before. The gist of my messages: "what do I do?" The gist of the replies was simple enough: "be comfortable and concise." I would, after all, just be having a conversation about baseball. This is my field. It shouldn't have been weird, but it felt weird, and I looked up to those who had already been on the air. Dave also made sure to tell me to blink. It was actually the first thing he said. For those of you who haven't seen Dave on TV, Dave talks and stares at the camera like the camera is a bear and Dave is a solo hiker lost in the woods. It didn't matter to me how these people had been in their experiences on camera; it just mattered that they had been on camera.

Once the camera was rolling, I forgot all the instructions
Everything I'd been told, all the prep -- once Brian Kenny asked me the first question, my mind went blank and everything came out on autopilot. I knew how I wanted to begin, but it wasn't how I began. I knew I wanted to blink, but I'm pretty sure I forgot to blink. I knew I was supposed to hold eye contact on the camera the entire time, but I went natural and started shifting my eyes to the side, like I do in conversation because it's weird to hold eye contact for more than several seconds. It's one thing to know, and it's quite another to do, and when you're in the moment, all you can think about is how you're in the moment and you better not fuck it up.

There were twists I didn't expect
Initially, I was to come on to discuss the effect of moving in the fences in Petco Park and Safeco Field. That was fine -- that was something I'd be comfortable talking about. The Tuesday night before I was to go on, I was at dinner with a friend, and I got a call from the producer that they also wanted me to talk about ranking the general managers. I couldn't be less comfortable ranking general managers, and in fact I don't think we're really able to do it and do it well, but whatever, I came up with a top-5 list and was prepared to defend it. When I got to the studio, I went over my list and reviewed my talking points. Then, when the action began, I was told I wouldn't be presenting a top-5 list -- I'd be responding to Brian Kenny's list, identifying points with which I disagreed. I didn't see this coming, but I couldn't exactly say "nahh".

It was over quickly
I got to the location around 2:45, and then I hung around in a dressing room for a while before I went into and sat down in the room with the lights and camera. There, I got my earpiece, and my suit was adjusted, and I talked to Brian Kenny and the producer prior to rolling. Then we got started, and I said some words about ranking general managers, and I said some more words about ballpark dimension adjustments, and then I was done. I had never before been on TV. I answered a small handful of questions, and then I was officially experienced with TV. Dave had told me that sometimes it can drag. I understand now it isn't the live part that can drag. It's the waiting part and the prep part. The live part is over in an instant.

I wanted to tell everyone
Look, I'm doing it right here. I can't stand the idea of self-promotion and I'm very conscious of the unpleasantness of arrogance, but I just wanted everyone in my life to know that I was on TV. I looked for reasons to bring it up, and then when there weren't reasons, I brought it up anyway. I did manage to get myself under control after a little while, but during one phone conversation with another friend about an unrelated matter, I blurted out "IwasonTVyesterdayafternoon" before I could realize what I was doing. Everyone was very warm and excited and inquisitive, but I don't know what happened to me. I can't remember feeling that feeling.

I wanted almost constant feedback and reassurance
Dave mentioned to me that if I were doing anything wrong during filming, someone would let me know through my earpiece. No one ever said anything, and as I spoke and in between speakings, no one really said a word. I had no idea whether I was doing a good job or a bad job, and when I was done, I was given no evaluation. I wanted to hear that I did great, or that there were certain things that needed improvement. Instead, I talked and stopped talking and got in a car and left.

I don't want to see a tape of myself
When I was finished, a guy at the studio said he wished he could give me a DVD, but for whatever reason it wasn't possible. I didn't mind, and when the show aired for the first time later that afternoon, I didn't watch. I did receive a very flattering screenshot from a friend of mine: 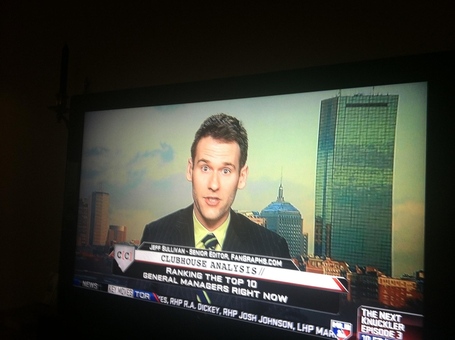 Later, around 6:30, I went to a dinner at the same friend's apartment in Beacon Hill, and it came up that I had just been on TV, because I was still wearing the same shirt. At 7:30, my friend decided to turn the TV to MLB Network so we could all watch a repeat of my segments. As soon as I saw myself come on I had to turn away and look at my hands. You know how no one likes the way their voice sounds when it's recorded? Take that and add video footage. I don't think I was feeling embarrassment; I think I was afraid, afraid of knowing how bad I screwed up. If someone presents me with a clip, I imagine I'll say "thanks, but no thanks." I don't want to watch me fumble around on camera.

I didn't know what to do when I was finished
It was obvious to me when my speaking turn was over, and after I talked about ballpark adjustments, Brian Kenny and I bid farewell to one another and I got my earpiece taken out. The camera was shut off and I was free to go away. I didn't know whether to linger or make a hasty exit, whether to strike up a conversation or look for some sort of souvenir. No one told me what to do and after a few minutes of standing around I made my way for the door.

Now, earlier, before we started recording, I was told to button my top button. I hate buttoning my top button, because it's uncomfortable and I have an unusually prominent Adam's apple. I also couldn't button my own top button, because an old brain injury has reduced the sensation in my left hand. I had to ask for help, and the guy who led me into the studio tried to do the button, and failed, because I don't know why. Probably mascot fingers. He subsequently asked for assistance from a woman in the other room, who he described as having "nimble fingers." She came in and managed to get the shirt buttoned after a few minutes of me turning and craning my neck. I was all set and ready to go, and then we filmed the two segments. As I was leaving, I said my goodbyes and thank-yous. As I walked by the woman's desk, I told her "have a good rest of your day, and thank you very much for the fingers." She was a wonderful lady, and I hope I never see her again for the rest of my life.