When Discussing A Felix Hernandez Contract

Share All sharing options for: When Discussing A Felix Hernandez Contract

Publicly, I can't think of any developments in negotiations between the Seattle Mariners and Felix Hernandez regarding a contract extension. Here's where I presume things stand: the Mariners have made certain numbers known, and Felix's representation has made certain numbers known. The Mariners, at present, are willing to offer X years. Felix's side, at present, would like X + Y years, where Y is probably two. I doubt they're separated by too much on average annual value, but I could be wrong. I'm not clued in, and for all I know they're on the verge of an announcement, or they couldn't be further from an announcement.

So, there's not a lot to talk about here, in terms of new news. But there's really no new news at all with the Mariners, and Felix's potential extension is a talking point. Felix is great, the Mariners need great players, and it would be terrific if Felix could be a great Mariner for a while. Fans would love to see the Mariners give Felix an extension, and so fans have been talking about terms. We've done it here, and others have done it elsewhere.

There's something I want to touch on, and it's the way people feel about contract terms. To be honest, this post isn't specific to Felix -- it applies to all such contract discussions, for extensions and free agents. In a way, trades, too. But Felix gives us an example to work with. There was that rumor a little while ago that the Mariners were thinking about offering four years and $100 million, on top of what Felix is already set to earn over the next two seasons. A lot of people would've been in favor of that, while I'm guessing some would not be in favor.

I was emailing with a journalist friend the other day, and I was asked if I'd be willing to guarantee six years, in addition to the two. I responded that if that's what it would take, I'd probably do it, but I'd be incredibly nervous, and I'm also too emotionally invested to be reasonable here. I'd prefer five and a vesting option. I'd really prefer four and two vesting options. Or, selfishly, nothing but vesting options for life, kicking in as long as Felix's surpasses 180 innings. That way Felix could be a Mariner until he's 50 if he's healthy enough and effective enough.

Some people, though, draw lines. Many of you might be included. You might say you'd do four, but you absolutely wouldn't do five. Or maybe you'd do five, but you absolutely wouldn't do six. You might say you'd never give a guarantee to a pitcher extending seven years into the future. Too risky, pitchers. You wouldn't want to go to X years, or $Y million. You see things as being somewhat binary. If Felix were to get one contract extension, you'd like it. If Felix were to get a bigger contract extension, you wouldn't like it.

These things aren't binary. Precious few things are binary, in truth, and a contract is all about whether or not a player will be worth the terms. This, to me, is how these things need to be considered: 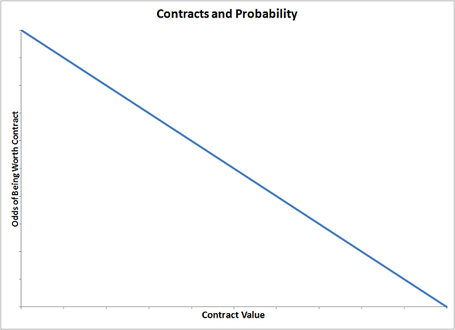 Everybody wants to give contracts they think the players will earn. Players generally want to sign for as much as they can. As the value of a contract increases, the odds of the player being worth the contract decrease. Realistically, most negotiations take place around the middle of this graph. There are exceptions, but teams and players aren't crazy or unreasonable. It's sort of a tug-of-war from either end of this sloping line, and most contracts end up in the neighborhood of there being 50 percent odds of the player earning it.

Too many people treat these things as step functions instead of smooth lines. Let's go back to Felix. Let's take a hypothetical fan who'd be happy to give five years, but who wouldn't give six. The odds of Felix earning a six-year contract would be lower than the odds of his earning a five-year contract, because players break down and pitchers especially break down, but we're not talking about a drop in odds from like 90 percent to 10 percent. We're talking about a much smaller shift, even if it's a shift we can't quite put a number to. There is no point at which the slope of this line drops off dramatically. It's all smooth, and you'd never talk about a contract near either extreme.

Again, this applies to all contracts. It's all shades of gray, if you will, and it's healthy to understand that. And you can mold it to apply to trades. Change the X axis from "Contract Value" to "Resource Value" or something. Take the Justin Upton trade that got blocked. I don't think it's fair to say the inclusion of Taijuan Walker makes it or breaks it. The value of the players going away just changes the odds of the player coming back being worth the sacrifice. A Mariners package featuring Walker probably would've been around 40 - 50 percent. But that's admittedly pure guesswork.