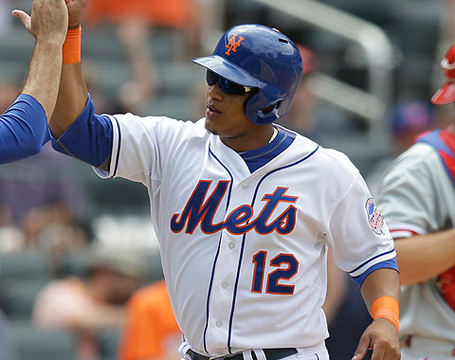 The Seattle Mariners need outfield help. Badly. With Shin-Soo Choo now off the market, Nelson Cruz signing with Seattle seems almost inevitable. This would be awful, because then the Mariners would have 2, possibly 3 (depending on how they view Morrison and Hart) outfielders who do not play the outfield well defensively. Michael Saunders would be the center fielder, where he has a career UZR/150 of -5.5 (per Fangraphs). Franklin Gutierrez should certainly provide some insurance, but I personally believe Guti would serve better as a corner outfield platoon with Morrison, starting against left-handed pitchers and providing as a backup at all three positions, which would allow him to rest 3-4 days a week. This leaves the M's with Saunders at center, and while that wouldn't be the worst possible scenario, it would certainly be better to move Saunders to right field where he has had much better defensive ratings. In order to do this, the M's need to acquire a new center fielder.

Juan Lagares is a center fielder with the New York Mets, and will be just 25 years old by the time the season begins. He made his major league debut with the Mets in 2013 and in 121 games, produced a line of .242/.281/.352 with a wRC+ of just 75. However, Lagares is known much more for his glove than for his bat, producing a UZR/150 of 33.1 in center field last season as well as displaying a wicked arm. Fortunately, there is still hope that his bat will come around, as he hit very well in almost all levels of the minors and hit .353/.408/.529 in the majors this last July. Plus, last year was only his first in the bigs, so he still has some potential developing to do and should be cheap and under team control for a while down the road.

A few drawbacks for Lagares are that he does tend to strike out quite a bit, producing a 22.8% strikeout rate in 2013. His 4.8% walk rate also leaves something to be desired, but his career K% in the minors was something closer to 15% so perhaps he can make some adjustments and get that down closer to his minor league mark.

Players who are good defensively but poor with the stick tend to be undervalued, so I don't imagine the cost for him will be through the roof. In a winter simulation I'm particpating in, I just managed to acquire Lagares for Erasmo Ramirez and Lucas Luetge, which might have even been somewhat of an overpay on my part (remember that that's just how one Mets fan valued Lagares and it remains to be seen how the Mets organization percieves his value). If the M's can dangle a couple of their young-but-unspectacular arms to the Mets they might be able to find some common ground. Lagares had a 2.9 WAR in 2013, and that was with his 75 wRC+. If he can improve his hitting just a little bit, he should be at least a 3.0 WAR player going forward at a huge position of need for the Mariners.

Juan Lagares is exactly the kind of player Jack Z would have loved in 2009-2010, but it's been a while since Jack Z has acquired a player who is better with the glove than he is with the bat (Brendan Ryan, Franklin Gutierrez). But 2.9 WAR that was almost completely supported by defense is awesome, and he still has a lot of time to improve his work at the plate before reaching his prime. Acquiring Lagares would also allow Saunders to move back to right field, and would give the Mariners an outfield of Gutierrez/Lagares/Saunders when facing left-handed pitching. Against right-handed pitching, Morrison/Lagares/Saunders would still be at least a respectable defensive set-up and would avoid playing two terrible defensive outfielders in the corners as it looks like the Mariners might employ.

Outfield help does not need to come in the form of Nelson Cruz, and this just goes to show that there are always other creative ways of filling roster holes. Go Mariners.

Do you think the Mariners should try to acquire Juan Lagares?