About those Nelson Cruz rumors

A report out of a Venezuelan newspaper claims Nelson Cruz is close to signing with the Mariners. Not so fast.

Share All sharing options for: About those Nelson Cruz rumors

We've all known the Mariners have been wittingly and unwittingly linked to Nelson Cruz throughout the entire offseason, and everyone knows why: the Mariners 1) seem to need another serviceable outfielder, 2) covet a right handed power bat for the middle of the order, and 3) are running out of options for these needs as the free agent market dwindles. So the best way to solve this problem has apparently been to look at a sheet of paper with OUTFIELDERS written on the top, after which they can cross off all the LEFT HANDED HITTERS, and finally see what remaining name produces the most hits on a Google search, because how else do you categorize a free agent signing as a "splash" or not? BAM! Nelson Cruz, Mariner.

We also know why Nelson Cruz shouldn't be a Mariner, especially with his rumored price tag, which could be around the 5/$75 million offer he supposedly turned down from the Mariners a few weeks ago (an offer that apparently didn't happen). Now, that was a few weeks ago, and since he's still on the market, he could be looking for something closer to 4/$60, according to insider chatter. Whatever he ends up getting--if it's anywhere near that--is going to be an overpay for a 33 year old player coming off a PED suspension who has decent numbers in a hitters' park that really aren't anything special and will cost a draft pick oh god, why are we still talking about this?

But Choo's signing with Texas does mean two things for the Mariners. One, the best bat that they had been linked to is now off the market. And two, by signing with Texas, Choo has eliminated any possibility of an Arlington return for Cruz, regardless of how likely that had ever been in the first place. Cruz is going somewhere else, and it's probably going to be an overpay. And that place, according to just about everyone who writes about baseball for a living, is Seattle.

Look, I'm not doubting that someone in the front office pulled up Cruz's player card and got googly eyes when they saw 27 home runs. And I wouldn't be all that surprised to see Cruz wearing a Mariners uniform in a press conference next month. But he's not a Mariner yet, and just because he's been endlessly linked to Seattle doesn't mean he's going to end up on the team. I hope.

This weekend, I got to see one of these rumors take flight in real time, which was pretty exciting and enlightening. First, a tweet from USA Today's Bob Nightengale, from Saturday night:

The #Mariners, it would seem, are now in prime position to sign Nelson Cruz with Choo going to Texas

Nothing wrong here, at all. Simply stating an opinion, claiming it SEEMS the Mariners could be set up well to sign Cruz with Choo off the market, following the same logic from a few paragraphs back. Then, quickly, a response from NBC's Hardball Talk blog, saying essentially the same thing. This chatter continued slowly over the weekend and into Sunday, and quite possibly influenced this article, from Venezuelan news outlet El Universal: 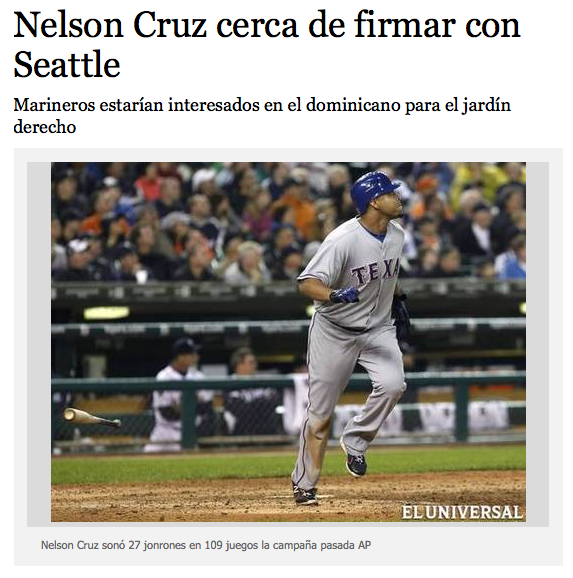 Or, "Nelson Cruz close to signing with Seattle." Close to signing! Wow! Naturally, this got picked up by a few people on twitter and the like, and what do you know, Cruz is on his way to Seattle. Meltdown time. But not so fast. Let's check out the lede from the article (via google translate...sorry):

The Seattle Mariners are still one of the busiest in the winter in all MLB teams, and now want to Nelson Cruz as a right fielder.

The Mariners seem to have all the ground gained for this contract, after the Rangers signed Korean Shin-Soo Choo to seven-year, $130 million, so it appears that (the Rangers) leave behind their employment with Cruz.

The rest of the article continues like this, see it for yourself. It's nothing new! Everyone relax. There are no sources named, no actual breaking news stated outside the headline, and ultimately, nothing new to worry about...yet. Nelson Cruz is still just a free agent who has been linked with Seattle more than any other teams simply because of perceived need on behalf of both parties: The Mariners' desire for a right handed power bat, and Cruz's desire for a lot of money via a team known for making risky offseason decisions.

Which is, I guess, the point of me writing any of this. I'm not saying Nelson Cruz isn't coming to Seattle. No. I'm saying that Nelson Cruz isn't a Seattle Mariner yet, and daily reminders of that will continue in my head until he signs a contract with whoever he ends up signing a contract with. So don't get too carried away reading these rumors today. We'll have plenty of time to worry when it actually happens.