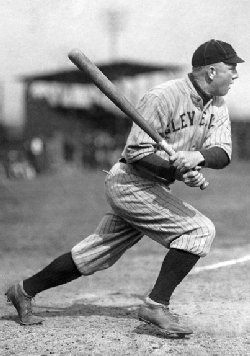 The Voting For The 1922 All-Star Series Is Open!
https://www.surveymonkey.com/s/ASG1922

In the fifth battle of stars in the annual "Mid-Summer Classic," the American League plated four runs in the first inning, exploded for five tallies in the sixth, and then staved off a late rally by the senior circuit to hold on to a 10-8 victory at Cleveland's Dunn Field. Indians skipper and center fielder Tris Speaker, filling in for an injured Ty Cobb, led the way with three hits, three runs batted in and two runs scored and was named the game's outstanding player.

The junior circuit has copped the last two contests to take a 3-2 lead in All-Star play. The Nationals will host next year's game at Pittsburgh's Forbes Field and it'll be interesting to see if Pirates president Barney Dreyfuss will be willing to add seats to his venue in an effort to increase attendance past the 25,000 that Forbes currently holds.

Highlights and outstanding players from this year's game include:

Cast Your Vote For the 1922 All-Stars!
Make Your Voice Heard!

Every April, baseball springs forth from the doldrums of winter to rekindle our interest in all things warm and green. And as spring melts into summer, the baseball world becomes more abuzz with the excitement of seeing the Game’s brightest stars all assembled on a single field to play what has become the most anticipated and important match during the regular season. It is the All-Star Game.

On Tuesday, July 11, 1922, these most stellar of stars will gather at Forbes Field, home of the Pittsburgh Pirates, to play in what can be rightly called the "Midsummer Classic." And the starters, including three pitchers, for each side will be selected by YOU, the loyal and knowing fan! Voting is taking place RIGHT NOW!

The games will be played using Out of the Park 14, and the game account and box score will be posted over at Seamheads.com.

Vote for the 1922 All-Star starters and pitchers here:

Voting will be open until 3:00 a.m. EDT on December 6, 2013. At that time, we will count up the votes, put together the rosters, and sim the game.
To learn more about the Retroactive All-Star Project, visit SABR.org/retroactive-all-star-project/about.