The manager search has narrowed to five with a decision due by the end of the week.

Share All sharing options for: Manager watch: The final five

After about a dozen names being floated around, it seems like the Mariners are close to a decision on who their next manager will be. Today, there's reports that not only have the Mariners narrowed their decision to four candidates, but a decision is due by the end of the week. The latest addition to the finalists is Dodgers third base coach Tim Wallach, who is expected to receive a second interview. He'll join Joey Cora, Chip Hale, and Lloyd McClendon as the four finalists. To the tweets:

Wallach is another relative unknown, having some PCL managing experience and winning manager of the year in 2009. I have no idea what his managerial style is, but I do have about 40 of his baseball cards. That's the same for Cora and McClendon, and there's surely some Chip Hale cards from those massive sets in the early 90s too. It's strange to think that every remaining candidate for the Mariners played professionally in the 90s, and whichever candidate gets hired, I will have placed his card into an Ultra-Pro 9-sheet.

Maybe there will be another candidate to get a second interview as well. There hasn't been any news about Ron Wotus and a couple other guys, but that would ruin my catchy title. So it's three newcomers and one retread. My completely uninformed guess would place Chip Hale as the favorite, given that the organization has been after him before and reached out to him early on this time around. Then it's probably Cora because 1995, and then Wallach and McClendon. Whatever the case may be, it's about time for it all to be over. Excuse my indifference until I know what these guys are all about.

UPDATE: Greg Johns is reporting that there's another finalist: former Mariner Rick Renteria, who played on either side of 1990, but doesn't have a card in 1990 Donruss. At least he has one of those oversized '89 Bowman cards. Make that five candidates I stuffed in Ultra-Pro 9-sheets, this being the one that didn't fit. 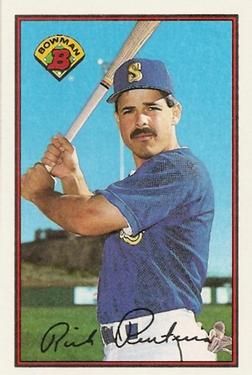