Share All sharing options for: So, what happened to Nick Franklin in 2013?

Either Nick Franklin or Dustin Ackley will be traded this offseason. I personally hope it doesn't happen, but for an extremely divided fan base, it seems to be  about the only thing most people can agree on—not that we make the decisions around here, obviously.

Though we don't all agree it should happen, the Mariners are in desperate need of talent, and not all of it can be acquired via free agency, so it stands to reason the Mariners will deal from an area where they seem to have two guys to fill one spot.

To ship either one of them out now would be to sell relatively low, but it isn't the only reason I don't want either to be traded. It'd be fun to see Ackley, this regime's first draft pick, turn his career around here—and with Franklin, he seems to have an attitude few else have within the organization. The Mariners, for good or bad, are short on brash and confident players. While Nick Franklin doesn't do a lot of talking—few in baseball do—the way in which he carries himself when things are going right yells "This is what I do, and I'm damn good at it."

In a book I'm reading on the 2010 Clinton Lumberkings, someone asked a younger Nick Franklin about this attitude that comes off him in waves. His reply:

"Some people think that I'm cocky or whatever...But I'm not. It's just, I've never really failed. Why am I supposed to think that can happen when it never does?"

Well, obviously, now it has.

But for anyone who'd like to point out "This is it, let's see how he reacts when he really struggles," I must note it's happened before. In Franklin's first stretch at AAA, 64 games and 296 plate appearances in 2012, he ran a .243/.310/.416 triple-slash and posted a 85 wRC+. He also struck out in 23 percent of his plate appearances. It isn't too different from the .225/.303/.382, 90 wRC+ and 27.4 percent strikeout rate he put up in the majors this year. Of course, adjusting to major league pitching is more difficult than the AAA counterparts, but it makes sense he'd struggle more at the game's highest level.

But, this post isn't about why Franklin will rebound in 2014 like he did at the beginning of 2013, I want to look about what happened during his up-and-down—and then down some more 2013. Why did he succeed, and what changed?

The most obvious answer is, pitchers adjusted and Franklin didn't. And the first part of this is true, and maybe the second half is too—but there's more detail to it. It's true that pitchers threw Franklin less heat as the season went on: according to Brooks,  66.51 percent of pitches he saw in June were classified as non-breaking and non-off-speed "hard" pitches. It was 63.70 percent in July, 59.62 percent in August and 61.70 in September. So there's certainly a noticeable decline, and one that could make a difference.

But when I think of pitchers adjusting, or a so-called "book" developing on a hitter, I imagine someone finds out what a hitter isn't good at, and then exploits it. And there's something weird about Nick Franklin and non-fastballs—he had no problem with them at first, and then he was hopeless.

Returning again to Brooks, here's what Nick Franklin did against off-speed and breaking pitches around the zone, broken down by whiff rate. We're going just against righties, because it makes the zone breakdown comprehendible and it's the side from which Franklin is most productive. 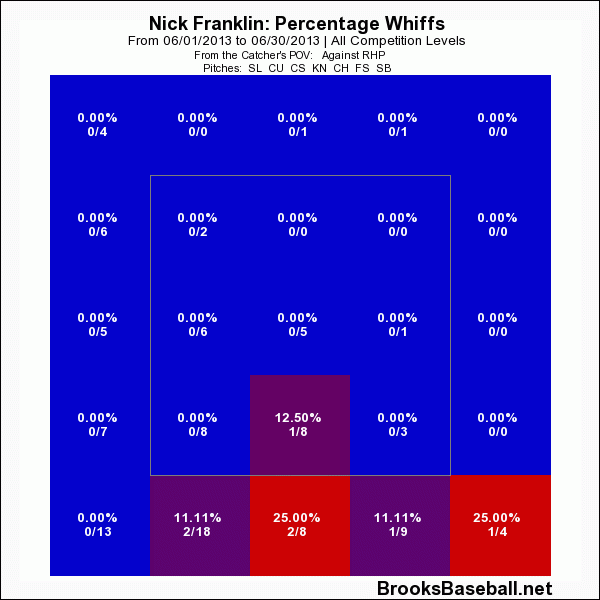 The sample size is small, naturally. You're going off a single month, and then really diving in. But look at pitches away—in the two left-most columns, Franklin saw and swung at 69 off-speed and breaking pitches and failed to make contact on just two of them.

Franklin's plate coverage in June was borderline-absurd. Per Minor League Central (don't let the name fool you—and thanks, Logan), Franklin made contact on 69.6 percent of pitches outside the zone in June.

So how did that change? We'll take a broad look first. Here's how that same chart, whiff rate on non-fastballs from the left side, looks after June: 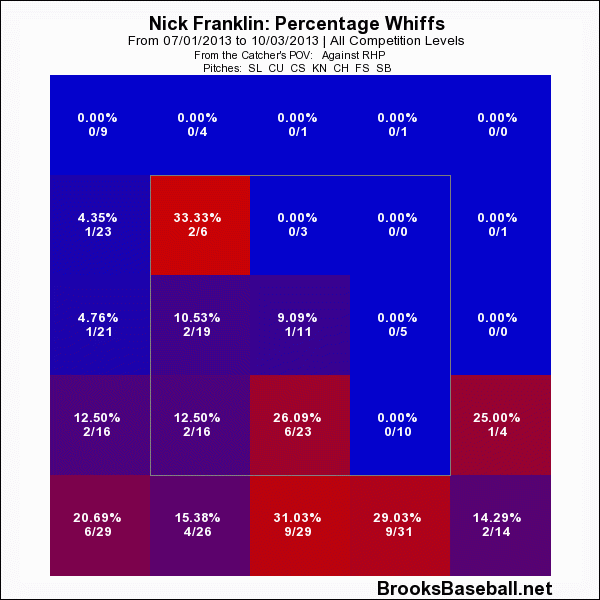 Yeah, you're starting to see some blood—a little more in the areas where there were no struggles, and then a lot more where he already had some problems. But while this doesn't look like an overly dramatic shift, the chart below may change your mind. Here is Nick Franklin's whiff rate against hard, breaking and off-speed stuff broken down by month: 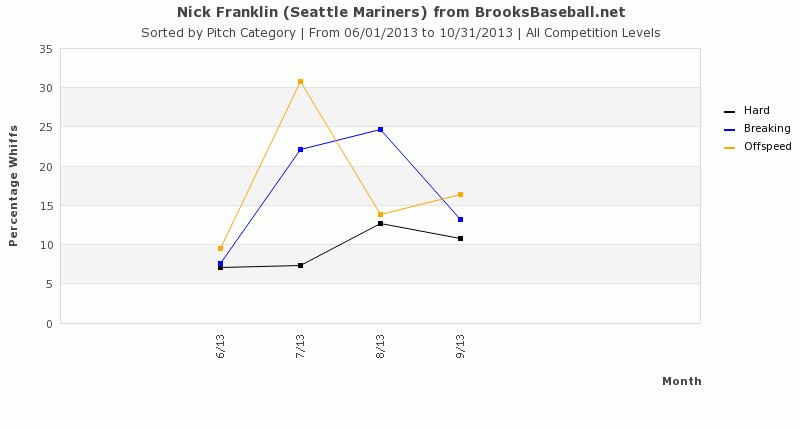 As Franklin's success against the non-fastballs faded, his overall contact rate plummeted. It went from 83.5 percent in June, the highest month of his professional career given a non-miniscule sample, to 73.9 percent in July. It would slip further, to 67.3 percent in August, when he put up a wRC+ of 12. Yeah, 12. He somehow managed a 105 wRC+ in July despite those monstrous struggles against non-fastballs and the accompanying 36.3 (!!!!) percent strikeout rate.

So what else is there to see—why did it all go wrong? It's all so intertwined it's hard to tell what caused what, but Franklin's plate discipline seemed to go despite a non-horrendous walk rate of 9.7 percent in August. He only swung at 22 percent of the pitches outside the zone in June, but that climbed to 29 percent in July and then 32 percent August.

You'll notice that in the last two paragraphs, I'm leaving out September. And that's because, while Franklin's September numbers are nothing to be proud of, you start to see a bit of a bounce back from the floor that was August. He put up a 91 wRC+ and lowered his strikeout rate some (still 26 percent).

While I hope Franklin's September is a sign that he's figuring things out, you just don't know. There is, after all, the fact that Franklin's mighty struggles coincide with him bunting a ball off his right knee July 6th. And then he gouged the other knee during a play at the plate in August. But, honestly, I bought into Justin Smoak's 2011 thumb injury and even Dustin Ackley's 2012 bone spur a little—I'm not going to give this too much thought now. There's something here that does make me wonder if it is swing-based, and maybe an injury throws him off, but you just can't bank on it.

So where does all of this leave us? I don't know. I mean, I know Franklin was helped greatly in June by his ability to make contact, especially against non-fastballs, but after that I don't know. I don't know where to go from here, figuratively or literally (anyone know where you can see splits on the counts a hitter faces?). Could it be sequencing? Absolutely. What about where he's being pitched? Also a possibility as pitchers did move more outside the zone as the season went on.