Buy yourself a Mariners jersey on eBay

My search for obscurity.

Share All sharing options for: Buy yourself a Mariners jersey on eBay

It's the off-season, which is not usually the time that people buy baseball jerseys. I am not most people. Many fans like to wait for the latest versions with the newest players, all to ensure that they buy a jersey of a player that's expected to be good or one that will at least be around for a while. You could do that, buy a Felix Hernandez jersey, and happily wear it without any worries for many years. You could also leap on a prospect and proudly wear the Mariners future first, and like me, possibly regret buying that Dustin Ackley jersey.

But waiting for April is boring, and you'll still have to pay full price, or get in on some lame MLB.com Black Friday sale where they give 10% off. Rule of thumb - if you call it a Black Friday sale, don't waste my time with anything under 20%. C'mon.

Why would you drop $100 on a replica or $268 on an authentic (wait what) when you could stroll your fingers over to the beautiful wasteland of sports memorabilia that is eBay. Now is the time to buy a jersey for next season, the time to get something awful, or maybe something wonderful and unique that will turn heads. Trust me, it is far more rewarding to walk around a Seahawks game with a Rufus Porter jersey than it is with a Russell Wilson one.

Some people don't like to wear jerseys. I don't ever wear mine outside of Safeco, but that's the one place where your purchase can be truly appreciated. Nobody is going to be impressed by your $268 authentic jersey (nobody knows you dropped an absurd amount of money but you), so get something cheap and unique. Let's observe some options for your 2014 wardrobe. 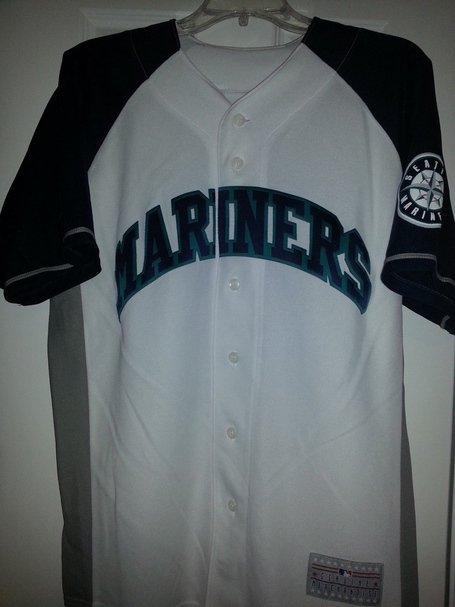 I don't even know where people buy stuff like this in the first place. Off-brand, off-font, an awful color block combination - these kind of jerseys are all over eBay, and you'll see them at Safeco all the time, usually on a nice old grandfather who probably doesn't know the difference. I am not a jersey snob, this makes me sad. You ever go to a Seahawk game and see people wearing the old jerseys you could buy at JC Penney that were missing half of the details on the sleeve and looked totally weird, but cost $20 less? Alright, so maybe I am a jersey snob.

Even worse, you're already wearing the jersey of a popular semi-recently departed player. Boring. This is like wearing a Shawn Alexander jersey to a Seahawks game. 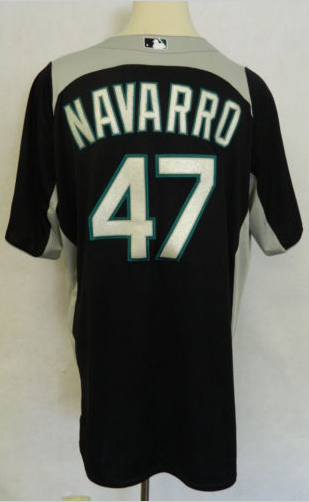 Here's your chance to own a game-issued jersey from a bullpen coach! It's authenticated, it's a size 52, and nobody will know what it is. You might spark some chatter if you hang out in the 'Pen for long enough, but your explanation will be either awesome or shitty depending on the other side of the conversation. I'd buy you a beer if you explained why you bought this, but I'm not most people. Here's the upside, it's game issued, which means this probably happened:

"no thanks I will wear mine from yesterday"

You've got two days left to put in a bid, and it'll only cost you $12 to get in the running. 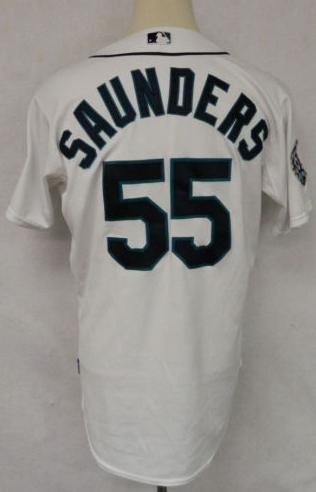 We're getting a little better now. It's kind of weird to wear a jersey that somebody else wore and think it's cool, but whatever. I have an autographed Dwight Howard game-worn All-Star Game jersey that I won at a silent auction, and when I wear it it goes down to my shins. That has nothing to do with anything, except that Michael Saunders is a reasonably sized person, so if you wear this it will fit, but nobody will know it was game worn unless you tell them, which will make you sound like a turd.

It's authenticated, and a $25 bid will get you in the game. This would look pretty cool in a frame in a den or something, but I didn't consider that possibility before I wrote this, so I'm going to unfairly punish this jersey. 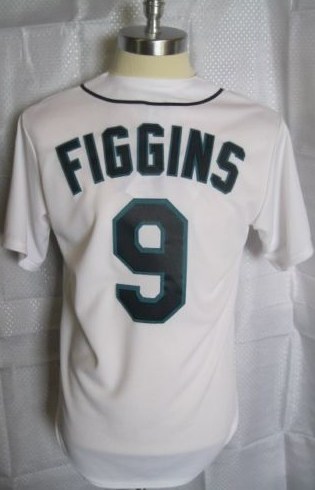 This person is offering up a Figgins jersey for the exact same price that he bought it for in 2010. He even calls it an "authentic replica," which means this seller is a misleading jerk. Plus, he's displaying it over a shower curtain, which means that even though this jersey is "new," it's been hanging out next to a toilet, which is where it belongs. Fuck this guy. 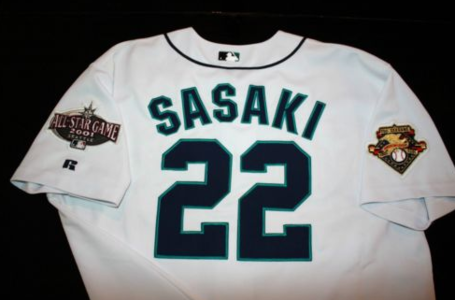 This is a great throwback jersey to the glory years, and who didn't love Kaz? This one has the All-Star game patch on it, comes from the best season in Mariners history, and it appears to be in good shape for just $30 - but wait, there's a disclaimer from the seller.

Suspect. When you look to the item details, the seller lists country of manufacture as "Korea, Democratic People's Republic Of", so you know this guy isn't messing around. Tons of pictures but there's a solid 70% chance this has a massive stain or smells like cigarettes. At least you know exactly where it was made. 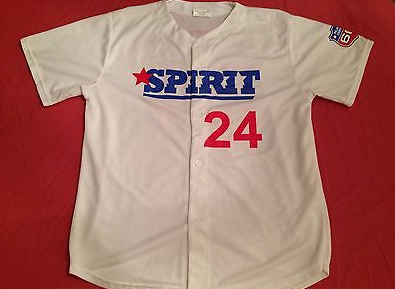 I'm somewhat against Griffey jerseys, only because they're so common. Everybody has one, and everyone still wears them to games. Griffey is a yawner, but this one is pretty damn cool. Griffey played for the Spirits for 58 games in 1988 while destroying the Cal League, and this guy is selling this replica for $25. I'd be tempted to buy this one myself if it wasn't an XL. It fits a beloved name but also meets my fantastically obscure criteria. It is probably a re-issue from a promotional night some time in the 90s, the conflicting 66ers sleeve logo kind of betrays it. Still very cool.

My search for the perfect jersey to buy this off-season was a failure, but there's surely some goodies that I missed. Somebody has a Greg Briley jersey lying around somewhere, and you're telling me nobody has a Kevin Mitchell jersey balled up in an attic somewhere? Don't be selfish - people want to wear those.

Got any great jerseys or amazing eBay finds? Post 'em below. Thanks to CapSea for the idea.