Mariners offseason rumors: let's all pause and think these through

There's going to be a lot of offseason rumors tied to the Mariners—possibly more than any other team. When you read one, try not to overreact before thinking it all the way through.

Share All sharing options for: Mariners offseason rumors: let's all pause and think these through

If there’s a fan base that is more beat down and carries a greater defeatist mentality than that of the Seattle Mariners, I’d like to see it. And, of course, it is with good reason considering how the past decade at the corner of Edgar Martinez Drive and Dave Niehaus Way has gone.

As a bit of an anecdote, I was recently granted permission as an administrator of the Lookout Landing Facebook page. Now, I receive notifications every time a post receives a like or a comment , or the page receives a message. When I go to check on the page, and the comments in particular, it isn’t pretty. Here’s an example, from the Matt Kemp/Nelson Cruz post last week: 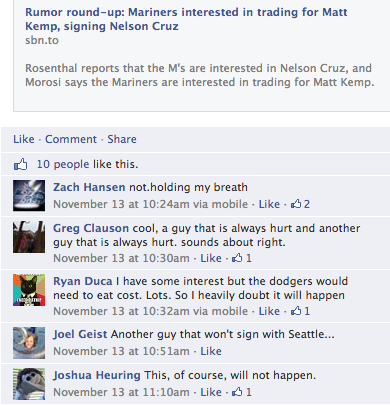 The thing is, these people aren’t wrong. When a reporter relays a transactional rumor during the baseball offseason, almost regardless of what it is, it’s considerably more likely it won’t come true than it will. That’s just the nature of this. There are more rumors than there are deals, for a number of reasons—a big one being that when a player is tied to team x, y and z, they can’t play for all three different teams.

Another reason, and this is a big one—is that they’re drastically overblown.

Now, they aren’t completely BS, there’s some level of truth to a large percentage of the rumors, and Scott made the big point on these in that Kemp post from early last week—that the Mariners, at this point in the offseason, are doing a lot of due diligence. They have a lot of holes and they’re checking in on the market for anyone who can swing a bat. Now, that simple act of checking in is one thing, how that action is relayed from one party to another—and then reported publicly—is a different matter. It applied on the Kemp rumor, and even more-so with the recent Olney bomb on the long shopping list the M's supposedly have.

With each of these rumors, there’s a sizable contingent of the Mariners’ fan base—or, hopefully, the vocal minority—who believe every single "the Mariners are showing interest in ______" or "The Mariners really want _____, _____ and _____" tweet is a PR play by the organization for sympathy. Basically, "the Mariners do this every single year. They say they’re in on everyone but then don’t sign them, just so they can say they tried."

And this just makes zero sense.

Let’s start by examining the basic structure of sports reporting, especially this form of offseason reporting on transactions. Things are, a vast majority of the time, reported for a reason—done so with permission. Jon Heyman, Jon Morosi and the rest of the gang aren’t piecing together shredded documents and using secret listening devices to drop in on conversations across the lobby of whatever hotel the GM meetings are in. They are told things, they are told a vast and amazing number of things that we wish we could be privy to—and then there's portion of this number of things they are granted permission to repeat publicly, and there's a reason they're granted permission to repeat these things and not others.

Now, before I go further, I want to state that I don't question the work of Olney, Heyman, Rosenthal or anyone else who might share news on the Mariners' offseason activities, it's just important to understand that not everything is as cut and dry as most fans believe. There's a reason these professionals operate at the highest level of their chosen profession. They work hard and they deliver credible news.

But part of working hard here is building rapport with sources. You don't get the big scoops later if you don't build the groundwork with your sources now, and in years past. It isn't that these guys are relaying information they know to be untrue—each of them are far above that—but don't take anything at face value.

I've stated this multiple times in the comment sections of previous posts, but if you do one thing when you hear a rumor this offseason, internally ask two questions: who would want something like this reported? And: why would they want this reported?

Let's go back to that big Olney tweet and run through it, just as a thought exercise. Again, for reference:

Let's start with the possible whos, and then run through the respective whys.

There are parts of this that may seem pretty far-fetched, and it's fair to say "well you could take just about any rumor and twist it into something it isn't"—but that's exactly my point. These rumors could mean anything, and we shouldn't freak out when someone says "the Mariners want better players" because of course they want better players.

I can't say it enough, Buster Olney and his colleagues at the highest ranks of baseball reporting do a great job and I can't thank them enough for making the offseason more bearable by sharing random notes like this over Twitter.

But as this offseason goes on, and the intensity and frequency of these rumors picks up, everyone needs to slow down. Think everything through and, most importantly, try not to completely lose your cool until something actually happens.