Is Justin Smoak a viable left-handed platoon option at first base, or do the Mariners need to make an upgrade?

Share All sharing options for: On Justin Smoak's platoon splits

Unless you haven't been paying any attention to this blog lately, you've probably noticed that we LL writers are less than enthused with the idea of Justin Smoak returning to start at first base in 2014. In the Lookout Landing Offseason Plan, we flipped him for Brian Matusz. In the Royals Review Winter Meetings Simulation, I dumped him for Cord Phelps. Believe me: I was dangling Smoak for that entire simulation, and that was the best offer I got. Cord Phelps.

Justin Smoak, it seems, doesn't have a lot of value right now. It's not hard to see why.

From start to finish, here are the moves that point the Seattle Mariners in the right direction for 2014 and beyond.

The Mariners, however, seem to be taking a line more optimistic than ours. Howard Lincoln called Smoak the Mariners' first baseman of the future. The only player-specific question Lloyd McClendon answered during his Twitter Q&A was about Smoak, whom he said has "tremendous talent" that just needs to be harnessed. Jack Zduriencik's recently tossed a few compliments Smoak's way, too. These signs all point in a certain direction.

Of course, we've also heard rumblings about the Mariners exploring platoons. Here's where things get interesting.

If you only look at his 2013 stats, Justin Smoak seems like a pretty promising left-handed platoon candidate. A 134 wRC+ is excellent, even for a first baseman - only five teams got better production out of 1B last year. Toss in good glovework and you've got a pretty intriguing player on your hands.

The only problem? That 134 wRC+ is almost certainly a mirage.

I'm going to start the case against Smoak as a platooner with the simplest and most obvious rebuttal: Smoak's career splits. Because of the larger sample size, we should be naturally inclined to trust these where they differ from his 2013 splits. They are as shown below:

OK, so based on these, it seems like Justin Smoak could be half of a platoon... a really terrible one, that is. No one wants a 101 wRC+ out of the long side of their first base jobshare. Looking at Smoak's career splits alone, it seems he's just plain old not good enough to merit starting at first base. Ever.

The most common counter-rebuttal I see to the "career splits" argument is the "revised swing" argument. The story goes something like this: last August, Smoak changed his swing. Since his swing is different now, we should throw out all of the old data, because it's not representative of what he can do with his new mechanics!

For one thing, this is pretty silly. As a general rule, swing changes just aren't all that significant. Michael Saunders' swing change gave him opposite field power, but it didn't make him a fundamentally different hitter. And that's an example of a swing change working. A lot of the time, they don't work. A lot of the time, a hitter changes his swing, and then afterwards he's still Dustin Ackley.

But you know what? I'll indulge this argument. Let's look at only 2013.

Pretty easy to see where the improvement is, right? It's in his ISO and his BABIP.

Let's start with the ISO. Last year, Justin Smoak showed more power from the left side than he'd ever shown before. Flipping through the rest of the numbers, it's obvious where that ISO boost came from: his HR/FB.

17.8% is a crazy number. If left-handed Justin Smoak were on the Fangraphs leaderboards for 2013 HR/FB, he'd be right below David Ortiz and right above Jose Bautista. HR/FB rates like that don't come along every day, and usually they mean a hitter is either a) ridiculously strong or b) ridiculously lucky.

So which was Smoak?

To answer that question, we need to take a trip over to Jeff Zimmerman's baseballheatmaps.com batted ball distance leaderboards. Taking a look at the 2013 home run and fly ball distance charts, which conveniently split the results for switch-hitters by handedness, we find left-handed Smoak... 85th. With an average distance of 288.13 feet.

I've demonstrated before that batted ball distance and ISO correlate remarkably well - even better, actually, if you remove line drives from the equation, since they add noise by rolling farther than they land and/or getting caught by infielders. About 57% of ISO can be explained by home run and fly ball distance. And lefty Smoak isn't doing all that well on the distance front. A best fit line based on 2013 data dictates that lefty Smoak's ISO should've been about .177, not .218. Not coincidentally, the 85th best ISO in 2013 (min. 300 PA) was .177.

Based on the distance numbers, Smoak's 2013 ISO looks like a serious fluke. In fact, we should expect him to do even worse than the distance leaderboards suggest, because the other big component of ISO is speed, and Justin Smoak is really goddamn slow. Throw in the fact that he's now officially past the peak of the power aging curve, and it starts to look like .177 is a pretty optimistic projection for his 2014 lefty ISO. He's almost certainly not going to repeat 2013.

OK, now for the BABIP. I'd like to take an opportunity right here to clear up a common misconception about BABIP. The "right" BABIP for any given hitter is not .300. BABIP is, in fact, a skill - it depends a lot on how fast a hitter is, how hard he hits the ball, and how high he hits the ball. It has a lot of noise over small sample sizes, but it stabilizes after around 800 balls in play. Smoak is well past that threshold, and his career BABIP is .262. That's not unlucky. It's unskilly. Smoak is really slow, and he hits the ball in the air a lot. If we want to project his BABIP going forwards, we should regress his .298 2013 figure down a lot. His true talent is almost certainly closer to .262 than it is to .298.

Conveniently, I just described Nick Swisher's 2013 season, in which he posted a 116 wRC+. Actually, that's a pretty generous comp: Swisher strikes out less than Smoak, and Smoak's BABIP going forward should probably be more like .270 than .290. Basically, even the most optimistic projections and comparisons peg Smoak as the lefty half of a league average first base platoon. And that's just not good enough - especially considering how many superior alternatives are out there for cheap.

A glimpse inside the Seattle Mariners' analytics department 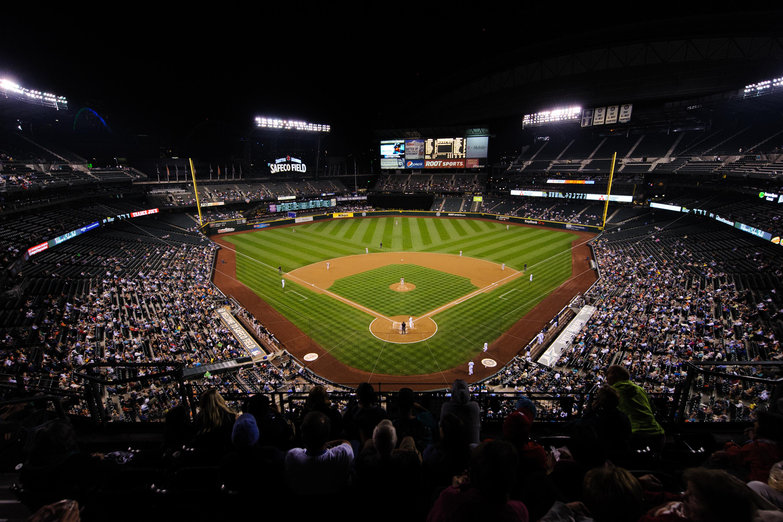 Colin O'Keefe had the opportunity to sit down with one of the Seattle Mariners' baseball operations analysts. He shared with us what his department does, and its role within the organization.

Well, maybe there's one reason. There's one remaining counterargument against Smoak's career splits, and this one I actually kind of buy. The Mariners, as we know, have an analytics department. They have several people who are paid to comb through baseball statistics. Those people have access to HitF/X data. Presumably they've done a HitF/X analysis of Justin Smoak. If that analysis tells them that both the BABIP uptick and the ISO spike are legitimate - not just one, but both - then there's a case to be made that Smoak is a good enough platoon candidate. So if the Mariners do decide to go into 2014 with Smoak starting at first base, I won't be terribly upset, because it probably means that data I don't have says "this guy is for real".

But still. I wouldn't go buying Justin Smoak jerseys, or drafting him in fantasy leagues, on the premise that he'll be an effective platoon 1B next year. From where I'm standing, it looks like he's just not good enough to be a major league first baseman.

From either side of the plate.