Just how do these random players get linked to the Mariners?

It's the offseason and you know what that means, especially if you've been reading this site the past week. Rumors, rumors, and rumors. You also know that each rumor usually comes with a grain of salt and a reactionary minute of self-assurances designed to inoculate one's self from the craziness that is the month of November. Something along the lines of...

You: *reads news linking Mariners to someone like Delmon Young*

You: OH GOD NO

You: No this can't be

You: Ohhh, wait, think about it. Everyone knows the M's need "corner bats," and this must be someone just going through the list and tweeting their random guesses. Think about last offseason, it was the same thing. Clearly worrying about this is a fool's errand, unworthy of attention, and quite frankly, a waste of time. This Delmon Young-like player is never going to be on the Mariners, and it's just another example of news-hungry reporters in the slowest part of the offseason.

You: *reads news linking Mariners to someone like Joe Blanton*

It just repeats. So we all know that a lot of rumors have been circling that are most likely, bogus. Like Scott mentioned earlier in the post about Jhonny Peralta--which is pretty ridiculous if you think about it--a lot of these reports can't be trusted, especially with how notoriously tight-lipped this M's front office is.

But at the same time, it's been pretty interesting to go back to some of last season's rumors from around this same time, to see how they turned out. Hidden next to every Carlos Beltran rumor are some of these:

The Mariners have expressed interest in Washington native Jeremy Bonderman, who has an offer from the Tigers in hand.

Welp, sounded incredibly stupid at the time (and woah, he had an offer from the Tigers in hand?!?!) but it unfortunately didn't make it any less true.

And how about this quote from Yahoo!'s Jeff Passan, which I found on one of Jeff Sullivan's posts from last November linking the M's to Wil Meyers?

In their search for a top-of-the-rotation starter, the Royals have dangled outfielder Wil Myers, the consensus 2012 minor league player of the year, two sources told Yahoo! Sports.
[...]
In addition to the Rays, sources said the Royals have discussed deals with Arizona, Seattle and Oakland, all teams with a plethora of young starters in or near the major leagues.

And then, this morning, on twitter from Ken Rosenthal (h/t @colinokeefe, @randallball) 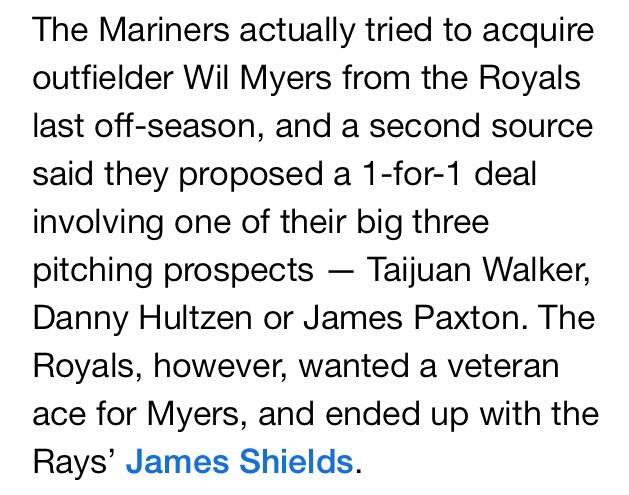 So yeah. A lot of these rumors are totally garbage. A lot of them might actually be from a good source. Olney and Rosenthal usually are, as we can see from these two, but the truth of the matter is that we just don't know--and many of the sources putting things out right now just don't know either. November is pretty early yet, and since teams aren't dealing the way they will in January, and since the winter meetings haven't happened yet, somebody's gotta talk about something. So that's where this handy little tool comes in: Mariners offseason Mad Libs trade rumor generator.

It's pretty easy. What we are going to do is first post the template article, which is pre-written before the M's are again linked to Jacoby Ellsbury or when someone suggests signing Chone Figgins to a 4-year $40 million contract. Just plug those names and numbers in, and the rumor has flight. Let's try it:

Headline (Order is up for grabs, but generally we are looking for at least two nouns and a verb. Mariners sign Jacoby Ellsbury, Mariners trade Erasmo Ramirez, Yoervis Medina to Angels for OF Peter Bourjos, etc)

According to (noun), the Mariners (verb) (nouns) this morning, in what is looking to amount to a(n) (adjective) offseason for a club that finished 2013 with their fourth consecutive losing season, seemingly growing more and more desperate for (nouns) as the offseason progresses.

There has been no official word from (name), but for a club looking to (phrase), they seem ready to (verb) (nouns).

Alright, let's get to cracking. First, a rumor from yesterday, courtesy of Fox Sports' Jon Morosi:

According to Fox Sports' Jon Morosi, the Mariners have shown interest in Rockies Centerfielder Dexter Fowler this morning, in what is looking to amount to a busy offseason for a club that finished 2013 with their fourth consecutive losing season, seemingly growing more and more desperate for outfield bats as the offseason progresses.

There has been no official word from M's GM Jack Zduriencik, but for a club looking to win soon, they seem ready to move some pieces.

See? Damn, this is easy. Lets try another one, this one back into the realm of absurdity. We know the M's have been looking for bats since, well, like 2002. But how about attaching their name to a popular free agent pitcher whose signing is probably, definitely not on the table? ON TO THE MAD LIB MACHINE.

According to Yahoo!'s Tim Brown, the Mariners are looking at Free Agent closer Brian Wilson this morning, in what is looking to amount to a tumultuous offseason for a club that finished 2013 with their fourth consecutive losing season, seemingly growing more and more desperate for consistency as the offseason progresses.

There has been no official word from Wilson's camp, but for a club looking to revamp a good part of their roster, they seem ready to spend big.

This shit just writes itself. Sounds just as convincing when you know that they are just plugging words into a template. See? So next time you get scared about a crazy rumor on twitter, relax. It's probably nothing. Carlos Beltran isn't going to be a Mariner in 2014.

But just remember that sometimes those rumors actually come from a legitimate source, and even though they are stuck swimming in a deep end of pool filled with jokes, they aren't necessarily any less accurate. It's tough to weed the good from the bad--and it has to be tough to be a reporter constantly under fire from rumors left and right and being told to report on them, even if you aren't sure they are true or not. But just because you read it on the internet doesn't mean its true. If it becomes true later on, though? Well then, I guess all I can say is I told you so.