I'm tired of having no Mariners baseball. So like a dog to his own...you know...back to the archives!

I've really been enjoying the World Series. I have. The obstruction call, the pick off, Uehara and even the beards. No, wait, not the beards. I'm tired of the beards.

But as much as I do love baseball, I have to admit that spending 7 months out of the year watching a team like the Mariners try and scrounge up enough highlights to fill a five minute video isn't exactly the same as watching two of the best teams in the game string together a laundry list of hits in one game, followed by a near hitless outing in the next. It's not the same. Even talking about front office moves, trades and whatever the hell Chuck Armstrong did to piss everyone off this time...I want baseball back. Mariners baseball.

So I logged on to MLB.com's video archive to get myself a quick M's fix, and my, did it feel nice. Only the happy moments. This is the magic of video editing. Maybe I'll watch all my baseball like this now! Take a look at their very selectively edited Top Moments of the 2013 Season:

If these killer tunes aren't enough to get me pumped up, these jaw-dropping, eye-popping plays will. Is it really almost 2014? It feels like these were only yesterday. Alright, let's take a trip down memory lane:

Alright, fine. It may be because these are in consecutive order, but starting off with a successful diving catch by an uninjured Franklin Gutierrez just seems like a pretty rude way to open this whole thing. The M's have a $7.5 million option on Guti and...well, let's be honest. He isn't coming back, at least for that much money. But damn, I miss this. Also the part where he gets up. Maybe that's actually the highlight here. Hm.

Well, of course we get right to Raul. Remember this game? It might just be my selective memory, but I feel this is right about the time Raul started to test the Gods and for at least this series against the Yankees, it seemed like the Mariners were actually on the right track for the first time in a while. I'm trying to remember what happened after this series. The Mariners were playing well, Raul was on fire, .500 was in sight, and OH GOD NO 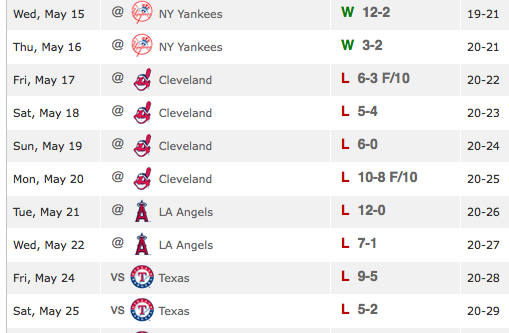 3. May 26th- Raul Ibanez and Jason Bay's extra-innings home runs against the Rangers.

This game came right after the incredibly depressing above graphic, giving the Mariners their first win in 8 games, and in extras no less. I feel like extra-innings were A Thing this season, and while it's always exhilarating to come out of a multi-hour drudgery on top...it doesn't mean all that much more than a normal two-hour win in the long run.

My favorite part about this clip is Dave Sims. I know he's referring to the end of the 8 game losing streak, but listen to the way he says "It's over! It's FINALLY OVER!" In a way, Dave, you're right. In another, perhaps more accurate way though, you're not.

Remember when we were as excited about Nick Franklin as we are about Brad Miller? I miss those days. I was at Franklin's first game, that bizarre Memorial day camo uniform game where Aaron Harang threw a complete game shutout at Safeco only three days before this. I drove up with a couple of my friends who aren't necessarily baseball fans, but they enjoy maybe a game or two once a season. There was all this chatter because Ackley had been sent down, and I tried to explain this to them but was only met with nodding heads and questions about the nearest beer cart.

Then, in like the eighth inning, I saw the now-familiar blue bulbous mushroom hat emerging from the M's dugout to pinch hit. You guys! Holy shit! They didn't care. Whatever. I knew that this wasn't anything like watching Bryce Harper's first at-bat or anything, but I felt excited to be there to witness it regardless, especially having driven up from Portland--I don't quite have the ability to hop over to the park when the M's call someone up on a day's notice. I have to rely on luck, and I lucked out here.

I moved closer to the edge of my seat and tried to explain what was going on, turning my head after the first pitch, blabbering like I usually do and moving my hands too much. But after I realized I was missing something exciting to tell my friend something he didn't even want to hear, I realized Franklin was trotting down the first base line with a walk. Now walks are great. I'm not taking anything away from that. I want the Mariners to walk. But this moment wasn't about strategy, it was about theater. No blooper single to a roaring crowd, no surreal first-pitch home run, not even a second of excitement before a put-out, shelving the hope for a first hit until next time. No. A walk. The level of expectation that met the reality of that at bat felt quite a bit like the rest of Franklin's 2013 season.

At least he gave us this moment. Poor kid. 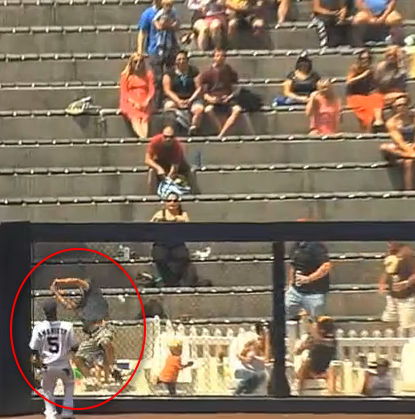 This is it. This is the highlight. Remember how stupid, how unexpected, how almost obnoxious this was? The Mariners were in yet another awful extra innings match, and thanks to the bullpen, the White Sox tacked on 4 runs in the top of the 14th, putting this game on the ice and sending whoever was left at Safeco home for the day. So seriously, when Kyle Seager somehow comes up with two outs and the bases loaded...and TIES THE GAME, the 48 people sitting in the outfield--and I don't think that's an exaggeration--understandably lose it just as much as I did in my living room. Including this guy, who almost killed a four year old son. Yes. Little Joey learned an important lesson this day. 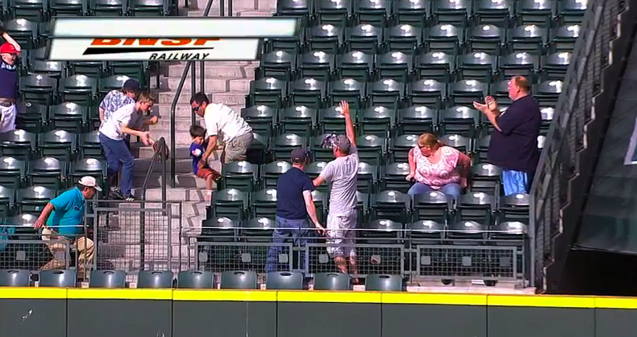 These are the scenes baseball was designed for. Random, almost absurd moments of rapture, beautiful and transcendent. A promise that every day could impart a lasting memory to carry with us for the rest of our lives like a scar--an experience tattooed upon our skin. This was one of those moments. Except then, a few minutes later, the Mariners fucking lost and ruined the whole thing.

Now we really are just getting cruel. Too many moments of the Mariners 2013 season were predicated not on exciting happenings stemming from the result of a winning ballclub, but rather highlights like 42 year old men hitting home runs. Which, I mean, whatever. The Mariners had a rough season, we get it. In the midst of a season that on paper gave us nothing to watch for, the M's reached deep into their pockets and found a few gems. Here's to hoping they keep this up when they are winning. Except without Henry Blanco, this time.

I don't really have anything to say about this so here's the game chart. 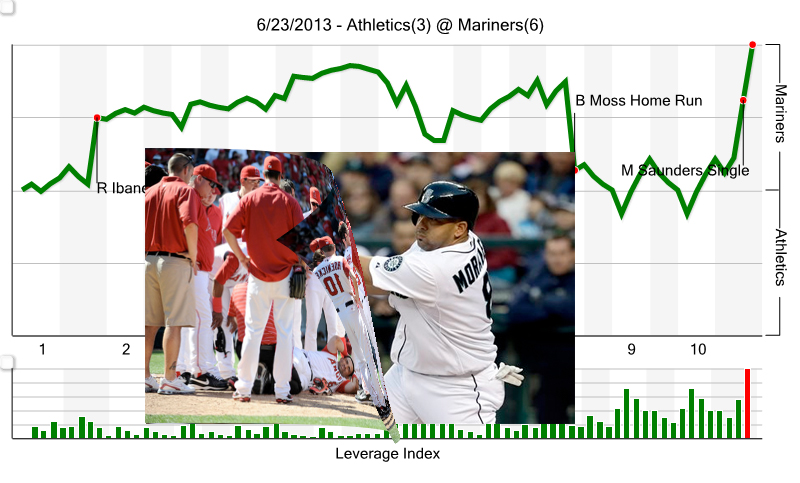 Oh Mike Zunino. He may have a ways to go, he may need more work. But he certainly has his moments.

That's all fine and dandy, and I know that the cubs were in town so my point may be moot, but holy shit look at this picture of Safeco: 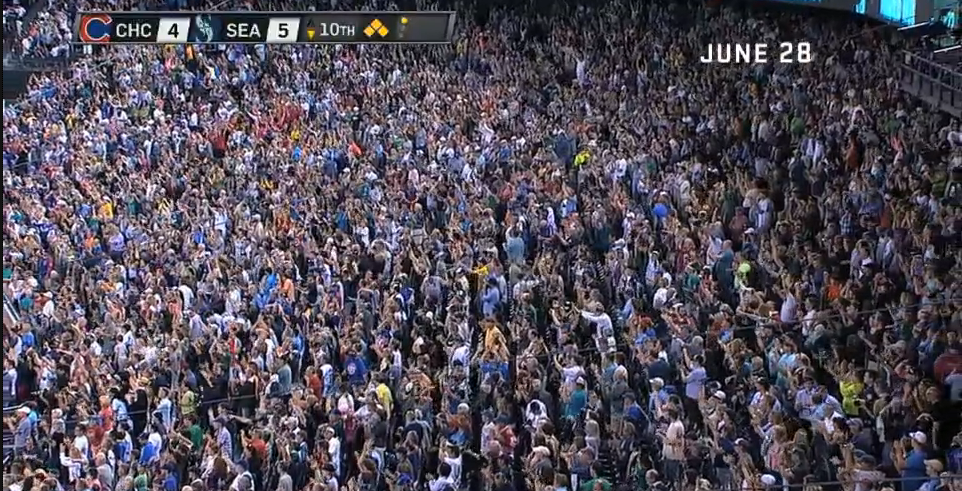 The last time I was at a game this packed was during that weekend last year where the Mariners traded Ichiro to the Yankees on the first day they came to town. Perhaps people were afraid it was the last time they would see Ichiro play baseball in person, perhaps it was just a nice summer day. Perhaps all these people in the picture are just Cubs fans, but perhaps..perhaps Safeco could look something like this in a few Octobers. Just a thought. Oh yeah, uh Mike Zunino! Yeah!

Seager doing what he does best: beating the Rangers.

Really? This over Taijuan? James Paxton? Brad Miller's upper-deck home run in Houston? I don't know. And listen to Dave Sims. He's so over this season at this point, and he knows he has an entire month of this left.

Listen to the pauses. This is a man who's so over it he can't take it anymore. And I can't blame him a single bit. I like Dave Sims. But poor, poor man.

I'm not being pessimistic here. September was rough. It's pretty amazing how quickly I feel I've personally moved from the late season malaise of routine baseball into waiting, and then straight to it wanting it back the way it was when I didn't care. That's just what baseball does, I think. Someday I'll learn how to take things as they are and not for granted like September baseball can be.

What do you all think? What great moments were left off this list? I'm not talking a season review or anything--we already kind of did that here. I want hope. I want memories. I want good, old fashioned context-free Mariners 2013 baseball stories. Give me your best shot in the comments below.