Remember when Michael Morse, hailed as the Mariners' offensive savior, started the season hot - and then immediately got hurt? Remember when he tried to tough it out - and then sucked? Turns out he was even more badly injured than we thought!

Share All sharing options for: Michael Morse has wrist surgery

Below, please find a graphical representation of Michael Morse's 2013 season. 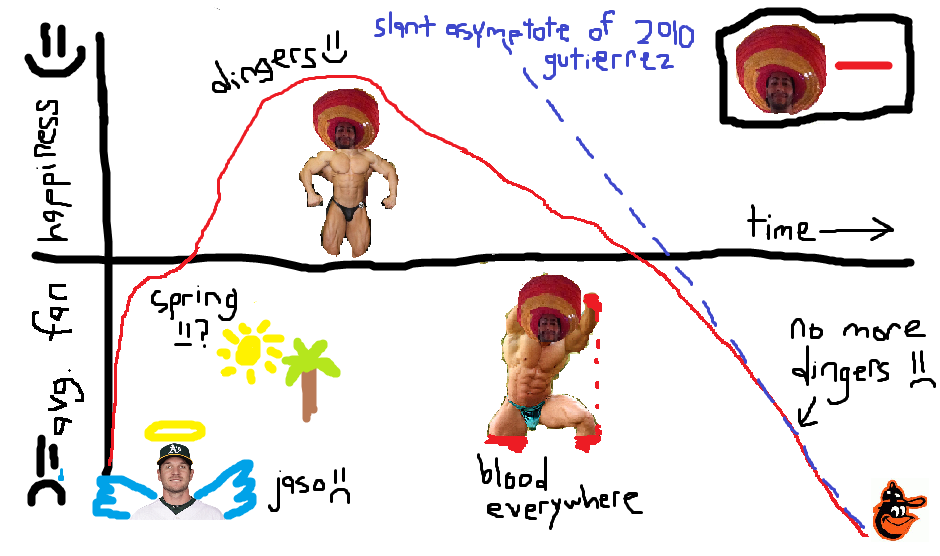 The latest, from the Baltimore Sun's Dan Connolly: five days ago, Michael Morse underwent scheduled surgery to remove a bone outgrowth in his left wrist. Doctors who evaluated the injury believe that it was caused by a traumatic event sometime in May and impeded Morse's swing mechanics for the rest of the season, likely sapping much of his power.

For what it's worth (not necessarily a whole lot), Morse's month-by-month splits support the doctors' theory.

Keeping in mind that we're dealing with samples of less than 200 PA here, the ISO difference is pretty striking. Had Morse maintained his April-May ISO over the whole season, his nearest neighbors on the power leaderboards would've been Jay Bruce and Jayson Werth. By contrast, the players whose full-season ISOs best matched Morse's June-September numbers were Yunel Escobar and Starlin Castro. That's a big difference, especially for a player whose one plus skill is power.

The instinctive reaction to this news - the easy reaction - is "that's so Mariners". Of course the team's big offensive add of the winter would look good for 200 PA and then develop a mysterious power-sapping wrist growth. Of course he'd raise our collective hope as fans, only to take a nosedive off the Cliffs of Disabledlistitude. What else did we think was going to happen? Mariners!

The thing is, though: this wasn't bad luck. This wasn't unpredictable. Michael Morse has cracked 500 PA once in his entire career. He's produced more than 0.5 WAR in a season once in his entire career. Quite simply, the guy just can't stay on the field for an entire season. For all of the hullabaloo that Geoff Baker raised about Morse being "a legitimate full-time mid-order presence" (as opposed to John Jaso, who was a "part time player"), Morse wasn't ever much more of a full-timer than Jaso was. He was just a different kind of part-timer - the kind that spent his time off on the DL instead of on the bench.

Basically, swapping Jaso for Morse in any given year would net you 87 extra plate appearances and a slightly higher wRC+. To do that, the Mariners gave up two years of team control, several million dollars, and the ability to put their part-time player behind the plate instead of out in left field. It was a pretty bad idea.

I'm sorry. I don't mean to harp on the Jaso-Morse thing. The process was bad, the results were bad, and the hundreds of pages written about it have been bad. I promise this is the last time I'm going to discuss it. But there's one last important lesson we can glean from Michael Morse, and from Franklin Gutierrez, and from Erik Bedard: it's foolish to trust that players with long injury histories will stay on the field for a whole season just because they seem healthy now.

So when the Mariners sign Jacoby Ellsbury, or trade for Carlos Quentin, or hand a rotation spot to Erasmo Ramirez, don't go penciling those players in for full seasons of peak production. It's not going to happen. Instead, remember the lesson of Michael Morse, and hope that the Mariners have a backup waiting in the wings.

A backup, that is, who's better than Endy Chavez.