Jack Zduriencik and the Mariners brass should keep all options on the table. That includes the following potential player-managers.

There have been 221 player-managers throughout the history of Major League Baseball, and while we've all heard and not-laughed at the Raul Ibanez joke you are all thinking about now, the practice is actually not quite as old as everyone imagines it to be. When I hear player-manager, I think Connie Mack and Cap Anson. Sepia tinted photos and baggy wool uniforms without numbers.

But the idea has been seriously debated as recently as 2011, when the White Sox thought about giving their skipper job to first baseman Paul Konerko before ultimately deciding on Robin Ventura. Konerko was only 35 at the time, definitely entering his graying years on the diamond, but pretty far from the old man river jokes that orbit Raul Ibanez like debris near a dying sun. And before signing with the Indians, Jason Giambi interviewed for the Colorado Rockies' open position, although they were asking he hang up his batting helmet first. Still, he fits the model well. Even though Pete Rose was the last in 1986, I wonder if he will be the last, ever.

Not if the Mariners have anything to say. Come on, Jack, what else do you have to lose? It's not like anything else has been working. Here: I'll even do all the work for you. Just pick up the phone and dial away. 118 wins are on the horizon, friends.

Just getting it out of the way, as it solves both the assured debate on what to do with Raul Ibanez (seriously, you know they are actually debating this), and it lines up well with the final year on Z's contract. And even though the TNT's John McGrath wrote up a serious and detailed column on the idea, Raul probably doesn't want to manage. But he still wants to play. Check out this quote, from an interview he did with Shannon Drayer toward the end of the season:

"Physically, I feel like I can play for, kind of until I want to. Mentally, it is a mental grind. The mental part becomes harder as you get older and staying locked in for six months in a row gets harder..."

Yes. This man should be the Mariners next manager. Not only does this work in the exact opposite way I thought aging works, but it sounds like the exact sentiment from the kind of candidate I expect ownership to chase after.

The last player-manager who was a pitcher was the Detroit Tigers' Fred Hutchinson, who pitched and managed from 1952-1953 before retiring and coming to Seattle to manage the Rainiers. You know what that means. Jamie Moyer. Just look at this veteran grit, as he talks about trying to fit in with 17 year old kids at the ripe age of 49 during last year's spring training:

Not only is he fearless against the face of all reason and common sense, he knows his baseball. He's faced 8.9 percent of all the hitters that have ever hit in Major League Baseball. Yeah. How about that? The only problem is that you'd lose every fifth game, as there would be no one on the field to tell him he can't pitch when his arm detaches from his torso in the seventh inning. That's veteran grit.

Truth be told, I'm sold on this one. Screw tenure, screw experience. Sign him again, let him catch once a week, and that goofy smile can carry the M's to maybe 50 wins or so. Even better--he will never write himself into a lineup card and then whenever the bases are loaded--bam. Grand slam every time--because here's the thing about Henry Blanco:

You know it's true. Deep beneath the aging flesh covered in outdated tribal tattoos lies a darkness that betrays that toothy grin we have become accustomed to. You know it. You see it. There is a reason Henry Blanco never lasts long in one place. You don't want to fuck with Henry Blanco. And that's exactly the kind of person I want running this ballclub. Mr. Blanco. Mr. White. Mr. Walter Henry White.

Fuck it. Why the hell not? Billy Beane was joking about adding Rickey Henderson to the A's roster for one game in 2007 and they wrote a book about that guy, so you know he must be on to something. He's currently a "special instructor" for the Athletics or something silly and unofficial like that, and they'd have to take him back out of the Hall of Fame. But screw 1995, let's just go back to any and all good Mariners memories. 2000? Sure, why not. Sell those tickets.

Look, the Mariners defense has been sliding down a deep hill ever since Jack decided that baseball is an either/or game and signed Michael Morse and Kendrys Morales. Omar Vizquel has 11 gold gloves, and as long as Raul Ibanez can let him into that sci-fi rejuvenation tank thing he used to hit 29 home runs this year, we got ourselves a new baseball magnet, folks. He "retired" last year, but have you seen this guy? He can probably fit into the same exact uniform he wore for the Mariners in 1993. 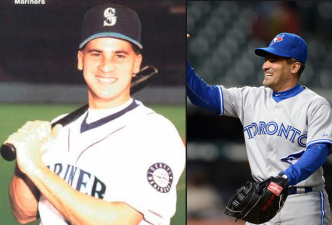 Remember Eric Wedge and the whole Dustin Ackley sabermetrics thing? I don't think that was the result of a reasoned, thoughtful debate. It was a poor, tired man--nervous, desperate for wins, lost as to why his once prized prospect was striking out all the time. Think of Wakamatsu's bunts. Think about the over-thought pitching changes. Obsession over splits. Poor Robby Thompson signaling the wrong bullpen arm. Minds torn asunder.

Let's think about what we just saw. Brendan Ryan, on the field. Head so in the game he doesn't even realize that wait, Brendan you're talking to a buffalo, buffalos can't talk.

Tom Wilhelmsen, a bit goofy as he usually is. Not keeping himself busy or anything, but what else to relief pitchers have to do in the middle of games? He's devised a scheme to get cookies for after the game and you know what kind of cookies Tom Wilhelmsen is probably eating.

But Jesus Montero? Oh, you know, he's just walking around and eating a plate of sugary, fatty dessert treats in the middle of a baseball game. Okay, one. This was spring training, buddy, and I'm pretty sure that you were already on the hot seat with only Kelly Shoppach there to take time from your defensive duties. And two: cookies? For the slowest runner in baseball?

Don't you see? This is genius. The Mariners can get a return on their investment once his PED suspension is up by having him sit on the bench, maybe take a little BP and hit a dinger once a week. Likewise, they can save a shit-ton of money that would be going to someone like Lou Pinella or Joey Cora and finish out the rest of Montero's contract that will otherwise be sitting in AAA. In my mind, you could walk up to Jesus Montero, tell him with a blank face "Hey. You're the new manager," and he would shake his head to say "Oh, okay. Cool," and then go do whatever it is he is told Managers are supposed to do. That's literally all that would happen.

Montero would think he is running the club, but the grizzled veteran leadership that Z likes so much will actually be the ones in charge. Meanwhile, the M's save money to spend on someone like Ellsbury and Montero brushes up his hitting and gets the whole manager thing pinned to his resume, making his trade value skyrocket when hes arbitration eligible in 2015.

What's the worst that could happen? Montero could feel like he's included on a club that seems to have all but given up on him considering they just tried to throw a bunch of money on what they hope he can one day become.

Its a foolproof plan, people. Just remember where you heard it first.