Share All sharing options for: The Mariners' top ten longest home runs of 2013

Much has been made of the "dingers!" narrative. The 2013 Mariners, as we've all been told, sacrificed defense, getting on base, general health and a son or daughter each in the name of home runs.

Personally, I believe Jack & Co. knew the team wasn't ready and built a high-volatility roster with an outside chance at being decent. But, that's neither here nor there—we know we were left with, and we know what we're here for.

One of the first things you'll notice with this list is that the Mariners' future is not well-represented. Just two players under contract and expected to contribute in 2014, Kyle Seager and Mike Zunino, make the top ten. But, good thing that doesn't matter at all.

All the links go to videos, so check those out. And these are compiled using ESPN's Home Run Tracker— measured by their "True Distance." That's defined as:

10. Mike Zunino, 423 feet.
There were actually three tied at 423 feet. One was a blast from Seager that didn't look quite as impressive as this one and then there was a Raul Ibanez dinger also of the same length. If you're looking for a more technical tiebreaker, this one was hit the hardest, coming off the bat at 109.1 mph. It was the Mariners' sixth hardest hit home run of 2013. Also, it's off Adam Wainwright.

9. Kendrys Morales, 429 feet.
This is the first of Morales' three entries in this top ten. And, it's from the horrible Indians series that set the tone for the rest of the season. Remember the game before this series, when Wilhelmsen came into a one-run game and stranded a runner at third—giving the Mariners a series win in The Bronx over the then-good Yankkes? Good times.

8. Michael Morse, 429 feet.
And hey, here's that series—actually the exact game I'm referring to. This is one of my two favorites on the list. It's in the top-15 lowest Mariners' home runs of the season but is the second hardest dinger the Mariners had all year, leaving the bat at 112 mph. Shawn Kelley thought it was going to kill him.

7. Kendrys Morales, 431 feet.
This is probably the most average looking home run of the bunch. Home Run Tracker calls it a "Plenty" home run, which is true, but as it's into the power alley it isn't the most visually-appealing dinger. Kendrys Morales still seemed to enjoy giving it a look though.

6. Kyle Seager, 431 feet.
If you don't count the tie mentioned up above, this is Seager's only appearance on this list. He hits a no-doubter off Bruce Chen. Seager hit this right where he hits what looks to be about 70 percent of his home runs.

5. Carlos Peguero, 440 feet.
Without question, it's the best home run on this list. It is Carlos Peguero in concentrate form. This ball is headed for the dirt and Carlos puts it halfway up the batters' eye. He doesn't even get a full, normal follow through either as he's taking one hand off the bat as he makes contact.

4. Jesus Montero, 441 feet.
Remember this guy? Montero can do one thing well, and that's hitting a ball far if he catches it flush. That's it, and there's a reasonable chance none of that ability was real. In creating this gif and watching the highlight video, I fantasized briefly about Jesus Montero contributing in 2014 and contributing to the level we hoped he would. But, I mean, come on.

3. Michael Morse, 441 feet.
It's the second of three Michael Morse appearances in the top ten, and the last second-to-last home run he hit as a Mariner. He hit another one, for the M's, on August 21st. That kind of blows my mind. Also, this is the only home run Morse would hit in Baltimore—he didn't homer at all after being traded.

2. Kendrys Morales, 443 feet.
Following up on #4 on this list, Morales and Montero effectively Lidge'd the Astros in back-to-back games. This ball would've landed on the tracks if not for those advertisements. What good are these anyway? They're hideous and, for the marketers, what advantage is there to being on some monstrous sponsor quilt.

1. Michael Morse, 446 feet.
For a short time, it seemed like it all might work. This home run came in the Mariners' second game of the season, off Grant Balfour, in the ninth inning of a 7-1 beatdown of the 2012 AL West Champion Oakland Athletics. It was Morse's second of the game, following a three-run blast in the third inning. In the game before, Opening Day, Felix and the bullpen shut down the A's 2-0. Then, again, the 7-1 beatdown. And the next day, Guti led off the game with a home run and Morse followed two batters later with his third of the season. I was thinking playoffs and, if you weren't—how is any of this still fun to you?

But, on this home run, neither the gif nor the accompanying video do it justice—as neither show where the ball hit on wall. I was there for this and the rest of the Morse-powered opening series, and yeah, this ball was juiced—hitting a good 30 feet up the base of "Mount Davis."

.
I don't know how many times I watched this before Miller's call-up, but it was easily more than 50. Probably closer to 100. There's the swing—how could anyone not love the swing? And then, the power. He puts this almost halfway up the light stand.

For scale, here's where Miller puts that ball: 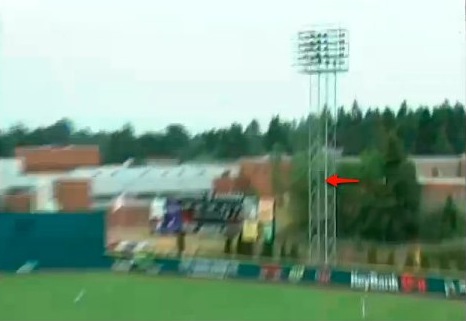 For one more optimistic note on the future, the Mariners' hardest-hit home run didn't make this list (again, ranked on distance). No, that was hit by Justin "not enough power to be a power hitter" Smoak. Though the dinger only had a True Distance of 422 feet (one foot short of making this list), it left the bat at 113 mph.