A whole bunch of national baseball writers, including Ken Rosenthal and Dave Cameron, seem to think that the Mariners are going to sign Jacoby Ellsbury. What's the right price for the Boston center fielder?

Share All sharing options for: Devising a fair contract for Jacoby Ellsbury

For some reason, we as sabermetrically inclined baseball fans have brainwashed ourselves into basing our feelings about free agent signings entirely on the dollar value and length of the contracts involved. It's not necessarily a wrongheaded way to think - whether or not the team is getting good value out of a contract is important - but it is a little bit weird that one or two million dollars of average annual value can totally swing our perception of a deal for a player like, say, Kendrys Morales. For one thing, what would the team even do with that extra cash? In the grand scheme of baseball, $1,000,000 doesn't really matter all that much. For another thing, it's not our money. You'd think we'd be principally concerned with acquiring good players and less concerned about whether or not the acquisitions are "efficient". Then again, you'd think we'd find something better to do with our time than watch Mariners baseball, so, hey. We're dumb.

But the silly, stat-headed, efficiency-concerned part of me really wants to know: is it too much?

This is a really complicated question. If we frame it as a $/win conversion - which we're going to do, because here on Lookout Landing we like stats - we can split it into three parts.

1) How many wins would the Mariners add per year by signing Ellsbury to be their new center fielder?

2) How much would those wins be worth, in dollars?

3) Is it worth it for the Mariners to pay extra just to be able to sign a good free agent, given how much they suck?

Answering the first part is impossible, because we don't have the ability to predict the future. Impossible, however, won't stop us! We can take a crack at it with the use of some methodology I've been employing since my very first analytic articles at Lookout Landing: CT%/SW%/ISO comps!

The idea behind this methodology is that the three core skills of a hitter are swing rate, contact rate, and power. These statistics can be represented by SW%, CT%, and ISO respectively. Therefore, players with similar "three core skills" should have similar performance and production. In this case, I also added two bonus skills: baserunning and defense, which comprise a large chunk of Ellsbury's value and thus really can't be ignored.

For his career, Jacoby Ellsbury has a 43.8% swing rate (higher recently), a 87.9% contact rate (similar recently), and a .141 ISO (lower recently). He also has huge positive baserunning and defense values. This means that we're looking for players with swing rates between 42% and 48%, contact rates between 86% and 92%, and ISOs between .100 and .160. This is not a lot of players. Once we remove the bad baserunners, the defensive sluggards, the platooners, and the guys who aren't as old as Ellsbury... the list is pretty short.

Unsurprisingly, this is a group of pretty excellent players, with Kenny Lofton being the best of the bunch. The obvious nightmare comp is Brian Roberts, who can't stay on the field. Everyone else, though, has so far been able to remain generally productive and healthy after age 30. In graph form: 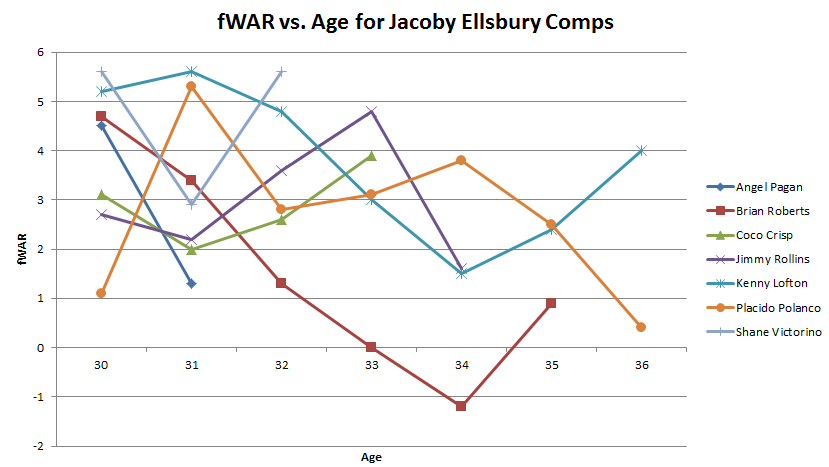 OK, so that graph is pretty confusing. We can mitigate some of the confusion by taking an average... 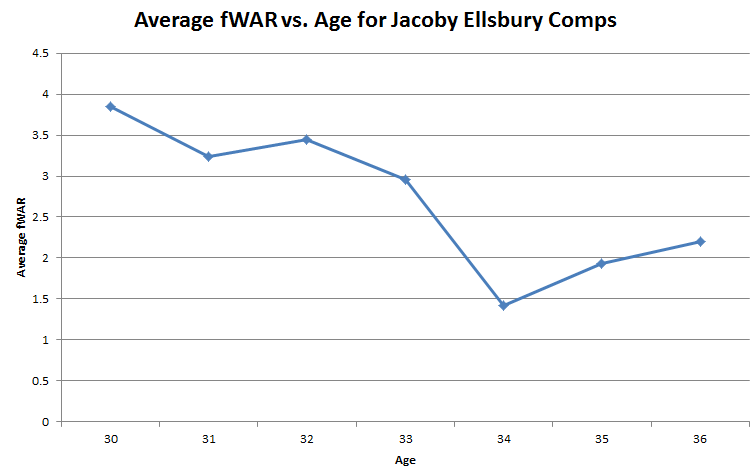 ... but we need to be careful. This graph is misleading, because a straight average neglects the fact that some of the comps aren't old enough to provide data for the right side of the graph yet. The first three points are probably trustworthy, but the fourth and fifth are a little sketchy, and the last two are just Lofton/Polanco/Roberts. Still, we've established a pretty reasonable range of outcomes for Ellsbury. The upside scenario is Lofton, who produced serious value well into his later years. The downside scenario is Roberts, whose career was destroyed by injuries. The most likely case, though, is that Ellsbury'll be somewhere in the middle, producing 3+ fWAR for four or five more years before declining past the point of real usefulness.

Answering the second part is also impossible, because we don't have the ability to predict the future. (Noticing a theme?) Inflation rates across MLB could spike, or the TV bubble could burst - any number of thing could happen to affect the valuation of a win over the next few years. However, based on the idea of linear win value inflation and the going rate of free agents on last year's market, we can take a guess.

One of the common misconceptions that causes people to think of Rosenthal's rumored Ellsbury contract as an overpay is the idea that a win is worth $5M. That's just not true. A win was worth about $5M, in the pre-2012 offseason, but since then things have inflated. If you use the 5% inflation rate proposed in the article linked above, the cost of a win this offseason should be about $5.5M... but there's also reason to think that that's low.

THE VALUE OF A WIN THIS OFFSEASON IS PROBABLY MORE LIKE $6.25M THAN $5M.

To figure out for myself what the current value of a win is, I looked at the contracts received by free agents during 2013 offseason. Using ZiPS projections as the best possible stand-in for preseason belief of what a player would produce in WAR, and then accounting for inflation of the value of a win and player decline through backloaded contracts, I created a table that spat out the average cost of a win last year. That value was $6M. (If you think that's high, consider it lucky I used ZiPS instead of actual 2013 production. Due to the high-profile busts of Josh Hamilton, B.J. Upton, and some other notable FAs, what teams actually paid in 2013 free agent dollars for each 2013 win was about $8M. If you remove the highly successful Red Sox from the calculations, the average cost of one win was closer to $16M. The market is risky, kids!) If you don't believe me, you can check out the spreadsheet for yourself here: 2013$WAR.

Anyways. If a win in 2013 cost about $6M, we'd expect a win this offseason to cost closer to $6.25M. That's 125% more than the widely accepted $5M figure, and I'm pretty confident that it's also close to 125% more correct. This affects our calculations pretty significantly.

OK. So, given that the current value of a win is about $6.25M, and given that that value is going to keep increasing at a rate of about 5%, what does the Age vs. fWAR graph for our Ellsbury comps look like if we replace fWAR with dollar value? Of course, in order to make this graph work, we have to pretend these guys' age 30 seasons occurred when the value of a win was $6.25M and rising, but that's not really a problem for the purposes of this analysis, so without any further ado behold the graph: 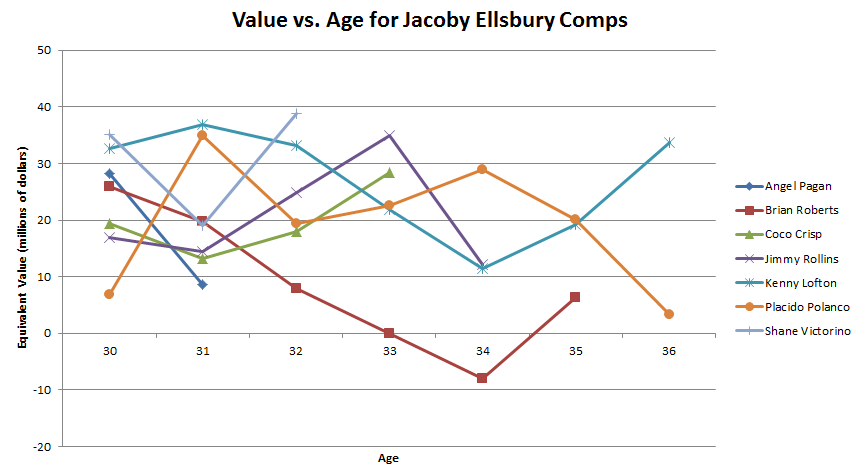 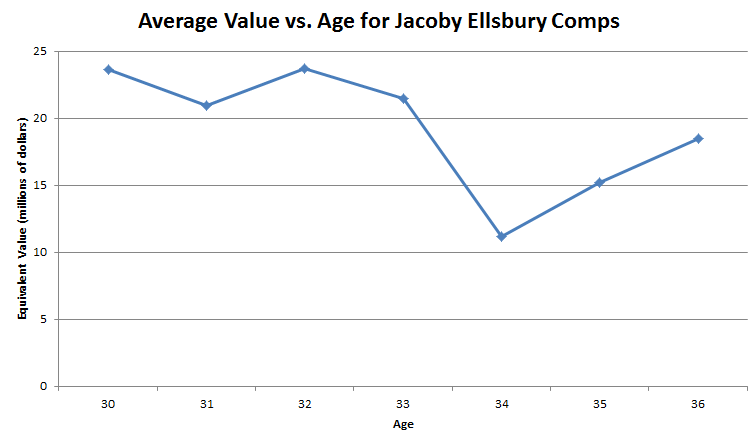 Basically, this graph is telling us that Rosenthal's proposed 6/126 deal isn't actually all that ridiculous. Ellsbury is quite likely to be worth it for at least the first four years, and while the graph falls off after that that's mostly because one of the four remaining comps (Roberts) imploded at age 34. Given the 2013 valuation of a win as $6.25M, these Ellsbury-comparable players have been worth about $22M 2013 dollars per year on average since hitting age 30.

FAIR VALUE FOR ELLSBURY IS ABOUT 5/$105M, BUT THE M'S WILL NEED TO PAY A PREMIUM JUST TO GET HIM

In conclusion: based on these graphs, I'd say that fair value for Ellsbury is somewhere in the neighborhood of 5 years, $105M. Of course, once fair value is established, we have to think hard about part 3 of our question: should the Mariners pay a premium just to get Ellsbury in the first place? They almost certainly can't offer him a fair-value contract and sign him, because Seattle is hardly a free agent hot spot these days. Adding a year or two to a hypothetical deal, at the same AAV, seems like a good way to interest a free agent in coming despite a lackluster team.

But now, alas, we've reached a question that really is impossible to answer. I can't even take a crack at it. I'm not sure I can quantify the value of getting a free agent to sign a contract with an undesirable team, or the value of Ellsbury's hypothetical impact on convincing other free agents to sign here. In a way it harks back to my lede: how much do you care about being able to just get a good player, even if you're paying a slight premium to do so? This offseason, it seems, we'll discover the Mariners' answer.