Ken Rosenthal predicted that Jacoby Ellsbury will sign with Seattle for 6 or 7 years at $21 million per year. That's a lot of money.

The rumors are starting early this year. This morning, Ken Rosenthal was on Boston Sports radio (WEEI), and predicted that Jacoby Ellsbury would end up in Seattle for the steep price of $21 million/year, over 6 or 7 years. The Mariners have been linked to Ellsbury all season long, given their holes in the outfield, the loose Northwest connection between both parties, and a few failed splashes over the past several offseasons.

Ken Rosenthal doesn't stir the pot for fun. If he comes out and makes a prediction, you can bet he knows there's some legs behind it. Nobody knows what other offers are going to be on the table, but it seems pretty safe to assume that the Mariners like Jacoby Ellsbury a lot. Enough to offer him an extremely lucrative deal and outbid what will surely be a fair amount of suitors.

This rumor, if you can call it that, comes on the heels of a Boston Herald article that endorses the Red Sox parting ways with Ellsbury, citing the tremendous risks in a long-term contract for a player recently turned 30. The Red Sox have Jackie Bradley Jr. in waiting, but Bradley is still a question mark, and Boston is firmly positioned to continue winning now. Losing Ellsbury would be a step back, but the money saved would be re-allocated. Ellsbury will probably price himself out of everybody's comfort range - but that's the name of the game when it comes to free agents in their early 30s.

The Mariners have been unsuccessful in luring any big name free agents to Seattle, and with Jack Zduriencik on the final year of his contract, the stars are aligning for the Mariners to make a big splash, at any cost. After all, if the Mariners don't show significant improvement next season, changes are going to be made. While Z may act like this offseason won't be one of panic, there is absolutely a sense of urgency for him to get better right away.

The Mariners have plenty of holes on their team, but the outfield is the most glaring. For immediate impact, there are few players that could instantly help the Mariners as much as Ellsbury. He's coming off a 5.8 fWAR season where he stole 52 bases and was only caught 4 times, played plus defense in center field, and posted a .343 wOBA. Ellsbury finished 13th in WAR despite missing 28 games.

Jacoby Ellsbury is not Chone Figgins.

Jacoby Ellsbury was a superstar in 2011, but he's not going to repeat his 32 dinger-fueled 9.1 WAR season again. What Boston got from Ellsbury at the plate this year is a fairly reasonable expectation for him for the immediate future, and as he enters his 30s, his speed is going to trend downwards sooner than later. Still, speed ages better than other traits, and a considerable amount of Ellsbury's value is built on it. One can't help but look at Michael Bourn, who stole just 23 bases and was caught 12 times this year at age 30 - right after his payday. His baserunning value dropped from 13.2 runs in 2011, to 6.6, to just 3.9 in 2013. Ellsbury, on the other hand, has seen his baserunning value increase in four straight years, peaking at 11.4 runs this year, and was on a similar pace before his injury in 2012. There's been no decline in defense, either.  While his decline is inevitable, there aren't any major red flags yet.

The term injury-prone gets thrown around a lot with Ellsbury, and it's not entirely fair. Ellsbury has missed a lot of time - most of 2010, half of 2012, and a chunk in 2013 as well - but his injuries aren't of a repeating nature. There's no ailing elbow, balky hamstring, or bad knee. He's not Matt Kemp. Ellsbury's injuries have been a lot of bad luck, really. A collision with Adrian Beltre in 2010 broke four ribs and wasted his year. In 2012, he smashed into Reid Brignac at 2nd base and dislocated his shoulder. This year, he fouled a ball off of his foot and fractured it. Ellsbury's injury history doesn't read like a guy with major red flags, just a guy who has been in the wrong place at the wrong time more than anything else. There's less concern about Ellsbury continuing to get hurt than there is with other players who have missed similar amounts of time. 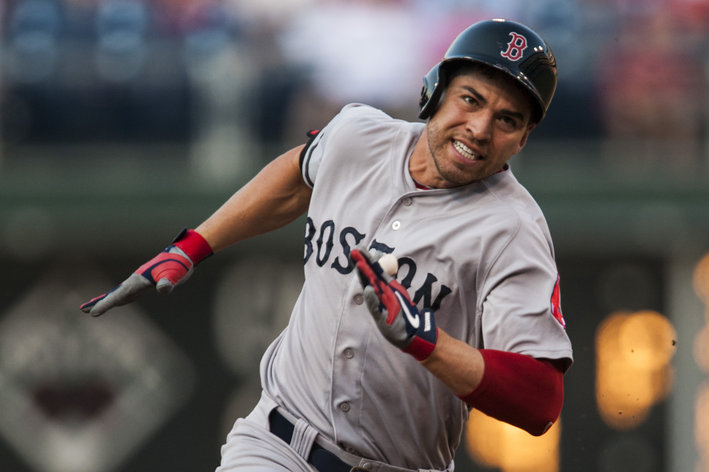 The price for Ellsbury this winter is expected to start at B.J. Upton and go up from there.

Additionally, to get one thing straight - Jacoby Ellsbury is not Chone Figgins. This is an inevitable comparison that will be made, given the way the Mariners were burned before and the loose similarity in skillsets between the two. Figgins was 32 before he even put on a Mariners uniform. Ellsbury would be 30. Figgins had no power, and Ellsbury does. Figgins fell off the table faster than anybody expected, and a repeat performance from a younger and better player shouldn't be expected. Ellsbury is a better free agent than Figgins was, and that's exactly why Rosenthal is predicting he'll cost up to almost $100 million more.

It's a lot of money. That dollar prediction is probably influenced by a general notion that the Mariners are going to have to overpay to land a free agent when they're still far from contending, and that's probably accurate. Ellsbury is going to get paid. He's having a great postseason so far, and that will be a factor as well - call it recency bias, call it the Jerome James effect - every major hit or stolen base Ellsbury racks up in the playoffs are dollar bills leaking out of some team's pockets.

It's not the time to make a declarative statement on whether or not this is a good move, because it's just a prediction, and it's still very early. Ellsbury is a wonderful player who could very easily be worth that kind of money for the first 2 or 3 years of a long term contract, and probably worth a whole lot less than it on the back end. The Red Sox are going to make a qualifying offer, and the Mariners have their top pick protected in 2014. If the Mariners do make a major splash to land Ellsbury, they're going to make more of them to get this team over the top and into contention. Ellsbury, at the right price, would be a great addition. If this prediction is any indication of what's to come, he's probably going to cost more than a comfortable number.