Have the Mariners been spending cable money on off-the-field enhancements?

Share All sharing options for: Have the Mariners been spending cable money on off-the-field enhancements?

The Mariners search column is a funny thing. I'm referring, for those blissfully unfamiliar, to the Tweetdeck column pulling in all tweets mentioning the word 'mariners'. When big news breaks, the thing waterfalls like those screens in The Matrix. I've found some random cool things on there, including a photo of the exact spot—smudge and all—where Mike Carp's epic Hit-It-Here Cafe shot landed (since taken down), and I believe I was one of the first to see the M's hired Aaron Goldsmith because of this tweet.

But, for the most part—this column is flush with obnoxiousness and excessive negativity.

"Excessive," with the state of the franchise, is of course up to one's own interpretation. But to give you an idea, it's a lot of stuff like this.

@SergioMillar to bad my Mariners won't be there for a while

Late last year, when the Mariners announced they'd be adding Major League Baseball's largest video screen to Safeco Field, you can guess how this column looked.

"HOW ARE YOU SPENDING MONEY ON A VIDEO BOARD AND NOT PLAYERS!?!?" was, generally, the cry.

Being the optimist, and what I assumed to be the realist, I shook my head and thought "that's not how this works." The money isn't pulled directly from the team's payroll and applied elsewhere—of course not. Especially when the team isn't, and hadn't recently been any good.

I mean, the Mariners even said so themselves:

Along with other projects that will be announced later this offseason, the stadium renovations and new scoreboard will cost the Mariners about $15 million. That money comes from a different budget than player payroll, which the club has said could be increased from last year's $91 million at the start of the 2012 season.

The payroll ended up being $84 million—despite Howard Lincoln saying recently it was that same $91 million as in 2012. To be fair, the payroll would have gone up had the Mariners succeeded in signing Josh Hamilton. But let's get back to the Howard Lincoln comments, as it's something he said in response to a question by Ryan Divish on the cable deal that caught my attention recently.

The impact of the cable deal, which was estimated by Forbes to be worth $2 billion over 17 years (an average annual value of $117.6 million), has been a source of speculation for the many, like myself, who'd hoped the Mariners would have even more money to spend than what's coming off the books.

Though it is still possible payroll will rise above 2013's $84 million, it won't be on account of the lush cable rights deal. "Nothing is going to happen in 2014," said Lincoln in the interview with Divish.

But when Divish pressed him, asking if a bulk of the cable money would be going to the on-field product, Lincoln's answer was telling—and seems to contradict what was inferred by the press release announcing the new video board, that it wouldn't impact player payroll:

At this point, we got into this with the idea that this would enable us to supplement not only our major league payroll, but the other things we spend money on. I think the fans need to understand we’re not just spending money on major league player payroll. Right now, we are building a new academy in the Dominican Republic, that’s not free. Right now we are in the process of building a new facility down in Peoria, our spring training facility. Last season we put in one of the most expensive scoreboards, largest scoreboard in baseball. That was not inexpensive.

Yeah, that stuff is pricy. Honestly, I hadn't even heard about the spring training complex renovations, and if the Mariners announced it I must have missed it. It isn't clear how much this will cost the Mariners this year, and the renovations I believe will be partially funded by the city, but in their new lease with the Peoria complex, the M's and Padres have earmarked a combined $48 million for renovations.

This year's work appears to be off and rolling:

Stopped today at Mariners' complex in Peoria, where offices/clubhouses getting a major remodel. More photos to come. pic.twitter.com/dnVBMoAtQ1

Unless the Mariners have something they've yet to announce—and these things do tend to happen later in the offseason—that looks like this year's big project. Over the past few seasons, the Mariners have had several of these projects. To provide a frame of reference, a little correlation, the Mariners began negotiating their cable deal in 2010. Here are the projects they've announced or completed since that year, when they initially got a sense of their impending windfall.

Now, I want to note, there's only correlation and not causation here—it's possible the money could've been pulled from old savings. I say old, relatively, because it isn't from the past couple years. Since 2008, the Mariners have actually lost $1.12 million. Here's how that looks: 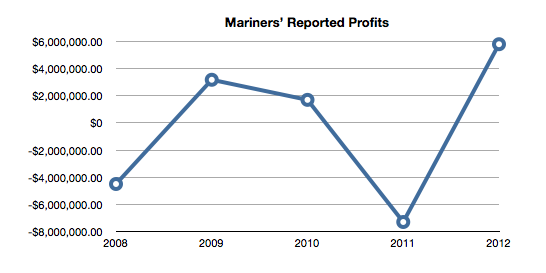 But before 2008? Though it makes sense with the early-aughts success, you probably don't even want to know: the Mariners turned $97 million in profit between 2001 and 2007, despite making the playoffs only that first year. Though it doesn't compare to the rise in the franchise's valuation, that's a nice return on a couple years of good baseball and—of course—Safeco Field, for which taxpayers contributed close to $400 million, and were still paying for until August of 2011.

To close this out, I don't have any information that isn't already out there. All we have is correlation and while it is a strong correlation, and one the Mariners' CEO drew himself—there's no saying it's causation.

Also, even bigger to point out: there's nothing implicitly wrong with this. The Mariners have said they were building the foundation, and parts of this apply. The training academy in the Dominican Republic is the most obvious, and the renovations down in Peoria are to the entire complex, not just the main stadium—and that's the Mariners' offseason facility. That is to the Mariners what the VMAC is to the Seahawks.

Now, with the stadium improvements, the articles on the new video board say "the Mariners are responsible for keeping Safeco Field a 'first class facility'" as part of their agreement with taxpayers. And it is—they've done a phenomenal job.

But being the eternal optimist when it comes to the M's, I hope it's more. If you were about to sell a house, you'd probably consider redoing the floors, renovating one of the bathrooms, maybe adding a back patio. The Mariners are debt-free, have one of the five best ballparks in the game, are lining their pockets with a nice new cable deal and have but one expensive long-term contract.

But the Mariners have said they're not selling.

If that's truly the case—and you never really know—I hope we start seeing the same investments on the field as we've seen off of it.