Share All sharing options for: Mariners will make qualifying offer to Kendrys Morales

Jack Z had a bunch of things to say on the radio this afternoon, and a lot of them were fawning over Kendrys Morales. He's determined to bring him back, and here's what he said, courtesy of Greg Johns.

This isn't exactly a surprise. I predicted that the Mariners would do this, and agree that it's the right decision, for a couple of reasons. I do think that the estimated $14 million dollar salary Morales would receive is a considerable overpay, but I also don't think Scott Boras is going advise that Morales should accept the offer. Boras has just a week after the offer is made to decide whether or not to accept the offer after it's made, and it'd be a surprise if he settled for a one-year deal, even for a player like Morales with a limited market. If you missed the full argument, you can read it here.

On the other hand, Logan pointed out last week that Morales has actually been worth the qualifying offer if you use Baseball Reference's WAR. That's all in this article.

The qualifying offer protects the team's investment in Morales, even though it comes at a risk, albeit low. Z doesn't want to let Morales walk with nothing to show for it, so he'd rather overpay than risk losing a steady bat in the lineup -- even if it's an unspectacular one.

Some people are convinced that Morales will accept, given his pedestrian past two seasons and lack of a market for teams who may want to give up a pick for a non-elite designated hitter. A lot can change in the next month, and the offer has yet to be made. Fortunately, we'll know within a week of the World Series ending whether the Mariners are stuck overpaying a DH on a low-risk contract, stuck overpaying for a long term extension, or left with all of their money and a free draft pick. I hope it's the last of the three.

Making Kendrys Morales a qualifying offer is the right decision 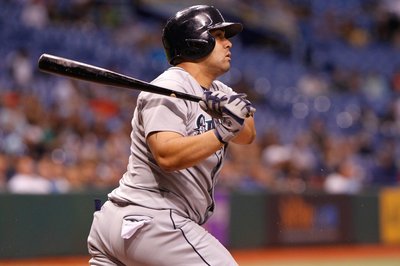 The upside of Morales declining outweighs the downside of him accepting, and with Scott Boras, declining is the more likely scenario. Make that offer.

Even if he declines, there's still a good chance Morales is back anyways. Scott Boras is a master at getting teams to bid against themselves when there's very few suitors, and this is starting to smell like that. A declined qualifying offer makes Morales a poison pill on the free agent market, especially to teams with an unprotected draft pick. The Mariners would be the most logical fit, and perhaps the only one. Boras has leveraged situations like this in the past to get his clients multi-year deals despite tepid league-wide interest.

The ideal chain of events would be for the Mariners to extend the offer, watch Morales decline it, see Boras play his game to no avail, sign somebody off the bargain bin for DH next year, and wait until February for Boras to come crawling back, signing Morales to a market value contract. I wish this was a more plausible scenario, but I have no faith that's how things will unfold. Instead, I fear the Mariners will be left bidding against themselves to sign Morales to a multi-year deal.

One way or another, I expect Kendrys Morales to be back in a Mariner uniform next season. The team wouldn't be so outspoken about a qualifying offer if Morales wasn't a guy they wouldn't mind coming back, and all indications are that he's a top priority. I just wish this all of this action was over a better player.