Share All sharing options for: Ranking Mariners' Prospects Using Their Age and League

Taijuan Walker posted a 103 xRA+ in Double-A Jackson last season. James Paxton also spent 2012 in Jackson, but he posted an xRA+ of 121. Danny Hultzen only spent part of his time in Jackson, but while there his xRA+ was 140 before going up to Triple-A and disappointing. How would you rank those three seasons?

Note that last question was not "how would you rank those three prospects," and that wording is intentional. A prospect's stat line only captures part of what's needed to evaluate him. Scouting reports are hugely important. They are crucial to evaluating how well a prospect will develop. Unfortunately, those reports aren't typically publicly available or easily quantified. The question of ranking prospects relies, and should rely, heavily on those reports. However, perhaps the question of ranking prospects' seasons can be more directly addressed.

On StatCorner, I already provide performance metrics such as park-adjusted wOBA and xRA for minor league players. There are two other factors that I specifically look at though that we certainly take into consideration, but haven't integrated, age and league.

With players in the majors, league doesn't play a large factor, though we do still hold more suspicion on performances in the National League. In the minors, it's a much more important deal and not just because of the differences between the Southern League and the Texas League — both Double-A leagues — but also because of the cavernous differences between the Pacific Coast (Triple-A) League and the Midwest (Single-A) League.

I wanted a formula to give credit to players for performances at higher levels. That's nothing new as Major League Equivalencies have been around for a while. I took the same concept and much of the same numbers and assigned a bonus to each player based on his playing time at each level.

Age is a universally important factor. Even in the Majors, we get more excited about performances from youngsters than from guys nearing their mid-life crisis period. But as far as I know, it had always been regarded alongside performance and league, not incorporated into a formula with the latter two. I give younger players a much bigger bonus and then taper it off as players reached their late 20s. 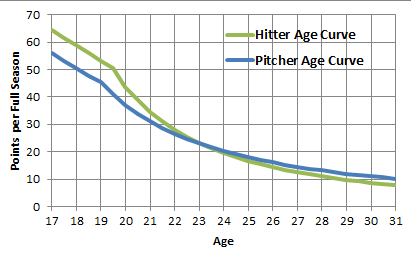 Mostly it is an inverse-squared formula but, as you might notice, I replace that with a more linear function for players younger than about 19.5 because otherwise the values get way too big. Additionally, I use different formulae for hitters and pitchers because I feel that pitchers follow less of a traditional development curve.

This gives me four factors to weigh for a prospect, his position, his performance level (by wOBA or xRA), his age bonus and his level bonus. Adding all four together, with some weighting on each factor to correspond to how important I figure it is, gives a single (admittedly arbitrarily scaled) number from which I can rank each season against each other.

The great part about having one formula to handle all these factors is that once I settle on values and weights that I think are acceptable, it's automated. That means I can run it whenever I want on whatever sample I want with hopefully no personal bias.

In addition, I thought it would also highlight some players that fall through the cracks of usual prospect hype, typically because of their advanced age or underwhelming scouting reports. But scouts are fallible, and sometimes teams find guys like Jack Cust, who won't carry your franchise for a decade, but can provide a lot of value for cheap.

Here are the top ten hitting seasons in 2012 from the Mariners' farm system under my current weightings.

Just off this list at 11th is Mike Zunino. He is limited by his small number of plate appearances last season, but nonetheless he almost vaulted into the top ten.

After Zunino, Franklin, Miller and Romero are typically the consensus top hitting prospects, though much of that has to do with all three playing up the middle positions for now. However, all three also had above average seasons with the bat, are young, and are already playing in the upper minors.

Luis Jimenez is not a prospect in the way almost everyone uses that word. He's not even a Mariner any more, having signed with the Blue Jays this winter. But he serves as the quasi-Jack Cust example I mentioned earlier. If Jimenez had gotten a real chance with the Mariners and put up something like a .350 wOBA, do the Mariners keep him? Maybe he gets that DH job and the team doesn't throw money at Raul Ibanez. A potentially league average DH for no cost, even if he's already 31, isn't worthless.

Do you remember that Carlos Triunfel hasn't even turned 23 yet? He hasn't had a really impressive season since his very first, but he keeps moving up and not drowning. Our expectations were too high after he initially came to America, but perhaps too many have gone too far and totally given up on him.

High-A High Desert makes hitters look great and pitchers look awful. Mostly, people have responded to that by discounting anything that anyone does there, but that's a bit unfair to the pitchers that do succeed in that harsh environment. There are a couple great examples from 2012 in partial or whole seasons from Anthony Fernandez, Trevor Miller, Roenis Elias and James Gillheeney.

Bobby LaFromboise is the only reliever to make the top ten and I'm pleased by that. I think it should take a lot for a reliever to be considered, but that it shouldn't take so much as to be impossible.

As they are, I am satisfied with how these rankings shake out. I expect to make some tweaks in the future, but hopefully, I have or can arrive at a stable weighting so as to be consistent. If so, expect to see these back or influence at least some additional minor league coverage in 2013. Because, what else is there to do?