On Edgar Martinez And Getting Hits

Share All sharing options for: On Edgar Martinez And Getting Hits

Today -- Wednesday -- is David Cone's 50th birthday. At present, he's a color commentator on YES, but he made his name as a major-league starter, debuting in 1986 and pitching into 2003. He threw a perfect game, he was a member of five world champions, he logged more than 3,000 innings, and he posted a career ERA of 3.46, good for a 121 ERA+. In 1994, he won the Cy Young. Four other times, he received votes, and overall he averaged nearly a strikeout an inning. David Cone was an outstanding starting pitcher. He's also the second-best major-league player born on January 2, 1963.

I don't know how we're supposed to honor Edgar's 50th birthday, but I suppose thinking about him a little might be enough. We should probably think about him more often, and we probably will in the future, once Edgar's is a fixture beyond the Safeco outfield. Edgar Martinez has been one of the very greatest Seattle Mariners ever, and if you give him bonus points for never wearing another uniform, maybe he's even atop the list. There's subjectivity here, but Edgar's in the argument.

I'm not going to get into the Hall of Fame debate, because it's all been written and you already all agree with me, probably. I'm willing to acknowledge that Edgar isn't a shoo-in, if you believe in keeping the Hall small. There is a reasonable argument against his induction. But since 1900, 841 players have batted at least 5,000 times. Edgar ranks tied for 26th in wRC+, which is like OPS+, but smarter. He's tied with the active Miguel Cabrera, one point behind Jeff Bagwell, and one point in front of Mike Schmidt. Absolutely, Edgar was a designated hitter who didn't add much with his defense or legs. Absolutely, Edgar is one of the very best hitters the game has ever seen. He belongs in the Hall more than he doesn't, and hopefully, eventually, he'll make his way there.

This post is just about a graph. It's the graph you see below, because I wanted to put something up about Edgar today. Over the years, we've all been inundated by Edgar Martinez statistical fun facts, illustrating his greatness. This is just another. Conclusion: Edgar Martinez was a great hitter. Evidence: this graph, and lots of other stuff, too. 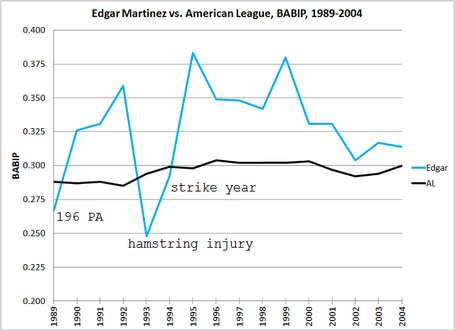 Don't be frightened by seeing "BABIP" in the header -- this isn't very complicated. You'll recognize BABIP as referring to Batting Average on Balls In Play. Edgar debuted in 1987, but he didn't start getting regular playing time until 1989. So here we compare Edgar Martinez's year-to-year BABIP to the American League-average BABIP between 1989 and 2004, when Edgar retired.

The teal line is almost always above the black line. Edgar's BABIP was almost always better than the league BABIP. In three years, Edgar's BABIP was worse. In one, he tore his hamstring before the season, played hurt, and fell short of 200 plate appearances. In another, he fell short of 200 plate appearances, as a rookie in 1989. And then there's the strike-shortened 1994, in which Edgar didn't reach 400 plate appearances. In every season in which Edgar batted at least 400 times, he beat the AL-average BABIP, and the closest margin was 12 points. By then, Edgar was 39 years old.

Edgar's career BABIP was .335. Over the same span, the AL-average BABIP was .296. It's true that Edgar probably got a boost from playing so often on artificial turf, but his road BABIP was .334. His BABIP in Safeco was .326, and by then Edgar was getting old. Edgar Martinez was a hit-maker.

It isn't that uncommon to see players post higher-than-average BABIPs, but Edgar's was well above the mark, and additionally, the players with high BABIPs tend to be speedsters, guys who beat out a lot of grounders. Look at these numbers and then consider Edgar's footspeed. Edgar wasn't generating singles by out-running grounders up the middle or in the hole. He was never much of a runner, especially after his injury. Edgar was generating hits because he consistently drilled line drives to all fields.

That's really the main thing here. A one- or two-year BABIP spike tends to regress or disappear, even though BABIP is more reliable for hitters than for pitchers. It takes a while before you should believe that a high BABIP is indicative of skill. Edgar batted nearly 9,000 times, generating nearly 6,000 balls in play. In his case, it's indicative of skill. Edgar really was a line-drive machine, relative to the rest of the league. He really was more able to square the ball up, and he was a danger to left, right, and center, preventing opposing defenses from figuring out a shift. There wasn't a way to defend Edgar Martinez. The only guaranteed ways to make sure Edgar didn't get a hit were to walk him or bean him. If the ball was in or near the strike zone, there was a good chance Edgar was going to punish it for its nerve.

Blessed with better athleticism, Edgar might've posted a BABIP damn near .350. Blessed with better athleticism, Edgar might've been inducted to the Hall of Fame already. But Edgar was a guy whose body tried to fail him in more than one way, and he posted a .335 BABIP anyway, with one of the best batting lines on record. The voters will determine whether or not Edgar Martinez ever makes it into the Hall, but the voters won't determine whether or not Edgar is one of the all-time greats. That's already been determined. By Edgar, and by the pitchers who had the misfortune of facing him.