Seattle Mariners 2012 in Review: The Arms

Share All sharing options for: Seattle Mariners 2012 in Review: The Arms

I introduced the concept of xRA a few days ago. Essentially, it is like if tRA and xFIP hooked up and someone was negligent in the prophylactic arena. Basically, xRA takes tRA's framework and splits each batted ball type into two groups, introducing the pulled and opposite versions of each. It then does away with counting actual home runs and instead estimates the number of home runs allowed based on that expanded batted ball profile.

In some quick tests, it showed itself to be a less variable metric than tRA while still retaining the facets that I think are superior to the FIP-family, namely it's inclusion of batted ball types in the first place. I laid that out in the linked post above, which mostly covered the thought process and methodology of the metric. When nobody pointed out a fatal error that I had overlooked, I proceeded fleshing it out. Yesterday, I rearranged the player pages on StatCorner to add xRA and a few other stats that I've looked into over the past couple months including zBall (zTkB now) and oStr (oTkS now) from this look at pitch framing.

That first post necessitated a heavy dose of math and theory, no matter how much I tried to keep it from being drier than British humour. With those 2,000+ words of exposition established, I am free to trot out real-world examples. Of first interest I anticipate are the pitchers who suffered big differences between tRA and xRA.

To start with, the pitchers who benefited the most from a move away from actual home runs to an expected home run total include Ervin Santana, Henderson Alvarez, Tommy Hunter, Felix Doubrant, Clayton Richard and Liam Hendriks. All of those pitchers saw enough of a dip from tRA to xRA to warrant a change of over 10 runs in value. With Santana, it was an extreme 22 runs! Santana might be irreparably broken, but given this, he might also be a decent buy low candidate for the Royals.

On the other side, the pitchers with the greatest downgrades under an xRA-based measurement include Clayton Kershaw, Jered Weaver, Jarrod Parker, Wade Miley, Aaron Harang, Jake Peavy and Jose Valverde. Back in May, Jeff noted a reason why Jered Weaver might be getting an extra advantage from his home park in certain circumstances and Weaver's overall home run rate is considerably lower than we'd expect.

None of the above people are Mariners though, so let's discard the rest of baseball and just focus on Seattle now. First comes the rotation and their breakdown.

All told the rotation lost some of its value. The only beneficiaries were the two you might expect given their home run issues during the season, Hector Noesi and Hisashi Iwakuma. If you thought Jason Vargas would be on that list, so did I, but it turns out that his batted ball allowed profile in 2012 justified his high home run total. Perhaps the Mariners will not be rueful about trading him this winter.

Turning to the bullpen naturally shows more volatility and change.

Again we see the expected in a steep increase in value from Steve Delabar after his home runs gets replaced with a more expected number. There's no doubt that Delabar has a lot of talent and he'll likely be an important cog in the Blue Jays' bullpen next season.

The above two tables offer no information that isn't available on the redesigned StatCorner pages, but the below does. I took the rotation's and bullpen's xRAs each day and charted it against the league average and then converted to runs better or worse than league average to create a time line. 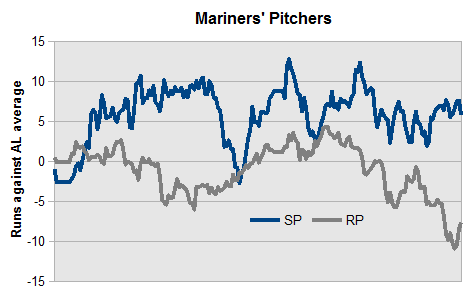 The big dip in the starters' graph is in June, when the team allowed nearly 4.8 runs per game compared to 3.9 during the other months of the season. It rebounded just as fast in July as the Mariners allowed an insanely small 3.0 runs per game as a team. Removing those two months, the rotation was quite stable over the season which isn't surprising given that they employed only seven starters the entire year. That stable mark was right around league average.

The bullpen appears to see more differing periods, but also deals with small samples so I wouldn't read much into it vis-à-vis the personnel involved.

The last part I was curious about were the individually best and worst games according to xRA so I broke those out as well. As expected, Felix Hernandez dominates the list of best games. Totally unexpectedly, the actually best game was not from Felix.

Noesi's game doesn't pop out, but it involved an incredible nine pop ups and only two fly balls got pulled against him. No other starter in any Major League game in 2012 induced more than seven pop ups. Now, generating that level of infield flies isn't sustainable by anyone unless a pitcher only faces Brendan Ryan, but it is worth noting that Noesi, even in the minors, maintained a much better than average pop up rate.

I feel that everyone has already completely written Noesi off in terms of contributing value to the Mariners. He isn't part of the current penciled rotation and when talking about replacements, people always reach to the prospect groups. Maybe there's some hope for Noesi though if he can get some reversion from the home runs, especially on 0-2 counts.