Share All sharing options for: Seattle Mariners Weekend In Review

Used to be that, when I missed some Mariners games and write-ups, I felt compelled to apologize and issue an explanation for my absence. I don't know why I used to do that, and I don't know why part of me still feels that way; no one can expect someone else to cover every single game in the baseball season, and this is just a free blog, and nothing's ever a big deal. Still, blogger guilt is a thing, even if it's a difficult thing to relate to, and some degree of blogger guilt is probably healthy, if you want to be a good blogger. You shouldn't not feel any obligation to the audience.

I'm not going to apologize here, though. Next weekend, I'm going to be unavailable for reasons that have to do with real life. This weekend, I was unavailable for reasons that had to do with real life. I watched only some chunks of one game -- Sunday afternoon's game, between the Mariners and the A's. I checked out the box scores and the highlights of the other two games. The Mariners lost all three games. The A's swept the M's in Safeco Field 6-1, 6-1, and 4-2, and to make matters worse, the first game was started by Felix Hernandez.

This was just...I'm not going to apologize for not being around to write about any of this. And you shouldn't apologize for not wanting to read about any of this. Every time -- every single time -- I miss a Mariners game, some part of me worries that something amazing is going to happen, that I'm going to wish I was able to write, so I tend to keep up with the progress on my phone when I'm able. There was nothing amazing this weekend. There was not one single thing, unless you keep an extremely low amazement threshold. I guess Luis Jimenez picked up the first major-league hit of his career, and that's a great story that could've used a little attention. But the Mariners lost three games in a row to Oakland, and the Mariners scored a total of four runs.

It would be one thing if this series had meaning to the Mariners, if anybody came into this weekend thinking about the Mariners, but now most of us are at the point where we wouldn't mind if the season were over. A considerable chunk of the Mariners fan base approached this weekend thinking about the Seahawks, Huskies, Cougars, Ducks, Beavers...football teams, basically, getting ready to play football games, and though I don't care about any of the football, I know an irrelevant baseball series when I see one. There were lots of A's fans who cared about this series, I'm sure, but not a lot of Mariners fans. Kudos if you did care about this series as a Mariners fan, and, I'm sorry.

I think there's one way to come away from this series feeling all right as a Mariners fan, and that's if you're really strongly pulling for Oakland in the playoff race. If nothing else, the Mariners did the A's a huge favor by losing three games at home in a row. The Angels are playing much much better of late, closing to within a game of the second Wild Card, but they didn't gain any ground on the A's, because the A's didn't lose. The Mariners sort of played spoiler against the Angels by not playing spoiler against the A's.

Of course, not everyone considers the A's to be a feel-good story, or a team worth pulling for. They are, after all, division rivals, and they've done a lot of harm in the past, like by playing the Mariners and having us watch the A's play the Mariners on TV. I'm personally hoping that the A's move on and that the Angels do not, because I find the A's a lot more tolerable than I find the Angels, but I know full well that not everybody shares my opinion. If every single person shared my opinion, I think it would cease to be an opinion and start to be a fact.

For me, there are two silver linings:

(1) At least the Mariners helped the A's and hurt the Angels, and the Tigers
(2) At least I didn't really watch any of this

If you're not rooting for the A's, maybe that's because of things they've done to the Mariners in the past, or maybe that's simply because they're rivals who play in the same division. Or maybe it's because you remember how the A's and the Mariners were supposed to be really similar this season, and now the A's are thinking about the playoffs while the Mariners are thinking about playing against teams thinking about the playoffs. The AL West was supposed to be Rangers/Angels, and then A's/Mariners, and now the A's are 13 games ahead of the Mariners with some weeks left to play. It's understandable to be bitter or jealous; maybe it's right to be bitter or jealous.

Brendan Ryan caused a minor stir the other day when he said:

"I mean no disrespect when I say it, but on paper [Oakland is] not the most intimidating team,'' Mariners shortstop Brendan Ryan said.
...
"They've got some things working, and it's an even bigger tip of the hat they're getting it done without - no disrespect again - without marquee names and all that stuff. That's just good baseball, and they're finding ways to get it done."

Ryan meant it the way he said it, and he was being completely genuine. He also didn't say anything wrong -- Oakland isn't that intimidating of a team, on paper. But it's a good team, a good team with good players who aren't really stars, and they work as a handy counter-example to the argument that you need to load up if you want to play in the playoffs. It's never about stars, directly. It's about overall talent and depth, and the A's have proven that they have a lot of overall talent and depth. The Mariners aren't there yet, but they could be soon, depending on the developing fruits in the farm system.

I can't leave without doing the one thing I can't stop doing, even if you guys don't find it as interesting as I do. These days I'm constantly reviewing intended pitch location and actual pitch location, and Sunday afternoon, the big blow was a three-run homer by Jonny Gomes against Jason Vargas. It happened in the top of the fifth, in a 1-and-1 count with two outs, and Vargas was trying to attack Gomes with a low inside fastball. He threw a fastball like he wanted, which is good -- it would be neurologically worrisome if he threw one pitch when he meant to throw another. But I wouldn't call it a low inside fastball. 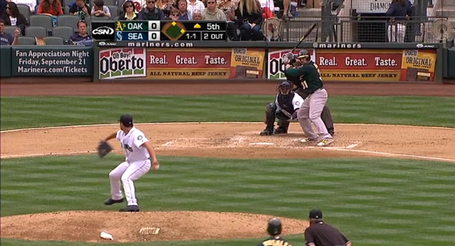 Not a bad idea! 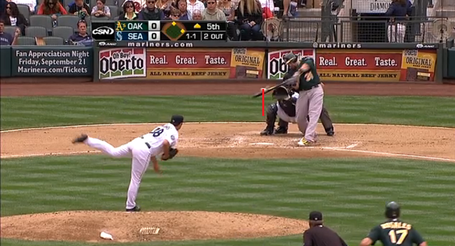 Everything after the idea was bad!

The red bar just marks the vertical distance by which Vargas missed his target. The horizontal is more difficult to figure because of the off-center camera angle. The horizontal wasn't really the problem, as Gameday put this pitch on the inside edge. But instead of a fastball at the knees, Vargas threw a fastball at the belt, which is the complete opposite side of the zone. From a distance of 60 feet away, it's not easy to spot a pitch in a certain small area, but this pitch missed in the strike zone by approximately the height of the strike zone. It stands to reason that Jason Vargas has a smaller margin of error than a lot of pitchers, and this pitch was outside of the margin.

Vargas, for whatever it's worth, knew immediately that he'd allowed another home run. He's allowed a lot of them this season, so maybe he's becoming increasingly adept at recognizing them off the bat. But this was a home run in Safeco, and Vargas hasn't allowed so many of those, and it's so late, it's so late on a Sunday and I'm so tired, I don't know how to finish this sentence, why did I start this sentence, what am I doing