What Wladimir Balentien Has Been Up To

Share All sharing options for: What Wladimir Balentien Has Been Up To

Every so often I'll get in casual conversations about Twitter, and I'll ask why other people use it, and they'll ask why I use it. I don't use it to follow comedians or celebrities or many athletes, although I do appreciate a good joke when I see one. I use it to stay up to date with Mariners and general baseball news, and I use it so people can send me tweets including links to videos like the one in this post. This is one of my favorite videos, and if it weren't for Twitter, I might not have ever seen it.

You must remember Wladimir Balentien, one-time slugging Mariners prospect. For a time there was a segment of people who liked him as much or more than fellow prospect Adam Jones. Of course, that completely discounted Jones' defensive advantage, and of course Jones is having tremendous success in the majors while Balentien is now playing in Japan, but Balentien is having tremendous success in Japan. So he's got that going for him. What you see below, he did yesterday.

Let's go ahead and just pause that real quick: 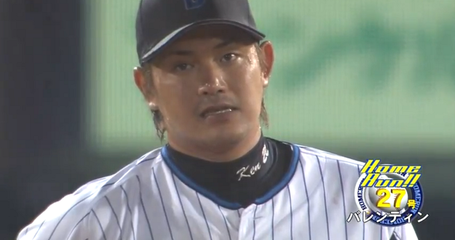 That is a home run, completely out of a ballpark, in the pouring rain. Raw strength was always Balentien's greatest skill and when he squares a baseball up, the moon is like "that didn't come very close to me at all honestly but it came closer than most other batted balls." Balentien hits impressive home runs. He always has, but now he hits more of them.

This is Balentien's second year in Japan, with the Yakult Swallows, and his present line is .271/.403/.635. That's great on its own, and now consider that the Japan Central League overall has a line of .243/.310/.340. Balentien has hit 26 home runs. That is nearly seven percent of the league's home runs. It's 33 percent of his own team's home runs. There aren't a lot of players like Wladimir Balentien in the Japan Central League.

Balentien is just 28 years old, and he might find his way back to North America, provided the gains he's made in 2012 stick around. Even if he's never a quality regular here, though, he will have been a baseball superstar somewhere, and there aren't many people who can say the same.