Share All sharing options for: Mariners Continue March Toward End Of Season, Lose

I know I've pointed out before how close we're getting to the end of the regular season -- or, as far as the Mariners are concerned, the end of the season -- but with every passing day, with every passing minute, we're the closest that we've been. Wednesday night, the Mariners lost to the Angels 4-3, and the Mariners lost in walk-off fashion, but more importantly for the Mariners, they're now done with 155 baseball games. There are only going to be another seven baseball games until Mariners baseball hibernates and comes back looking completely different, but let's be real here, probably very much the same.

Seven baseball games. It's hardly any baseball games. It's a week's worth of baseball games, and one week from now the 2012 Mariners will be done, barring some tragic multi-team catastrophe that leaves the Mariners in the race by default. It's really easy, when you're watching a game, to get wrapped up in what's going on; it's really easy after the game, at this point in the season, to not care about the outcome of the game even a little. With their loss yesterday, the Mariners officially made it impossible that they could finish .500. With their loss tonight, the Mariners whatever. They had an effect on the Wild Card race, but they helped one division rival and they hurt another division rival. I know that some of us really really can't stand the Angels, but many of you really really can't stand the A's, so it's kind of a wash.

Here's the thing about playing spoiler: it can be fun, and it can give purpose to what would otherwise be largely purposeless games, but the satisfaction is temporary. It feels good to knock down a team you don't like but ultimately if your team is playing spoiler, your team isn't that good, and that's what matters the most to you. If the Mariners end up blocking the Angels from the playoffs, we can all celebrate and get drunk for an evening, but when we wake up the Mariners will still be the Mariners. And if the Mariners do nothing to stop the Angels' surge, well, kind of the same thing, only without the drunkenness. If I had my druthers the Mariners would be giving the Angels absolute fits but that would serve to only partially fill my dark hollow soul. So it's not the end of the world that the Mariners lost again. The Mariners have lost a bunch, sometimes to the Angels, sometimes to other teams.

Tonight's game was conflicting, is what it was. For those who wanted the Mariners to do damage to the Angels' playoff odds, tonight's game was a failure. But tonight's game also hit on three big keys, keys to making a game like this both fulfilling and worthwhile. The players responsible, in an order, but not in an order that means anything:

All of them accomplished different things with their performances. Things that we can take away to make this a game worth having experienced. To begin with, Miguel Olivo gave us something to be mad about, something to be emotional about. Olivo committed a throwing error, and he went 1-for-4 with a double play, and he was immediately erased from the basepaths after his single. But none of that is what people are going to remember, because they're going to remember Olivo for the ball that got by him in the bottom of the ninth. 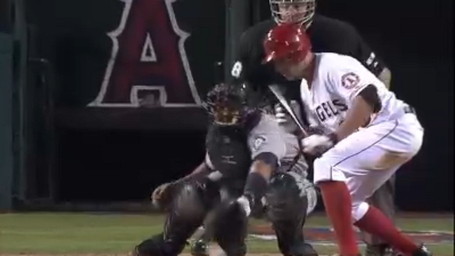 We're a week away from the end of the Mariners' season, which means we're presumably a week away from the end of the Miguel Olivo Era. For the Mariners, this game didn't really matter, so it's not a big deal that Olivo committed a passed ball that went into the official books as a wild pitch. The pitch isn't the whole reason the Mariners lost to the Angels, anyway. But this was ugly, it was a demonstration of just lousy fundamentals, and we're all running out of time to say what we want to say about Olivo before it stops applying. People have long been exasperated with elements of Olivo's gameplay and tonight's mistake gave a reason to bitch one more time. It feels good to bitch about players you'd rather not have on the roster, so it feels good to get to bitch about Olivo. There's not much bitching about him left.

After Olivo, take Justin Smoak. Olivo gave us something to be upset about; Smoak gave us a reason to keep on hoping for a better future. Smoak came in already having beaten the shit out of the baseball all month. We're all scrambling to try to figure out whether Justin Smoak has figured it out. Smoak popped up harmlessly in the second, but then in the fourth, he hit another home run, off a C.J. Wilson fastball down and in. In the sixth, Smoak ripped a deep fly to straightaway center that was flagged down by Mike Trout. In the ninth, Smoak drilled a sharp grounder that got swallowed up by Howie Kendrick. Smoak batted four times, killing the ball three times, and hitting a dinger once.

I can't stop thinking about when I said it wouldn't matter what Justin Smoak did in September, because he'd deserve to start 2013 in Tacoma no matter what. It feels self-important to reflect on my own words but they're just funny to think about now, now that Justin Smoak is putting together a stretch of virtually perfect offense. Many of us believed that Smoak could improve by making certain adjustments, but no one imagined he could turn it on this quickly. No one imagined that, come September, September of this season, Smoak would look like one of the very best hitters in baseball.

My explanation for Smoak's success is that he tweaked his swings to make them better. My explanation for how this is all happening now, when we least expected it, is I don't know. Justin Smoak is making me crazy because I like to consider myself a pretty level, balanced person, and these days I don't have the damnedest clue what my opinion of Justin Smoak is. I was so ready to be over him, and in fact I might have been over him, but now here we are and he's trying to make a believer out of every last skeptic. 1.090. That's Justin Smoak's September OPS.

We were hoping that 2012 would be the season that we'd see big things from Dustin Ackley, Jesus Montero, and Justin Smoak. For a while, we were seldom seeing big things from any of them, and Smoak looked like he was writing himself right out of the Mariners' long-term plans. Ackley's still a disappointment and Montero's still a disappointment, but now at least Smoak has us wondering. One possible emergence is better than none, and Smoak is showing how you can make fans of go-nowhere teams get excited about baseball in September.

Albert Pujols debuted in 2001, and including the playoffs, he's approaching 2,000 total games played. He is one of the absolute greatest hitters in the history of the game, and even this year he has an OPS+ of 144. This isn't like Felix was the first guy to do this to like Chris Iannetta or Bobby Abreu. We're talking about Felix Hernandez and Albert Pujols, Albert Pujols, who has the ninth-highest OPS+ ever. This gets to go on Felix's developing list of career achievements. It doesn't rank up there with having thrown a perfect game, but this is a more impressive and remarkable individual feat than it's going to get credit for. Maybe somebody else will strike out Pujols three times in the same game, maybe when he's older and worse, but no matter what happens, Felix will have always been the first. Because Felix Hernandez is the king.

The Mariners lost, and they didn't have to, and that's a bummer. One could point out that the game-tying single Torii Hunter hit off Josh Kinney in the bottom of the seventh was hit off the end of the bat, as Hunter went after a good breaking ball off the plate. Kinney deserved better than that result and if Hunter instead whiffs or pops out to second, who knows how this goes? But even though the Angels won, we got a lot to take away from this, spanning a range of emotions. The most insignificant thing, for us, is that the Angels beat Stephen Pryor and Miguel Olivo in the bottom of the ninth. Justin Smoak might be becoming something. Felix Hernandez did something nobody had ever done, to one of the all-time greats. I'd take this remarkable loss over an unremarkable win. An unremarkable win against the Angels would've made for effective spoiling, but that's a fleeting joy. I'm perfectly content as I am. Except for, God dammit, Miguel Olivo, block a God damned pitch.