Four times throughout baseball history, a team has struck out 20 times in a nine-inning game. Tonight was the fourth -- the second time the Mariners have done it, and the first time it's been done against more than one pitcher. So yeah, on the one hand, it's completely and utterly embarrassing that the Mariners just tied an all-time team strikeout record. On the other hand, the Mariners hit .297 for the evening with a .928 OPS. Adrian Beltre this season is hitting .315 with a .912 OPS and some people are starting to talk about him as a potential third MVP candidate. Tonight, the Mariners put together one of the more woeful offensive performances that the game has ever seen. Tonight, the Mariners put together one of their better offensive attacks of the season.

Maybe it hurt the Mariners that Michael Saunders was a late scratch, having to be replaced by Eric Thames. Saunders had to fly home for the birth of his child, and while you might think Saunders should've timed conception for childbirth when the season would be over, Michael Saunders probably figured back then that by this point his season would be over. But it wasn't all Thames' fault. Eric Thames did not strike out 20 times this evening. Thames actually struck out just two times. Miguel Olivo, if you can believe it, and you cannot believe it, struck out just one time. Dustin Ackley struck out four times. Everybody struck out at least once but Casper Wells and Munenori Kawasaki, and Munenori Kawasaki didn't bat.

Still, the Mariners were both terrible and they produced. It makes this game tricky to write about, because at different times I saw different primary angles. Zack Greinke had 13 strikeouts through five innings and then Garrett Richards struck out the side in the sixth, and at that point the strikeouts were the angle. Then in the seventh the Mariners scored three runs and Justin Smoak lined his second dinger of the contest, and at that point Smoak was the angle. Then the Mariners struck out two times with a runner in scoring position in the eighth, and they struck out two more times in the ninth, and at that point the strikeouts were the angle again. But still, after the Mariners managed to tie an all-time record, and after the Mariners failed to play spoiler against the Angels' playoff hopes, my sense is that people are going to be talking the most about Smoak, because God dammit, Justin Smoak is doing it again.

Neither of Smoak's home runs cleared the fence by very far, and in fact Smoak's first home run didn't really clear the fence at all, but they were both well-struck line drives that just happened to have low launch angles. The quality of contact was excellent and now we've seen Smoak kill the ball a number of times this month. His September OPS is up to 1.077, with four doubles, four homers, eight walks, and nine strikeouts. He's batted just 66 times over that span, but he's showing life where before there was no life. Before, Justin Smoak was dead, and now it's like Justin Smoak has come back from the dead. It is an encouraging sign of the times that we live in that it's the 21st Century and we're welcoming with open arms a reanimated corpse. It might also be considered a worrisome sign of the times that we're in position to welcome a reanimated corpse. It's going to be weird if this becomes a thing.

People were asking me on Twitter whether Justin Smoak has figured it out. As someone who's more of an analyst, of course my answer is that we need more information. For an analyst the solution to everything is to increase the sample size. But this reminds me of something I was just reading on The Book Blog. This is one of the reasons why there are scouts, and this is where scouts could really come in handy. An analyst will look at Smoak's September and say "I need to know more." Just working with numbers, we can't say whether this is for real or a fluke. A scout or a group of scouts might be better able to determine the answer. It'd be mighty subjective and scouting certainly has its issues, but no analyst is going to know what to make of Smoak no matter what he does over the season's final days. A scout might be able to say, "yeah, this is for real," or "no, he's still got work to do." I'm personally not an expert on swing mechanics, and people who are experts on swing mechanics allowed Smoak's swings to deteriorate into what they used to be.

I said some weeks ago that it wouldn't matter what Smoak did in September -- he didn't deserve to be given a job out of the gate in 2013. He struggled for far too long, and he still doesn't deserve that. But compared to where I was mentally a month ago, I"m a lot more open to the idea that Smoak could force his way onto the roster next season if he starts in Tacoma and beats the crap out of the opposition. Previously, I'd all but given up on Justin Smoak; now I'm trying to figure out what lessons I could take away from this. It's not that Smoak is inarguably back on course, but psychologically he is pulling me back in.

Smoak hit his two home runs from different sides of the plate, which is something he'd never before done as a professional. It's only the fourth time a Mariner has done it in franchise history, and none of those times were Chone Figgins or Trayvon Robinson. Also none of those times were Ken Griffey Jr., and here I've had people telling me the Kid could do anything. Griffey never once homered from the right side. Griffey never even once batted from the right side. I don't know about you but that seems kind of cowardly?

For his part, Erasmo Ramirez wasn't bad against a difficult lineup. He stuck to his usual game plan of throwing almost exclusively strikes and a whole lot of changeups, and he didn't walk a guy in six innings. He did get the crap beaten out of him by Torii Hunter in the bottom of the fifth. The box score says that Ramirez also allowed a homer to Erick Aybar in the bottom of the sixth, but I still don't quite understand how that one happened. 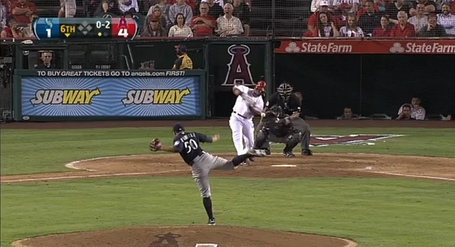