Ordinarily, upon the conclusion of a baseball game, the big story is the outcome of the baseball game. People want to talk about who won and who lost, and why the winning team won and the losing team lost, and the implications of the win and the loss for the two teams respectively. That is the very essence of your average baseball game recap. "Here's the outcome, here are some of the details, here are some missed opportunities, and there's more baseball tomorrow or the next day." People have experimented with automated game recaps, and while those recaps can be lacking in colorful language, there's a reason this sort of thing is possible to do: generally, it's formulaic. Generally, it's easy to predict what people want to know.

It doesn't matter. No Mariners fan really cares about the loss; Mariners fans come to terms with a lot of losses, and while this particular loss guaranteed that the Mariners won't finish the year with more wins than losses, that ship set sail before the Mariners so much as got started packing their luggage. Presumably no Rangers fan really cares a lot about the win; the Rangers are comfortably in front, with playoff odds pushing 100 percent. A loss and a sweep would've been unfortunate for them, but it by no means would've been devastating. The Rangers are on cruise control.

Going into the seventh, Dempster had kept the Mariners scoreless. It was quite the feat for a guy who I always forget plays for the Rangers now, and the first part of that is tongue-in-cheek, and the second part of that is honest. Leading off, Eric Thames got the Mariners on the board with the other of his two outcomes. Then Dempster generated two easy outs, bringing Ryan to the plate, as the potential third easy out. I think I've made no secret of the fact that, overall, I'm a Brendan Ryan supporter. I'm also happy to acknowledge that when Ryan is batting, I'm frequently focusing on other things. I mean, I have a laptop right in front of me, and the laptop is connected to the Internet, and I also have apartment windows that are clear and show the outside. Of all the things I could be looking at when Ryan is batting on the TV, the TV is low on the list of things I might find satisfying.

Dempster began by missing with a slider. Then he didn't miss with another slider, but Ryan didn't miss it, either. Ryan batted with no one on base, and a 3-1 score became a 3-2 score.

Brendan Ryan homered beyond Safeco's left-center power alley. Last year, as a full-time Mariner, Ryan didn't hit a single home run at home. This year, before today, Ryan had hit one home run at home, a fly ball right down the left-field line. Ryan today cleared the part of the park that's given Justin Smoak so much damn trouble. Brendan Ryan homered into the Mariners' bullpen. I hope that Ryan got the baseball back, and I hope that said baseball was not unscrawled upon by some of the relievers. That's a baseball that deserves whatever baseball players like to draw with markers. Penises, probably.

After the Mariners first traded for Ryan, I remember writing a post saying in so many words that Brendan Ryan probably wasn't going to hit. It wasn't any great breaking news for anyone familiar with Ryan's track record, but I remember there being one commenter who insisted that Ryan had better offensive potential than his numbers let on. And Ryan, you know, isn't a little guy. Though he's a middle infielder, he's listed at 6'2 and 195. He isn't scrawny. If you looked at Brendan Ryan, but didn't watch him swing, you'd think, sure, that guy can probably hit some home runs.

And he can hit some home runs. He just can't hit very many of them. But now Brendan Ryan has cleared the Safeco left-center power alley, and I'm left wondering how much power potential he actually has. Ryan's swing is all wrong for hitting the baseball deep, and seemingly optimal for hitting the baseball straight up in the air, but what about Ryan's body? How many homers could Ryan hit if he had a different swing? We'll never know, because this is the Brendan Ryan that exists and he's 30 years old, but watching a guy unexpectedly do what Ryan did can make you wonder.

Brendan Ryan has now faced Ryan Dempster 19 times in his career, owing to Ryan's time spent in the NL Central. Ryan has faced only ten other pitchers more often than he's faced Dempster, with Dan Haren leading the pack with 33 showdowns. But Dempster has now become the first pitcher in baseball that Brendan Ryan has taken deep multiple times. 13 pitchers, Ryan has homered against once. Dempster, Ryan has homered against twice. Ryan may end up with multiple homers against multiple guys before it's all said and done, but Dempster is the first such guy, and Dempster will always have been the first such guy.

I looked this up, not thinking it would lead me anywhere. I am ever so thankful that I spent the minutes on the research, because it gave me a reason to watch Brendan Ryan's first career home run against Ryan Dempster. It happened in September 2009, in St. Louis.

I think that's about all there is to say about Ryan going deep. Interestingly, all five runs scored in today's game scored on homers. All one runs scored in yesterday's game scored on homers. In consecutive games at Safeco Field, all the runs were scored on homers, which sounds kind of crazy if you leave out the part where you're just talking about six total runs. With that said, there was some evidence that the ball was kind of carrying this afternoon, and I don't feel good bringing this up since I just spent a thousand words talking about Brendan Ryan going yard. Add another asterisk! We go to the top of the fourth. Mike Napoli already launched a solo shot. Here's Geovany Soto with a man on and a 3-and-1 count against Jason Vargas: 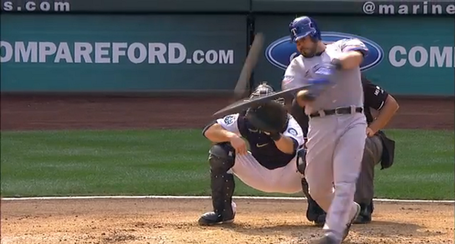 Vargas threw Soto an 88 mile-per-hour fastball just above the belt on the inner half, and Soto went after it, his eyes having figuratively lit up. He had just taken a cutter in the same location the pitch before, and it was called a ball, but here Soto saw a chance to go deep. He swung, and then he didn't think he put on a good enough swing. 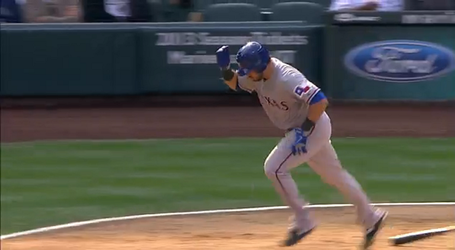 Immediately after Soto made contact, the broadcast picked up someone shouting angry words in Spanish. At first I thought it could've been Vargas, since Vargas left a pitch up that got hit for a home run, but then Vargas was born in California. Slow-motion instant replay showed that it was Soto yelling, and he threw his bat to the ground out of frustration. Soto thought that he'd missed a hittable pitch. 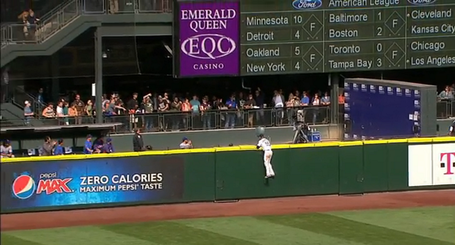 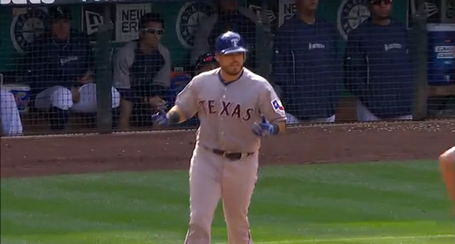 Here we have Geovany Soto rounding first base, surprised to learn that he has hit a home run on a fly ball he thought he popped up. Very often you'll see guys go into their home-run trots on fly balls they think are home runs that are not actually home runs. Those guys immediately get criticized for dogging it and for showboating. Soto still sort of dogged it, since he didn't hustle down to first, but he didn't hustle down to first because he thought he'd hit into a routine fly out. For the first 45 feet or so he didn't even look at the ball. Then he did a double-take. Geovany Soto did an actual double-take in real life as he learned that he hit a home run. This happened in Safeco Field. We knew that Jason Vargas has made a living out of getting homer-lucky in half of his games, and here just a little bit of that luck was negated.

So the Mariners lost. They had a good chance to do damage in the bottom of the eighth, after opening with consecutive singles and after loading the bases with one out. They didn't score. You can be mad at them for that, but then in the top of the ninth the Rangers wasted a leadoff triple so it kind of went both ways. The Mariners were 0-for-5 with runners in scoring position, but the Rangers were 0-for-10, so this game could've been worse. Had it been worse, would it have mattered? Brendan Ryan cleared the left-center power alley and that's enough for me. Kudos to Carter Capps for looking all right. Special-K bars to Luis Jimenez for now being 1-for-17. Jimenez has to know he might never again get to play in the majors, which puts incredible pressure on him to succeed in the immediate. Which makes me just feel really bad that he's struggling. One home run. One home run is all that I ask and we're quickly running out of time. But I mean Brendan Ryan just hit a home run to the left-center power alley. How hard could it be?