If you're a Mariners fan, and if for at least the last few years you've tried to keep yourself a little informed on the state of the Mariners' minor-league system, it might feel like Carlos Triunfel has been around forever. Triunfel signed with the Mariners in 2006, and he began playing in the US in 2007. There are lots of guys who join the system young and who play in the US that you never hear about, but Triunfel put himself on the map right away. He possessed such an impressive array of raw tools that observers took to drooling. The guy was young, and he was way down in the minors, but if he were to ever put things together, he could be a superstar. So they said.

Triunfel drew star comps, the way talented teenagers do, and while on the one hand those comps can be ridiculous -- people shouldn't be so hasty to compare teenagers to Miguel Cabrera -- they keep people excited, because once you hear that a prospect has been compared to Miguel Cabrera, you pay a lot more attention to that prospect. Everybody wants a young superstar and young superstars have to start out somewhere. The Mariners' system was pretty thin, but Triunfel looked like a jewel.

Triunfel hit his first professional home runs in 2008. He suffered a devastating leg injury in 2009 and basically missed the entire season. The next year was a different kind of disaster, and while 2011 was better, it wasn't better enough. Triunfel wound up in Tacoma, just one step away from the majors, but he didn't perform. He wasn't a wreck, but nothing stood out, aside from his variety of errors. Triunfel is in the majors now as a September call-up. He was promoted because whatever.

Many Mariners fans have been familiar with Triunfel, on account of the prospect hype. The Rangers' Martin Perez is not an altogether different sort of prospect. Perez is a pitcher and therefore not an error-prone shortstop with questionable discipline and questionable strength, but he's another guy who's been around forever, another guy who's showed up high on prospect lists whose performances have largely failed to impress.

Perez is a year younger than Triunfel, and where Triunfel debuted in 2007, Perez debuted in 2008. After that debut he appeared in Baseball America's list of the game's top 100 prospects. He shot up the list the next season after crushing single-A, but double-A posed a challenge. Perez posted a double-A ERA over 5 in 2009. He posted a double-A ERA near 6 in 2010. He did strike out a batter an inning, but his walks were too high and he was oddly too hittable.

Still, after Perez appeared to get the hang of double-A in 2011, the Rangers bumped him to triple-A, where he's had a rough go of it. Last year, his triple-A ERA was over 6. This year, he struck out 69 batters in 127 innings. Before this season, BA considered Perez the No. 31 prospect in baseball. He's a lefty with a live fastball and sometimes two other big-league-caliber pitches. 69 strikeouts, 127 innings, triple-A Round Rock. Perez is in the majors now, after having first been promoted in late June. He was promoted because whatever.

Some time ago, Triunfel was thought to be a blue-chip prospect. Some time ago -- less time ago -- Perez was thought to be a blue-chip prospect. Their respective prospect glows haven't dimmed completely, as Triunfel's just 22 and as Perez is just 21, but tonight in Safeco Perez started for the fourth time in the majors and Triunfel started for the first time in the majors, and it wasn't the sensation that we once might've thought it could've been. Perez could've blossomed into an ace, and Triunfel could've blossomed into a cleanup-hitting slugger. Perez might still develop, and Triunfel might still develop, but tonight there just wasn't a whole lot of hype or excitement. ROOT Sports tried, bless their wicked corporate hearts, but not many people tuned in because they wanted to see the starting debut of Carlos Triunfel. They might've, had his course of development gone differently.

What this actually was was a late-season Friday night baseball game between a team not going to the playoffs and a depleted team basically certainly going to the playoffs. The Mariners put out a bunch of non-Felix Mariners, and the Rangers put out a bunch of Rangers not including Josh Hamilton, Adrian Beltre, or a proven starting pitcher. One of the things about baseball is that individual players mean less than they do in other sports, even if they're star players, but the Rangers were playing without their two best position players and any of their best starting pitchers. While the Mariners improbably improved to 8-9 in the 2012 season series against Texas, this particular win might merit an asterisk. If not an asterisk, a small footnote. Is that what an asterisk indicates? Did I basically just say "if not X, then X"? I am a professional writer and I am terrible at it. This is why I don't like telling people that I am a writer. I also don't like telling people that I am a blogger. I think I'll start telling people that I am an architect.

The Mariners beat the Rangers 6-3, and they were beating the Rangers 4-3 in the bottom of the eighth when Miguel Olivo lined a two-run dinger, bringing him closer to history. It was a full-count hanging slider that Olivo drilled, a hanging slider on the upper border of the strike zone, and had Olivo laid off, it's possible he might've drawn a walk. He made his choice and he didn't make the wrong one, if at least in hindsight. Olivo's up to 12 homers and seven walks with 11 team games left, and I'm feeling mighty confident about this. He also had 12 homers and seven walks in 2008, but two of those walks were intentional. He had 16 homers and nine walks in 2006, and four of those walks were intentional. He had 16 homers and five unintentional walks. Even last year, Carlos Peguero had six homers and six unintentional walks. Olivo played for the Marlins in 2006 and based on the stats it's a real damn shame no one was watching him play that year. That's the kind of year a fan doesn't forget. That's the kind of year that makes an analyst just want to quit trying to analyze because what the fuck are we wasting our time trying to do, honestly, this shit is insane and completely nonsensical.

Prior to the Olivo homer, this was an interesting game, in that many of the interesting things that happened easily could've been other things instead. Casper Wells opened the scoring with an RBI double in the second, and here's how close that came to being a lineout instead: 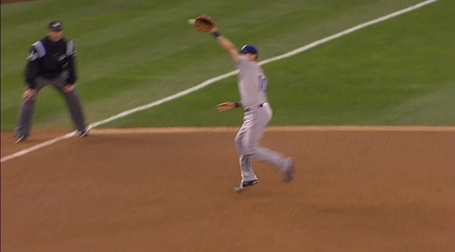 This wasn't the last time the Mariners would benefit from Michael Young not being Adrian Beltre. Anyway, the Mariners scored again in the third. Franklin Gutierrez blasted a shot to center that could've been a homer in another park, or in different conditions, but instead it hit the wall and Gutierrez settled for a triple. He scored when Perez uncorked a wild pitch on a fastball in the dirt. I don't know who besides Martin Perez bounces fastballs.

The Mariners would score two more times in the fourth. Carlos Triunfel doubled down the left-field line, but he doubled on a grounder that simply bounced over the head of Young, who had been playing shallow. Later, with two outs, Gutierrez hit a grounder to third that Young couldn't handle, allowing Triunfel to come in. The Rangers playing without Beltre didn't only make their starting lineup worse. Boy did it ever not only do that tonight.

In the seventh, Gutierrez launched another deep fly ball, this one to right-center field. Again, in another park or in friendlier conditions, that might've been a homer, but this time Craig Gentry ran it down for an out. I don't know if Franklin Gutierrez gets frustrated when this sort of thing happens or if he's just happy for every day he wakes up without multiple sclerosis.

As for the Rangers, there wasn't really anything weird about the ways that they scored. David Murphy singled home two runs with a line drive, and David Murphy homered home one run with a line drive. The pitch he lined for a single was a low, inside fastball, and the pitch he lined for a homer was a low, inside fastball. Outside of one four-batter stretch in the top of the fourth, the Rangers didn't really get much done against Hisashi Iwakuma. After consecutive mediocre starts, Iwakuma allowed three runs and zero walks in seven innings, while striking out four. This was, one more time, a Rangers lineup without Hamilton or Beltre. It was still a fine lineup, and Iwakuma did those things he does when he's going good, namely he threw strikes and generated grounders. I'd make note here of Iwakuma's updated season numbers out of the rotation but you probably already have a good enough idea of what they are.

Iwakuma yielded to another guy, who yielded to another guy, and then the game was over. The game ended with a Tom Wilhelmsen curveball that Mitch Moreland didn't really swing at, but that the umpires concluded Mitch Moreland swung at. I don't know how we don't have a more defined rule for what does and does not count as a swing. I suppose even if we did have such a rule, we couldn't trust human umpires to get the calls right, because that shit happens in a hurry. There are swings, there are non-swings, and then there's this enormous gray area in between. I'm rooting for some World Series to end with a disputed check-swing. Some World Series without the Mariners in it. Like all the other World Series that ever have been.

Of note: in the first inning, Triunfel allowed a grounder to bounce off his glove and go for an infield single. Later on, Triunfel ranged to his right, backhanded a grounder, and made a strong and perfect throw to first. Triunfel was involved in three double plays, and the broadcast couldn't say enough about his arm. One particular throw he made to Justin Smoak at first base was clocked at over 90 miles per hour. There was a camera angle that showed the tail that Triunfel gets on his throws. If Justin Smoak doesn't work out as a hitter, welp, he's fucked, time to go try to turn hunting into a business. If Carlos Triunfel doesn't work out as a hitter, he could have a career as an inconsistent fastball-heavy middle reliever. There's not not glory in that as a backup plan.

The Mariners just have to go 10-1 the rest of the way in order to finish at .500. They're now just three and a half games behind the Pirates. I'd settle for catching the Pirates. There are only 11 Mariners games left in the season. Remember opening in Japan? Me neither. Somebody else just came in and typed that sentence while I wasn't looking.