Ichiro Is Still A Wizard

Share All sharing options for: Ichiro Is Still A Wizard

The Seattle Mariners traded Ichiro Suzuki to the New York Yankees on July 23 of this year. Today's date is September 21, of this year, meaning the Mariners traded Ichiro to the Yankees less than two months ago. Since then, the Mariners have traded Brandon League, they've traded Steve Delabar, they've had a seven-game winning streak, they've had an eight-game winning streak, they've had a five-game losing streak, and Felix Hernandez was perfect in Safeco one afternoon against the Rays. It's been less than two months, but a lot has happened, so you're forgiven if you've lost track of Ichiro. You're forgiven if the trade seems like it happened last decade.

How's Ichiro been doing? I'll provide for you his 2012 batting line with the Mariners:

And now his batting line with the Yankees, up to the minute, over 178 plate appearances:

With the Yankees, that's an OPS+ of just about 120. Between 2001-2010, Ichiro posted an OPS+ of 117. Many have long believed that Ichiro would never age, and many were just waiting for the struggling version of Ichiro we saw in Seattle to bounce back. It looks like he's bounced back, and all he needed was to be traded to the Yankees. Ta-da!

It's interesting what this could mean for Ichiro's future, since he's actively demonstrating that he still has some gas left in the tank. As a Yankee he's even stolen ten bases. Based on this late-season run, people are going to look at Ichiro and see an experienced player who could still help in the outfield. And they're going to see a player who can still generate hits on balls in play that should never become hits. Ichiro's been doing that all his life, and he just did it again, Friday night, against Jarrod Parker and the A's.

In the third inning, Parker threw Ichiro a low first-pitch fastball, just out of the zone. Ichiro swung at it, because Ichiro swings at whatever Ichiro wants to swing at. The result was a grounder right back to the mound: 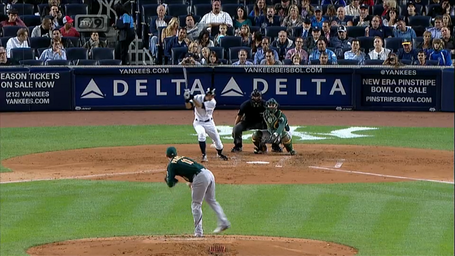 Parker was in fine position, the ball was more or less heading for his glove, and it wasn't struck that sharply. This had all the makings of a routine 1-3 groundout. Maybe Parker would jog a little of the way over to first base before underhanding the ball to Chris Carter, like pitchers do. Maybe he'd throw from the mound, since Ichiro can run. As the ball was returning to the mound, Parker had every reason to be thinking about how he'd throw the ball to first. He forgot about the part where he needed to catch the ball to throw it to first. 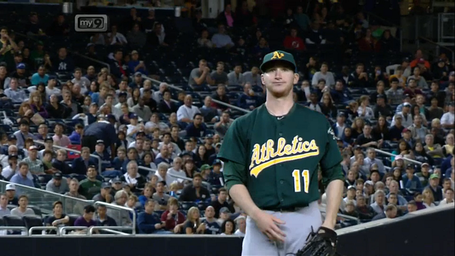 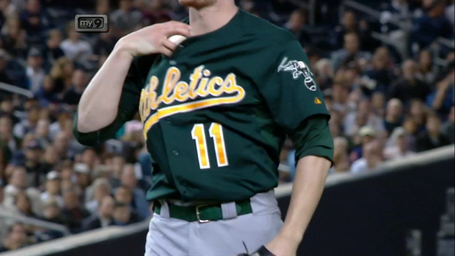 From the very beginning of his very first North American spring training, Ichiro has had his detractors, his critics who didn't think there was any way he'd be able to succeed hitting like he hits. Those critics didn't know about Ichiro's spells. In the critics' defense, they've been under one. Ichiro is a wizard. Ichiro does things a wizard would do.