The Other Thing About Brendan Ryan

Share All sharing options for: The Other Thing About Brendan Ryan

Brendan Ryan made a play last night that I haven't been able to get out of my mind. You can watch a highlight of it here, if you missed it, or if you didn't miss it but want to watch it again. It wasn't a play that you're going to see on any ESPN year-end highlight reels, because nobody dove, nobody went over a low fence, and the ball didn't take any funny bounces. It was just your run-of-the-mill spectacular defensive play that was made to look a lot easier than it would've been for an average baseball player.

Felix was facing Endy Chavez with two outs and nobody on in the top of the fifth, so the Mariners' infield was in its normal lefty-hitter positioning. Endy Chavez doesn't run like he used to, in large part thanks to a different Mariners shortstop, but he can still motor, and he was starting from the left-handed batter's box. Felix threw a pitch that Chavez grounded back up the middle, past the mound. Here's a screenshot from right after Chavez made contact: 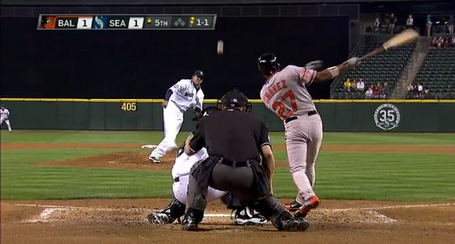 In the frame, we see an umpire, a hitter, a catcher, a pitcher, a center fielder, and some fans. We don't see a shortstop or a second baseman, and this image wasn't in any way cropped. I wouldn't say that Chavez's contact was "sharp", but it was sharp enough to get the ball to the outfield in a few seconds. 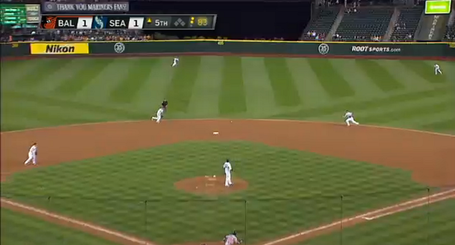 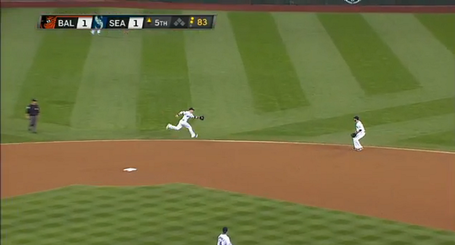 This is where Ryan caught the baseball in his glove. He is something like a full body length to the right of second base, and he's also about on the outfield grass. Had there been a runner on second, Ryan would get credit for keeping the ball in the infield, thereby preventing the runner from scoring. There was no runner on second, and Ryan still had to throw out the runner going to first. He'd only completed one of two hard parts. 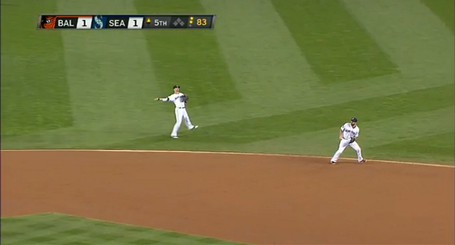 Brendan Ryan's throwing position. Remember that Endy Chavez was the guy running. Ryan didn't have a lot of time to set his feet, and in fact he didn't set his feet at all. He threw with his arm while the rest of his body was still running to go high-five the right fielder. Dustin Ackley flinched because whose throwing arm would you trust from that throwing position? 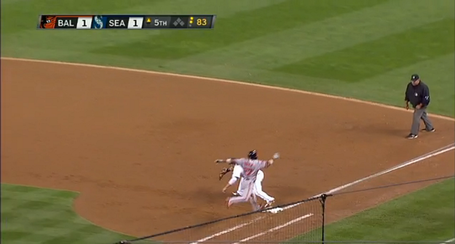 The throw was on target, on the fly, and Chavez was out. I don't know how many major-league shortstops would've turned that grounder into an out, but I can guess that the answer is very very few of them.

Of course we've all grown accustomed to Ryan creating outs out of nothing in the field, helping to offset his tendency to create outs out of nothing at the plate. Given the option, I imagine the overwhelming majority of us would vote for Ryan for the Gold Glove, because it's hard to imagine a shortstop being any better than him. What people don't really talk about, though, is that Ryan turned 30 in March. He isn't just a phenomenal defensive shortstop; he's a phenomenal defensive 30-year-old shortstop.

Now, 30 isn't old, especially to those of you who are 30 or older than 30. We don't expect players' defensive abilities to completely deteriorate by the time they appreciate Mad Men, but we do expect them to have gotten worse. You've heard that an average player's physical prime is somewhere between ages 26-30. That's when you expect to see offense peak, but position-player defense is like fastball velocity for pitchers. Defense tends to be its sharpest around a player's debut, and from there it slowly gets worse, until it starts getting worse less slowly. You can still be quick and nimble when you're 30, but you won't be as quick and nimble as you were when you were 22.

It's incredible for anyone to be as good as Ryan is, but it's even more incredible when you consider his age. As good as the numbers make him look, he looks even better when you compare him to shortstops 30 and older. There are worse things for a shortstop than to draw comparisons to Omar Vizquel. It's a shame about Ryan's bat, it really is, and things might not get any better there, but this is about appreciating Ryan's strength and what a strength it is.

It's also worth mentioning that Ryan isn't a burner. He doesn't steal a whole ton of bases, and he doesn't drill a whole ton of triples. Part of the reason is because Ryan is pretty much never on base, but Ryan doesn't have footspeed to thank for his UZR. Nor arm strength, really. It's his instincts, hands, and throwing accuracy that make him the defender he is. Attention to detail, too, if you consider that a separate category. It's not that Brendan Ryan just has a general problem paying sustained attention to things. It's that all the attention he has to give, he gives to his work in the field. That's how that works. That is my professional medical opinion.