To be completely honest with you, I might as well point out here that I'm a little disappointed. Olivo's game in no way changes my personal evaluation of Miguel Olivo, but it changes the numbers, and I love when statistics are laughable. I loved that Olivo had four walks all year, each of which was either preceded or followed by another unintentional walk. I love that last year, Anthony Vasquez had 13 strikeouts, 13 walks + hit batters, and 13 home runs allowed. Seven walks is still not very many walks, but it's a good deal better than four, meaning Olivo's numbers aren't quite so laughable. That'll take some getting used to.

It's funny that Olivo homered yesterday, driving in both of the Mariners' runs, and still all I can think about are the bases on balls. It's odd that Olivo showed discipline in the process. He walked for the first time in the second inning. He walked on four pitches, but the fourth was a fastball right by the up-and-away corner of the zone. Olivo walked again in the ninth. He laid off three sinkers just barely outside. Finally, Olivo walked in the 16th. He laid off three fastballs just barely low and away. Olivo didn't just draw three walks -- he drew three somewhat difficult walks.

Miguel Olivo must've been in the zone. Out of nowhere, Olivo started identifying pitches. I'll point out that Olivo has had extended stretches of in-the-zoneness in the past. In May 2011, Olivo posted the same walk rate as Jack Cust. He swung at just 34 percent of pitches out of the zone, which is worse than average, but not by a lot. In July 2011 Olivo swung at 55 percent of pitches out of the zone. Infrequently, Miguel Olivo gets it, and most frequently, Miguel Olivo doesn't have it. Most frequently, he doesn't have anything even close to it.

Now at seven walks, Olivo has passed Mariner Eric Thames, he's caught Franklin Gutierrez, and he's one behind Munenori Kawasaki. He has one more walk than Barry Zito. He has as many three-unintentional-walk games in 2012 as Kevin Youkilis, David Wright, and Joey Votto. We also know now that Olivo won't set a new career low, as he drew five unintentional walks in 2006 and 2008. This is what I mean when I say the numbers aren't so laughable anymore. It's crazy and improbable that Olivo did this, but as a result his overall 2012 body of work brings me less joy. I'm just a little bummed out.

You might be wondering: is Miguel Olivo turning over a new leaf? Are we witnessing the beginning of a Miguel Olivo metamorphosis? I present to you Olivo's final plate appearance Tuesday night, or, more accurately, Wednesday morning. Facing Jim Johnson in the bottom of the 18th inning: 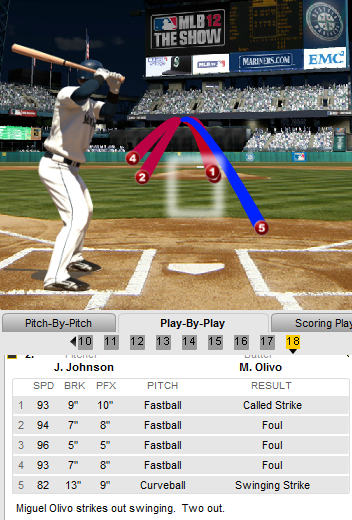 I think things'll be back to normal right quick.