In his pregame chat with the media Eric Wedge said that Noesi will go back to the bullpen and not start Sunday's game as scheduled.

Unofficially, Noesi was supposed to get two starts with the Mariners down the stretch, but his first was so atrocious that it's not even worth giving him a second because no matter what happens the scent would still linger. I didn't watch the game last night, because I didn't have cable yet, but my understanding is that Noesi was getting absolutely lit up. Hard contact everywhere -- as much hard contact as can be fit into 54 pitches and 35 strikes. Noesi's job in Tacoma was to learn how to not give up so much hard contact and, welp, better luck next time, whenever that is.

By some people, Noesi's problems have been inaccurately reduced to throwing hittable pitches in 0-and-2 counts. That's just a part of the whole deal, but it was laughable what happened in Noesi's very first plate appearance yesterday: 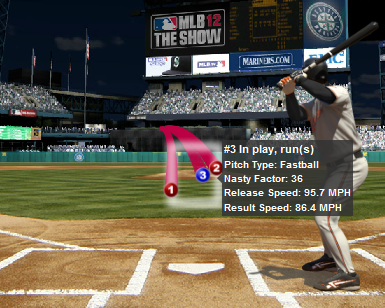 Strike, strike, home run on an 0-and-2 fastball at the thigh over the inner half of the plate. It was supposed to be a fastball outside, just off the plate, somewhere in the lefty-strike zone. Noesi had made two relief appearances since being recalled, and they were both scoreless, but last night was Noesi's first test back as a starter and it was a complete and utter failure. As far as I can tell he didn't do a single thing right. He did identify the baseball and he consistently threw it in the proper direction, but given how things played out, perhaps he shouldn't have.

It's too hasty, of course, to completely give up on Noesi as a starter. And if you figure he worked on things and made progress in Tacoma, it's too hasty to pass judgment on post-recall Noesi after one turn. But Noesi has gobs of work to do and he might well end up a reliever, if he ends up as anything. The problem is as simple and as daunting as command. Noesi has little problem throwing strikes, but he has a world of problems throwing consistent quality strikes, and that's what gets him punished. He has his pitches and he knows where the zone is, but he can't yet put those pitches in and around the zone like he'd like to. He could figure it out, or he could be like the majority of pitchers and fight inconsistent command all his life.

I'm starting to ramble now, after intending a quick-hit news item. Noesi won't start again for the Mariners in 2012, barring injury, and he'll presumably start for the Rainiers to begin 2013, if he doesn't get moved. How bad has he been this year? Let's remove his two relief appearances and focus just on his work as a starter. In baseball, 179 guys have thrown at least 50 innings as a starter this season. Among them, Noesi's ranks:

We'll close with a fun fact that isn't fun at all. According to FanGraphs, Noesi has posted a -0.8 WAR while facing 436 batters. Justin Smoak has posted a -0.9 WAR while batting 474 times. By WAR/600 plate appearances, both Noesi and Smoak come out to -1.1. Noesi and Smoak have been equivalently valuable. The difference is that Smoak has spread out his plate appearances instead of batting 23 times every five or six days. The other difference is almost everything else.