Michael Saunders Finally Did It

Share All sharing options for: Michael Saunders Finally Did It

Saunders has obviously changed as a hitter, and while he's just 25 and while people might say it isn't surprising for a 25-year-old talent to suddenly find himself, those who watched Saunders before know how hopeless he looked. He's turned it around and made himself a quality regular, and there are a few explanations of how.

The broadcast likes to talk about how Saunders has become more aggressive, and it's true that he has. He's increased his swing rate at strikes, and after swinging at 21 percent of first pitches through his first three years, Saunders has swung at 32 percent of first pitches in 2012. A common complaint last year was that Saunders was too passive and too often finding himself behind in the count. He's taken measures to change that about himself.

But perhaps the thing that's allowed Saunders to be more aggressive and confident is his adjusted swing, famously developed by the brother of Josh Bard whose first name you'd think I would have bothered to learn by now. Nope, still and always just the brother of Josh Bard. Saunders' swing had glaring, gaping holes before, mostly over the outer half. Saunders and Bard worked to change that, and there were encouraging signs of progress in spring training.

All right, fast-forward everything. It should be obvious from the numbers that Saunders has largely closed the old holes, and he's drilled the occasional line drive to the opposite field. Then last night, against the Orioles, Saunders did something he had never done before, at least as a major leaguer in a meaningful game. By this point the Orioles were leading Hector Noesi 7-0 and you might not have been watching, but here's something you might've missed. 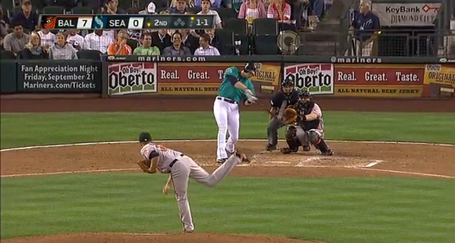 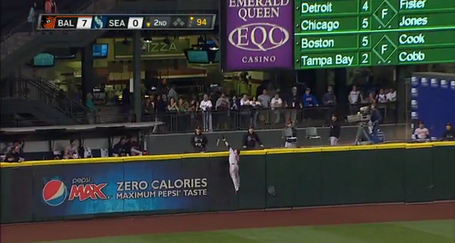 Here's the video highlight. After throwing consecutive curveballs to start the at-bat, Tillman threw Saunders a 94 mile-per-hour fastball down the center, and Saunders drove it just beyond the fence the other way. It's a pitch that Saunders might've been able to pull, but after watching two slow curves Saunders was probably right to sit back. The home run narrowed the deficit to six, and the Mariners would lose by six.

In that regard, the home run was insignificant. For Saunders, this was his first major-league home run to the opposite field. He'd pulled many a home run to right and he's launched some home runs to straightaway center, but now he's gone to left, and on top of that he's gone to left in Safeco Field. By distance and velocity, it wasn't the most impressive home run Saunders has ever hit, but opposite-field home runs usually aren't impressive for their statistical characteristics. They're impressive for having been hit out the other way.

It's a sign of how strong Saunders is that he was able to inside-out this fastball into the visiting bullpen. And now he finally has a "1" under "HR" across from "Opposite". That's a terrible way to write that sentence. Saunders now has a .128 isolated slugging percentage to the opposite field in 2012. Between 2009-2011, it was .050.

I wouldn't say that Saunders is a complete hitter, and just because he's a lot better at going the other way now doesn't mean he's awesome at it. But he's proven that he can hit to left, which means pitchers can't expose him by hovering over the outer half, which means sometimes pitchers will have to come in, which means Saunders has opportunities to pull pullable pitches. A hitter doesn't have to be perfect to be successful. He just has to avoid having obvious holes, and Saunders doesn't have those obvious holes anymore. At least not the major one.

Monday night, Michael Saunders launched an insignificant solo home run just beyond the outstretched arm of Nate McLouth. Nate McLouth, at the time, was playing left field. We already knew this was a new Michael Saunders; now we have a certificate to frame and hang on the wall.