Dustin Ackley Did A Good Thing

Share All sharing options for: Dustin Ackley Did A Good Thing

I don't like being away and unavailable when Felix Hernandez is pitching. I don't mind being away and unavailable when Felix Hernandez gets throttled. There are few things more discouraging for Mariners fans than watching Felix struggle, so I'm not too broken up about missing yesterday. I should be all moved and settled in by Felix's next start and hopefully that one's a lot better than the last one. He could consider it a housewarming gift to me.

Felix struggling wasn't the only thing that happened yesterday, though. Carlos Peguero, for example, doubled home two runs with a fly ball that should've been caught. Rajai Davis read the ball wrong off the bat and came in when he should've stayed put or backtracked. On the one hand, even when Peguero did something good, he did something bad. On the other hand, that's how strong Carlos Peguero is, because watching the highlight, I read it wrong off the bat, too. It looked like a flare and it carried nearly to the track.

And much later, when the game was out of hand, Dustin Ackley homered off Henderson Alvarez. When I saw that Ackley homered, I assumed it was on a line drive to right, but instead it was on a moonshot to center. When I looked up the distance, I assumed it went 410 or 420 or 430 feet, but instead it went 452. A 452-foot home run is one hell of a home run. 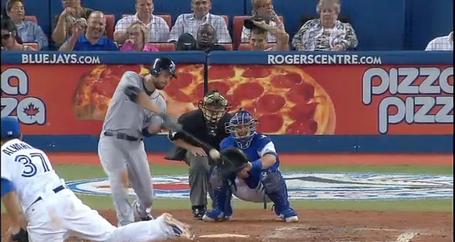 That is a 2-and-1 fastball in the very center of the plate, at Ackley's thigh. Alvarez is one of the most hittable starters in the league, and that's Alvarez throwing one of the most hittable pitches. Ackley is a high-contact hitter and that pitch was going to get hit from the instant it left Alvarez's fingers. But it's how hard it got hit that's remarkable. The ball left Ackley's bat at 111.4 miles per hour and flew 452 feet.

You might remember Michael Saunders going deep earlier this year off Francisco Cordero in Toronto. Saunders blasted a pitch out to center, and it had a distance of 452 feet and a batted-ball speed of 111.6 miles per hour. Though the balls wound up in slightly different places, Saunders and Ackley basically hit the same home run. They're both a foot shorter than the Mariners' longest home run so far this year, which was hit by Carlos Peguero, because of course.

This was the longest home run of Ackley's limited big-league career. Back on opening day in Japan, he hit a 438-foot home run to the right side of center. It's difficult to reconcile home runs like this with Ackley's .337 slugging percentage and .105 Isolated Power. There are people who think of Ackley as more of a slap hitter, people who think he doesn't have the swing for the major leagues, but yesterday Ackley hit a power hitter's home run off a 95 mile-per-hour sinking fastball. You can't fake that, and you can't say that Alvarez supplied all the force. Ackley has a swing that can generate this result. It's more a matter of consistency.

And I don't know if we'll ever see that consistency. I don't know if Ackley will ever become more than he is right now. His contact rate has shot up lately, suggesting some sort of adjustment, but his numbers haven't improved at all so it's unclear what should be made of this. Ackley is not a very good hitter right now, but occasionally we're reminded of how much he's theoretically capable. Sometimes we see him drill line drives to the gaps, sometimes we see him draw difficult walks, and sometimes we see him beat the absolute crap out of a pitch. A guy who can hit a home run like Ackley's yesterday has a significant potential home-run ceiling.

We're not going to solve Dustin Ackley today. Let's just roll around in his home-run highlight, ignore what happened to Felix, and celebrate one of my new favorite .gifs of the 2012 regular season. Dustin Ackley is always watching, even if he's watching Dustin Ackley. 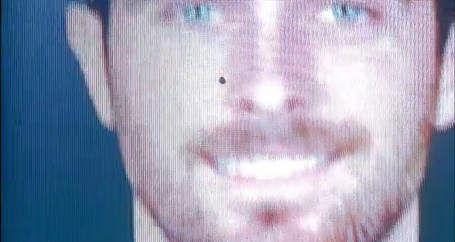