Share All sharing options for: Baseball Game Gets Played; Mariners Win It

Right now, the Cubs are playing the Astros in Houston. By the time you read this, they should be finished, and it looks like the Cubs will have won. Wednesday's is the last game of a three-game series between the worst team in baseball and the second-worst team in baseball. There could be no more dreary matchup in a more dreary location, and I thought this was a pretty fitting screenshot, from the other day: 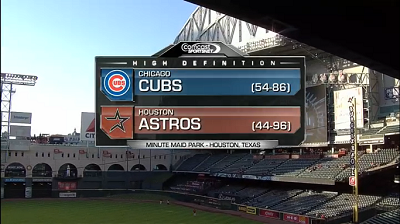 Cubs vs. Astros, with terrible records and no one in the stands. The teams have been out of contention since March, and they're only just beginning what ought to be extended, trying rebuilding processes. There are interesting young players on each roster, but there aren't enough of them, and these just generally aren't baseball teams worth watching. Especially when they go head-to-head. Sitting down to watch the Cubs and the Astros this September would be like sitting down to watch seeds grow into plants. On any given day you're not going to see a damn thing, and you might never see a damn thing if no one remembers to water the seeds. The environment for the Cubs/Astros games has been about the environment you'd expect.

The Mariners have been playing the Blue Jays in Toronto, and the Mariners and Blue Jays are way better than the Cubs and the Astros. Each team has talent, and each team is further along in its own rebuilding process, so each team is theoretically closer to contention. Mariners fans have reason to believe that the Mariners' time is coming soon, and Blue Jays fans have reason to believe the same thing about their own team, especially given the Orioles' pixie-dust contrail.

But it's September and the Mariners are playing the Blue Jays, and the Mariners are in last place, and the Blue Jays are nearly in last place. The Blue Jays have been destroyed by injuries and are down in the depths with the miserable Red Sox. These games have some meaning to some of the players, but they have little meaning to most of the fans. They certainly don't mean anything as far as the playoffs are concerned. If Wednesday's game were canceled for whatever reason, people with tickets might've been irritated, but there weren't many people with tickets, and people at home would've been happy to find something else to do, if they weren't already planning on doing something else.

Today's was a baseball game that the Mariners won by a run. It was started by Kevin Millwood and there was very little for either side that was exciting. There wasn't any atmosphere, and why would there have been? The whole reason I've written this intro is because there were times that I'd listen closely to the broadcast in between sentences, and infrequently was there even the dull soundtrack of chatter. Sometimes there would be a guy yelling, very audibly, and sometimes there would be more of a murmur, but a lot of the time there was just this electrical hum that might well have been coming from my TV or the light fixture on my ceiling. This baseball game was attended by people who attended because whatever. It was followed at home by people who followed because whatever. It was a baseball game, and this is what a lot of us do at this time of year, even if the game itself is just something inconsequential that happens.

The Mariners led this game 1-0, then 3-0, then 3-2. After the bottom of the fourth, there was no more scoring, and there was hardly even the acknowledged threat of scoring. It turns out that Kevin Millwood and the Mariners bullpen combined to throw a two-hitter. Those two hits came in the span of three at-bats in the bottom of the fourth. After Adam Lind singled on a grounder, the Blue Jays went 0-for-15 with two walks. It's impressive for one team to hold another team to two hits; it's remarkable that I had to look at the box score to know that that happened in the game that I was watching.

The Mariners were better, but only a little -- they kept putting pressure on early, but they struggled to find run-scoring hits, and they slowed down after Ricky Romero was removed, which makes sense given that Ricky Romero is terrible now. I remember when I was always afraid that Romero would throw a no-hitter, which I had to worry about in my old job. Romero just lost for the 13th time in 14 starts. In fairness, in six of those games the Blue Jays scored either zero runs or one run, and we all know that wins and losses can be misleading. But it's hard to lose 13 times in a 14-start span and not be terrible. It's not simply that Romero hasn't won since June 22. It's that he's lost 13 times since June 27, with an ERA near 8 and more walks than strikeouts.

Romero is a complete mess for reasons that I'm not sure people really understand, maybe sort of like a pitching version of Justin Smoak. The team thinks it understands what's wrong with Smoak, but a guy who was supposed to be good is instead a complete disaster and now no one can know whether he'll ever again be even all right. We're lucky that what happened to Romero didn't happen to one of the Mariners' pitchers, but Romero is nevertheless a chilling reminder of what's possible. It's like in House when Thirteen saw a patient with more advanced Huntington's in the waiting room. Maybe that won't ever happen, but it might. Just look over there.

Miguel Olivo homered home the Mariners' first run, and from a fan's standpoint that's about as uninteresting a way for the Mariners to score as it gets. I don't think anybody actively dislikes Olivo the person but Olivo the player has no future here and we'd rather see the younger guys hit the dingers. I guess the actual most uninteresting way for the Mariners to score would be Chone Figgins singling home Olivo from second base after Olivo reached on an error or something. As fun as dingers are, Olivo dingers aren't the dingers we most want to see, and we're greedy.

In the fourth, Franklin Gutierrez singled home a pair of runs. He drove an outside 1-and-2 curveball the other way, and right now he's sitting on a .767 OPS through more than a hundred plate appearances. This is why we believe. Neither Gutierrez nor Michael Saunders is outstanding at the plate, but they're both outstanding in the field and at least roughly average at the plate, which makes them capable starters. It's just, you know, literally everything else about Franklin Gutierrez. There's no way his house isn't baby-proofed. Not at this point, and not because of any babies.

Kyle Seager was also good, and Millwood lasted five innings. It turns out he threw five innings and 66 pitches with discomfort in his shoulder, which explains the early removal and the slight dip in average velocity. Millwood's shoulder was bothering him and he finished having allowed two hits and a walk in five innings. His last fastball was 90 miles per hour. I don't know when he'll be available to pitch again and I imagine that few of you will be so preoccupied with the question that you struggle to sleep. Erasmo Ramirez and Hector Noesi are here and they're supposed to start, so Millwood will get all the time he needs. Unless he needs like months and months, since his contract expires in a matter of weeks.

Millwood's at the point now where he's reasonably effective but increasingly physically limited. We call this "aging", and after this stage, it gets a lot worse. Millwood will have to decide whether he can do another year of this, and that'll be a difficult and consuming decision, for Kevin Millwood.

The Mariners' bullpen did well after Millwood. I don't remember when Josh Kinney became Captain Trustworthy considering in spring training he was just some veteran reliever on the pile, but it looks like he's going to go on to have a real career. Tom Wilhelmsen slammed the door with a strong inning and while the inning included a walk of Edwin Encarnacion, Encarnacion is terrifying and Yunel Escobar -- the guy in the lineup behind him -- is not. Earlier, Encarnacion had hit a home run, and the Rogers Centre sounded a goal horn, happily reminding the gathered audience that at least there might not be any Maple Leafs this year. With Jose Bautista missing, Encarnacion is the guy to pitch around, and Wilhelmsen probably didn't mind the walk.