This has nothing to do with the Seattle Mariners, if you were hoping for something about the Mariners. It does involve Cliff Lee, who used to be a Mariner, and a rather amazing Mariner. Many are still quite fond of Cliff Lee and feel like we didn't get to spend enough time together. It also involves baseball, and the Mariners play baseball. I'll be quick.

I don't usually watch a lot of the Marlins and the Phillies, but for a short period of time this afternoon I made an exception because why the hell not? I watched about four plate appearances. Now I've learned the name of umpire Clint Fagan, and I'd never heard that name before in my life. I've watched enough baseball that I at least know about the existence of most of the game's umpires. Fagan is completely new to me, and he's made a bad first impression.

In the top of the second inning, Justin Ruggiano batted against Cliff Lee. Here's how that went: 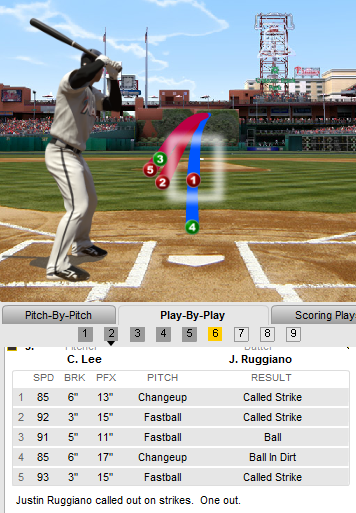 Pay special attention to pitches 2, 3, and 5. All of them were fastballs, and all of them were between the knees and the belt. #2 was a little inside, but Fagan called it a strike. All right, wide zone, whatever. Here's pitch #3:

Practically just as inside as the pitch before it, but this time it's a ball. Fast-forward through another ball, and the count is 2-and-2. Here's pitch #5:

Way inside, completely off the plate, called strike three. Ruggiano had every right to complain because Fagan hadn't at all given him a consistent strike zone. Ruggiano continued to complain as he returned to the dugout and Fagan wound up ejecting him. Ruggiano never got in Fagan's face. He just complained about a bad call and then his afternoon was over. You might not know anything about Justin Ruggiano, but he came in with a .936 OPS. He's kind of important. 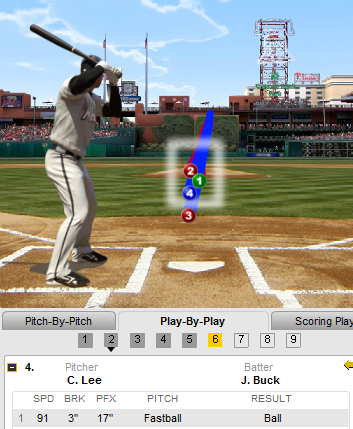 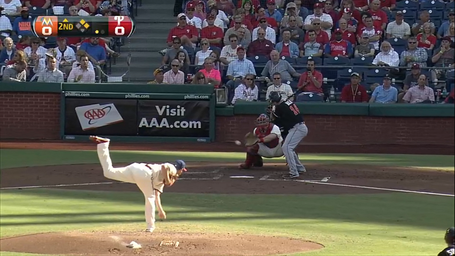 Obviously, the pitch was not received very well by Erik Kratz. We know that makes a difference, even though realistically it shouldn't. It was a fastball pretty much down the middle of the strike zone. Ball one.

It isn't fresh to talk about home-plate umpires messing up the strike zone. It's actually rather stale, which speaks volumes about how often bad calls are made. But you usually don't see them kind of in a row like this, along with an ejection of a valuable player. Now you, too, are familiar with the name Clint Fagan. And one only gets one chance to make a first impression.