Hello! You might be wondering why I've been doing less writing than usual lately. It's because I am in the process of moving, not out of Portland, but across it. Moving is terrible and it takes a lot of time and there's still more moving left to be done. But by this time next week everything should be normal, and more importantly, you're not here to read about me moving in Portland. You're here to read about the Seattle Mariners, so let's talk a little about the Seattle Mariners beating the Toronto Blue Jays 4-3 on Tuesday.

And then there's the fact that Morrow has dominated the Mariners in the past. Over three starts and 19 innings against the M's, Morrow had gone 3-0 with 28 strikeouts. I think I recall him saying he wanted to pitch extra well against the Mariners because they're the team that traded him away. I could be wrong about that but I have no way of knowing whether I'm wrong as long as I don't look it up to make sure. I don't know why Morrow wanted to punish the on-field Mariners for a front office decision, but I guess kudos to him for finding extra motivation, or anti-kudos to him for not having the same motivation every start.

There were elements of interest at play, here, and it was the Mariners who came out on top, because Ramirez was outstanding, and because Morrow was horrible. When one starting pitcher is outstanding and the other starting pitcher is horrible, you don't expect a 4-3 final score, but yet it's all still somehow true. Ramirez was as described, Morrow was as described, and the Mariners won by a run.

Morrow faced 24 batters and was on the mound for 14 outs. Two of them were on the bases, and Morrow surrendered a season-high 11 hits. His previous high was eight hits, done twice. More remarkably, Morrow was charged with nine line drives, so it's not like the Mariners were hitting a bunch of grounders that just found holes and made their way to the outfield. Morrow got himself knocked around, and it's weird, because you expect that when Morrow struggles, it'll be because he's struggling with walks. There was one walk. Morrow spent the evening as a handsomer Blake Beavan.

And Ramirez did well against a lineup that's missing Jose Bautista, but a lineup that still isn't bad. Probably the most Erasmo Ramirez fact of the night is that, through the first three innings, Ramirez threw four balls. That's out of 34 pitches. Earlier this season, Bartolo Colon threw 38 consecutive strikes against the Angels, and that's one of the more inconceivable records of my lifetime. If you sit and actually allow yourself to think about it, you might think about Bartolo Colon throwing 38 consecutive strikes and have your brain melt and drip out of your nostrils. Ramirez didn't do what Colon did, but Ramirez at one point had a strike:ball ratio of 30:4. That's the Erasmo Ramirez of Erasmo Ramirez's dreams, and it's hard not to succeed when you just don't throw balls at all.

Some more balls would come later on, but Ramirez finished with seven innings and nearly three-quarters strikes. He generated a full 14 swings and misses, and while I can't confirm anything with PITCHf/x, I can say that he had his changeup doing what changeups are supposed to do. Ramirez's situation is unclear as the Mariners right now have too many starters. Ramirez earned himself at least another start, and starts like this one make it easy to pencil him in to next year's rotation. Ramirez comes with limited upside, figuratively and literally, but while I just cautioned us all about believing in "safe" talents, Ramirez seems like a pretty safe talent. He's established beyond a reasonable doubt that he can pepper the strike zone. His stuff is good enough to miss bats on more occasions than Blake Beavan's stuff. Erasmo Ramirez is Blake Beavan except a little better in pretty much every single way. He's littler, but he gives the far better post-game radio interview.

This was the first major-league win of Ramirez's career. This was not the first outstanding major-league start of Ramirez's career, as on June 25, he allowed a run in eight innings against the A's, striking out ten. But the Mariners didn't win that game, and in fact they lost that game 1-0, and so Ramirez was left in the position of knowing that his first win probably wouldn't come in his best start. As stupid as wins are, and as much as we should pretty much never talk about them, we still talk about them because they still matter to the players and we care about what the players care about. The existence of wins allows for players to have first-career wins. The existence of first-career wins allows for feel-good moments. This wasn't Ramirez's first awesome start in the bigs, but it was Ramirez's first start that left him beaming, and that's wonderful for him. It doesn't say anything about Ramirez that he got a win here, and not on June 25. Emotionally though, it's a part of the picture.

The Mariners' offensive star was Kyle Seager, who finished 3-for-5 with a home run. His two runs driven in pushed his season total to 81, making him the first Mariner to reach 80 RBI since 2009. He was already also the first Mariner to reach 75 RBI since 2009, and 70 RBI, and 65 RBI. If you were out of the country for years and didn't know anything about what the Seattle Mariners offense was like in 2010 and 2011, now you know all that you should care to know. If you come to know any more you might slip into a depressive state and kill yourself or somebody else. Recent versions of the Mariners had the kind of offense that turned people deadly.

Seager, now, is up to 14 home runs on the year on the road, with an .842 OPS. At home, meanwhile, he's at four and .611. Ever since people started to recognize that Safeco Field is a pitcher-friendly ballpark, they've recognized that it's kinder to left-handed hitters than it is to right-handed hitters. Seager is a left-handed hitter, and he seems to have the right kind of swing for a lefty to have in Seattle. Yet the results are what the results are, and they're either meaningful or they're not. Seager's a case where 2012 Safeco is just making it impossibly difficult to evaluate some of the players on the roster. Overall, Seager has been a perfectly fine hitter, surpassing expectations. Outside of Safeco, Seager has been an excellent hitter, greatly surpassing expectations. I don't know what the truth is but at least there exists the possibility that Seager is actually quite terrific. Alternatively maybe Seager has allowed Safeco to get in his head. I don't know, I'm not a psychiatrist. Even if I were a psychiatrist, I probably wouldn't be Kyle Seager's psychiatrist. I don't even know if Kyle Seager sees a psychiatrist. If he does, I don't know if they talk about home/road splits.

Other hitters who did well included Dustin Ackley, Franklin Gutierrez, Michael Saunders, and Mike Carp, all of whom finished with two hits. At one point Gutierrez flat-out dropped a fly ball, which is wildly uncharacteristic. It's discouraging, because Gutierrez dropped a fly ball, but it's encouraging, because it means Gutierrez doesn't just have some kind of baseball magnet within his person. If he did, the ball wouldn't have come loose. That's not magnetism that makes Gutierrez a hell of a defender -- that's talent. Another position player who had a remarkable game was John Jaso, who was twice thrown out on the bases. There are few things more frustrating for fans than base-running errors, and Jaso might be exploring how much he can get away with since he's built up so many brownie points. John Jaso is enough of a fan favorite that people don't even mind that he got himself thrown out on the bases two times in the same game. For the sake of comparison, I still actively dislike Chone Figgins even when I go an entire game without once seeing him on TV.

Finally, this was the second-to-last thing that happened: 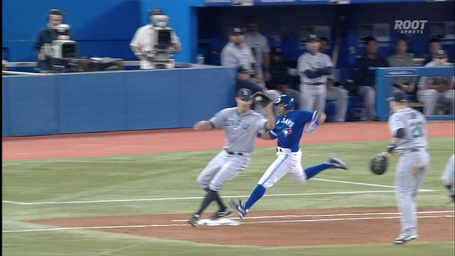 With two outs in the bottom of the ninth, Rajai Davis made the third out. Except it was ruled that he was safe, leaving Anthony Gose to make the third out. Davis was conclusively out, but reaching that conclusion required slow-motion instant replays and at full speed it was basically dead even. There was no way a human umpire could possibly know that Davis was out for sure. Now, whenever there are bang-bang plays like this, and the umpire gets the call right, broadcasters are quick to say that the umpire deserves a lot of credit. It's guesswork. With bang-bang plays like this, it's just guesswork, and people shouldn't get credit for guessing. This is our system in the year 2012!

Calling Davis safe instead of out was a big deal, because it was a one-run game, and Davis is an excellent base-stealer, and soon thereafter Davis stole second base. He was a single away from equaling the score. On the other hand, that would've meant an equal score between the Mariners and the Blue Jays in the middle of September. So just how big a deal was it, really?