Share All sharing options for: Carlos Triunfel Makes His Debut

It is a common complaint around this time of year that there's nothing to write about. I imagine it's different if you're writing about a team in the playoff race, since everything is interesting and super important in a playoff race, but this is a Seattle Mariners blog. One should never take the complaint literally. There is always plenty available to write about. There are lots of players in the majors and minors, and there are a lot of games, and there are a lot of statistics, and there are a lot of feelings. But what's meant is that there's nothing that feels like it's worth writing about, and there's nothing that it seems like people want to read about. Let's face it: it's September 10, today, football just started, school just started, and the Mariners are sitting in last. How many people are really looking to read more about the Mariners? What ought to be written about them?

But I'm supposed to write about the Mariners anyway. It's the whole point of this blog and I can't just take off weeks at a time because "fuck it, Mariners." So here I'm going to write about Carlos Triunfel's brief major-league debut even though it was basically unremarkable and even though it happened days ago. If you didn't watch the Mariners this past weekend, it'll feel like it's fresh! So, it'll feel like it's fresh!

There's a range of possible outcomes for one's first at-bat, and it's the same as the range of possible outcomes for any at-bat. You can hit a home run, you can strike out, or you can do something in between. A home run, obviously, is the greatest possible outcome. A first-pitch home run in your first at-bat would be amazing, the most amazing. I think a three-pitch strikeout would be the worst possible outcome. I haven't decided, though. You could hit into a double play, or pop out, or tap back to the pitcher. But at least then you would have put the ball in play. A three-pitch strikeout is an out without even putting the ball in play. If it's not the worst, it's close to the worst.

Carlos Triunfel debuted on September 7. It was the bottom of the ninth, the Mariners were behind 6-1, and Triunfel pinch-hit for Brendan Ryan, against Sean Doolittle. Sean Doolittle is a guy you hardly know anything about who's left-handed and fantastic. Once upon a time, we hoped that Triunfel's debut would be a bigger deal. Once upon a time he was perhaps the most purely talented prospect in the system, and after 2007 he ranked 62nd on Baseball America's list of the top-100 prospects, when he wasn't yet 18 years old. Triunfel's career hasn't gone like we hoped it would, as is usually the case with exciting teenage prospects. Some of that is on Triunfel, some of that is on bad luck, and maybe some of that is on mis-evaluation of what Triunfel was, and what he could become.

Still, on Friday, Triunfel was debuting, and he's 22. Better prospects haven't made it even this far before. It wasn't a big spot and there couldn't have been many fans still paying attention, but this was Triunfel's first-ever opportunity to do something in the majors. If Triunfel was thinking anything, he was probably thinking something like "make something happen," except in Spanish. You only get one first time, and this was Triunfel's first time.

Triunfel saw Doolittle's first fastball, so he went after the second one. He took a nice, healthy cut, fouling the ball back to the screen. At least Triunfel knew he wouldn't go back to the dugout without having made any contact at all. The fastball was over the very middle of the plate, at the belt.

Three pitches, three fastballs, three strikes, the last one swinging. On the one hand, Doolittle threw this last fastball at 96 miles per hour. It's understandable why Triunfel might've been a little behind it. But a good player should be able to hit a fast fastball, and Doolittle threw this 0-and-2 fastball over the center of the plate, at the thigh. Hector Noesi saw Doolittle throw this 0-and-2 fastball and thought "oh I don't know if that was a good idea bro." It was a fastball, down the middle.

In Carlos Triunfel's major-league debut, he struck out swinging against Sean Doolittle. Based on the numbers, there's no shame in striking out against Sean Doolittle. But Triunfel struck out on three pitches, all of them fastballs in the zone over the middle of the plate. Triunfel had the platoon advantage. Carlos Triunfel has certainly imagined his major-league debut before, and he probably never imagined it like this. Hopefully he's already forgotten everything about it.

Side note: I introduce you to Carlos Triunfel's superstition. 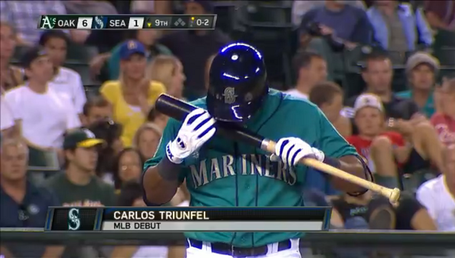 This is Carlos Triunfel in between pitches. He was only in between pitches two times, but both times, he did this, bringing the bat to his face and, I don't know, licking it. Maybe kissing it. Maybe whispering to it. Maybe scratching an itch on his cheek. I hope Carlos Triunfel isn't one of those people who say "itch" instead of "scratch," those people drive me absolutely bonkers. I hope other things about Carlos Triunfel way more. I hope he somehow turns out good. And I hope that, when he's good, he explains what's going on here. It's one thing to have little routines but I don't even know how something like this can develop.

Triunfel: one time I thought my bat smelled nice so I smelled it
Triunfel: then the next pitch I got a hit
Triunfel: so now before every single pitch I smell my bat with my face
Triunfel: I see thousands of pitches each season
Triunfel: because I am a baseball player this sort of behavior is accepted and not considered a symptom