Angels Sentenced To Death For Regicide

Share All sharing options for: Angels Sentenced To Death For Regicide

I'm going to bring this back to Felix Hernandez's perfect game, for two reasons. One, remember how Felix Hernandez threw a perfect game, just a few weeks ago? I was thinking yesterday about how Ichiro was traded and Felix threw a perfect game within a month. Two landmark occasions in Mariners franchise history, one practically occurring right after the other. That was a hell of a stretch, where by stretch I mean line segment, between two incredible points. Two, on a day like this one should try to focus on baseball positives, if one is thinking about baseball at all. Many are not and they can't be blamed. But today Felix and the Mariners lost a tough game to the Angels and at least reflecting on Felix's recent perfect game makes things just a tiny bit better.

I'm bringing this all up because of the top of the eighth. Going into that inning, the Mariners were ahead 2-1, and Felix had been looking strong, even though he'd occasionally ended up in trouble. He finished this game with impressive statistics and I'll talk more about that later. Felix began the inning but he didn't end it, and he wound up getting charged with four runs, three of them earned. Felix had a chance to let Tom Wilhelmsen blow this game in the ninth, but instead this game was blown on Felix's watch. That's not something that's happened very often, ever, and it's not something I'd say that Felix deserved today. That half-inning was a reminder of how even good pitching can result in runs allowed, because things are up to more than just the pitcher.

Mike Trout led off the top of the eighth, because Mike Trout leads off every half-inning for the Angels, and Trout singled. But more specifically, Trout fell behind 1-and-2, and then Felix threw him a sharp slider on the outer edge. Trout just punched it on the ground between first and second base. Trout did exactly what you're supposed to do with that pitch, which is to say, he didn't do a lot, but he did just enough. He protected the plate and he wound up on base for his efforts, even though Felix executed just about how he wanted to.

After that came Torii Hunter, and Hunter also singled to put runners on the corners. But more specifically, Hunter fell behind 0-and-2. He fouled off consecutive good low changeups, and then Felix threw him a low, away slider that Hunter returned back up the middle. The 0-and-2 slider should've been a little more down and a little more away, but it was a fine pitch, and it followed other fine pitches. Hunter just did an outstanding job of getting his bat on the baseball, and he put a grounder in the right place.

The next batter was Albert Pujols, who batted with none out and the tying run on third. Felix barely missed with the first two pitches, then came back with an inside fastball that tied Pujols up. At 2-and-1, Felix came back with another inside fastball just off the plate. Pujols offered and he put the ball on the ground, but he made sharp contact and the ball eluded Kyle Seager for a devastating error. Had Seager come up with the ball cleanly, he might've been able to cut down the runner at home, or at least try to start a double play. Instead, it was as good as a double, on a fastball that wasn't a strike.

At that point it was 2-2 with none out and two runners in scoring position. Felix threw Kendrys Morales a first-pitch fastball down and away, just off the plate, and Morales bounced it to short for a routine groundout that didn't advance the runners. Felix got exactly the result that he wanted.

And then came the at-bat that broke the game open. Felix got his first-pitch strike against Mark Trumbo, who has recently been just godawful. Trumbo subsequently singled home both runners. There's not a whole lot I need to add to this Gameday image: 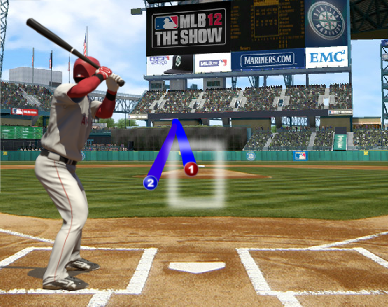 Felix threw the inside fastball he wanted, and he got the swing he wanted, and he broke or at least fractured Trumbo's bat. The ball still got through the hole and the Angels didn't look back. That's when Felix got removed and replaced by Stephen Pryor, who was legitimately bad and not just box-score-results bad. Pryor threw some bad pitches and paid the price. Felix paid the price without really throwing the bad pitches.

I'm not suggesting that Felix threw perfect pitches, that he couldn't have thrown better pitches than he did in the top of the eighth. The sequencing presumably wasn't optimal, and the execution also presumably wasn't optimal. But Felix did throw good pitches and in a lot of ways he also got pretty good results. But there are intermediate results -- like ball-in-play type -- and there are final results -- like single or homer. Felix's final results in the half-inning turned a potential win into a probable loss, with a little help from Kyle Seager.

What Felix's game log will say is that he struggled this afternoon, as he lost for the first time since June 12, allowing five runs in 7.1 innings in Safeco Field. In truth he was a hell of a lot better than he was the last time he allowed five runs, on August 10 in Anaheim. I told you I was going to mention Felix's statistics. Against Felix, there were 23 Angels balls in play, 17 of which were grounders. There were 119 Felix pitches, 86 of which were strikes. There were 65 Angels swings, 16 of which whiffed. When I write these paragraphs, I feel like I need to vary my language since they always feel the same. X many grounders, X many strikes, X many whiffs. It's dry is what it is. But it's also meaningful and a very objective way of evaluating a performance. It's not complete, but it gives a good idea. This afternoon, Felix lost. This afternoon, Felix threw strikes, missed bats, and got grounders, not allowing a single home run. This afternoon, Felix deserved better.

Every start that comes before a perfect game and every start that comes after a perfect game serve to underscore the improbability of a perfect game. When a pitcher does throw a perfect game, he's the guy who gets just about all of the credit, but there's so much luck, such an unbelievable, staggering amount of luck that comes into play. Not just in obvious terms, like getting borderline strikes or having the defense make one or two spectacular stops. There's also no baseball ever finding a gap. There's no hitter swinging at a good pitch and blooping the ball over the infield or reaching on a swinging bunt. There's no hitting of good pitches, which happens a lot. It happened a lot today to Felix Hernandez in less than one half of one inning.

Just because every perfect game requires a heaping helping of luck doesn't mean that you shouldn't wildly celebrate a perfect game. Any and every exceptional achievement probably benefited from luck along the way. That's how things become exceptional, unless you're talking about Mike Trout, who's exceptional because he was delivered from his mother by Jesus himself. I'm never going to forget the way I felt when Felix struck out Sean Rodriguez, and neither are you, if you were watching, which you might not have been. But that afternoon the stars were fuckin aligned. The stars are seldom aligned and there's just so much that a pitcher can do. A pitcher can't stop hitters from hitting good pitches, and a pitcher can't provide his own run support, in the American League.

Because you'll notice that Felix was given two runs of support today, against Ervin Santana. Felix is no stranger to low run support and indeed no recent Seattle Mariners pitcher is a stranger to low run support, but something you have to be careful about is just accepting this bullshit when it starts to feel routine. Four times this season, Felix has won a 1-0 complete-game shutout. That is simultaneously awesome and embarrassing. I wish that there would be more runs. It doesn't seem unreasonable to want more runs to be scored.

You'd think it would've been a good sign that Trayvon Robinson hit a ball out to right-center. Shortly after Justin Smoak weakly grounded out on a 2-and-2 low fastball over the plate, Robinson blasted a 3-and-2 low fastball over the plate that just barely escaped the yard. On the one hand, there was the just-barely part. On the other hand, there was the right-center-in-Safeco-Field part. That's not an easy home run, and that's not a home run I knew that Trayvon Robinson was capable of hitting. After more than 100 trips to the plate Robinson is looking legitimately useful, which is a surprise. It's a mild surprise, because Robinson looks like he might actually be a big-league fourth outfielder and you can only get so excited about a surprising big-league fourth outfielder, but I remember a few years ago I wrote about the pleasantly surprising Roy Corcoran and this is better than that, so take it as progress. You can't pick the things by which you get pleasantly surprised.

But there was Robinson's homer, and a Franklin Gutierrez groundball RBI double, and that was it. The other extra-base hit was a Justin Smoak double, but that was also a groundball. Smoak has four extra-base hits since returning from Tacoma. Three of them have been groundball doubles. They haven't even been line-drive air doubles. I don't know what Smoak could possibly do between now and the end of the season to make people want to see him again in 2013. What would be required, I don't think that Smoak is capable. This has to be awkward and uncomfortable for everybody. There's no hiding Justin Smoak's lack of productivity. There's no hiding that he's got about the same average and OBP as Chone Figgins. There's no hiding that Justin Smoak is a first baseman who turns 26 in December. There are busts, and then there is Justin Smoak through more than 1,300 plate appearances in the bigs.

With luck, this was a game that could've been won, as the Mariners were in position to win as late as the top of the eighth. It would've been won pretty much all thanks to Felix, and Felix's brilliance would've again shrouded the lack of contributions from the rest of the team. Don't get me wrong, I love those wins. I love all wins, and especially wins with Felix in them. But I'd like a little more. I guess I can't get too greedy considering how the Mariners have played overall since the break. See how quickly sustained success can be forgotten? We are almost impossible to please!

More baseball tomorrow afternoon as the Mariners try not to get swept. It would be weird if the Mariners had the Angels do the sweeping since the Angels are the guests. But then wouldn't it be great if guests did the sweeping and hosts didn't have to bother? I guess this is where the parallels between baseball and chores break down. Also Carlos Peguero batted once today and struck out swinging.