Hello friends, today is Thursday, August 9, and the Seattle Mariners don't play a baseball game. Yet I'm still supposed to write about the Seattle Mariners, who are 51-62 and who have lost five of six games. I can't write about various trade possibilities. I can't write about an interesting new hitter on the team. I can't really write about much of anything optimistic, although I guess I could write about Felix. Maybe later I'll write about Felix. But these are the days in the season where we just have to settle for pointing out the slightest things of interest. Anything to get us through this day to the next one. Today I will show you something of interest about Carter Capps, who is an interesting and new reliever on the team. Maybe you've heard of him!

Capps has pitched twice with the Mariners and he's been more or less as advertised. Maybe a little more wild, but there's probably an adrenaline factor for a guy barely a year removed from Mount Olive College, a college on top of a mountain of olives. Their baseball field was of very poor quality, making Capps a difficult player to scout. Mount Olive pitchers liked to refer to the mound as Mound Olive so that was pretty clever. Mound Olive at Mount Olive, that's what they used to say. Capps has thrown his fastball very hard and he has thrown a breaking ball. He has also thrown exclusively with his right hand, confirming earlier reports.

Here is a picture of Capps right around the point of release, from last night in Baltimore: 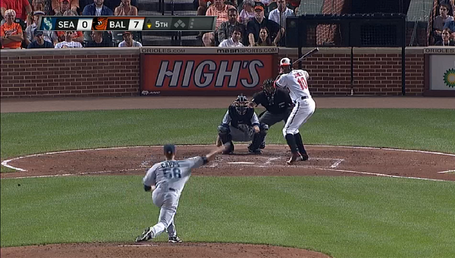 If you just see that picture in isolation, you might not think too much of it. Right-handed pitcher throwing to right-handed batter. Fairly low arm angle. Sign for HIGH'S. Orange. Let's now use some charts available at Texas Leaguers to compare Capps to, say, Felix Hernandez. We're looking here at horizontal release point.

I checked the month of August for right-handed pitchers with similar horizontal release points to Capps', and I came away with Joe Smith and Louis Coleman. That's about it. Joe Smith is a side-armer. Louis Coleman also gets down there, although his fastball averages about 90 miles per hour, not 98.

What does it mean for Capps? You've probably heard this before, but for right-handed batters, it's like Capps is releasing the ball behind their backs. To visualize, I've mapped all right-handed batter HBPs for the 2012 season. That should indicate just about where righties stand, relative to the plate. On the same graph, I've shown Capps' release points. Here is that graph: 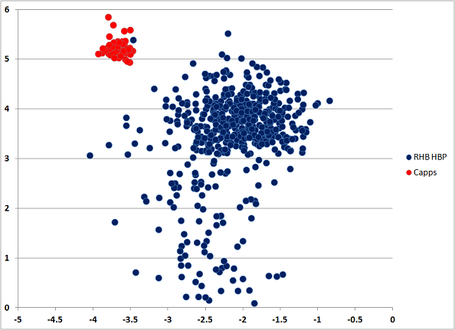 Indeed, Capps is releasing the ball behind the hitters. From a distance of 60 feet, it's not a dramatic difference, but it makes things more difficult because the right-handed hitter doesn't get a straight angle or a good look. The ball's coming in from a funny position, and just for shits and giggles it also seems like Capps has a wee bit of deception to him.

In theory, this should make Capps an outstanding weapon against righties. In theory, it should also leave him somewhat vulnerable to lefties. Capps' minor-league splits don't quite bear that out, but the talent level is a lot different in the minors, and the sample sizes are small. A good lefty is going to get a look at the ball out of Capps' hand, but righties are going to be doing a lot of swinging and missing.