The Mariners have played three games in Baltimore in 2012, and they've lost them all. They played three games in Baltimore in 2011, and they lost them all. The Mariners, therefore, haven't won a game in Baltimore since 2010. It's odd, because you'd think the Mariners would be right at home in a city with such a vibrant harbor. But for that damned fear of birds. Tough to overcome a fear of birds. You know what's pretty much everywhere? Birds. And litter. It'd also be tough to overcome a fear of litter. If you have a fear of birds and litter you should probably just kill yourself. This is a recap of a baseball game.

Maybe blogging about baseball on a regular basis is awesome when you're writing about a quality team. But how would I know? This is only my ninth year of doing this. That's hardly anything.

What's that you say? You didn't watch? For shame! Allow me to provide for you the setting. It was the top of the second inning, and the Mariners were behind 2-0. Whoever Steve Johnson is walked Eric Thames to load the bases with one out. Up came Munenori Kawasaki, and he fouled off a first-pitch fastball down the pipe. Johnson came back with another fastball, up and in. 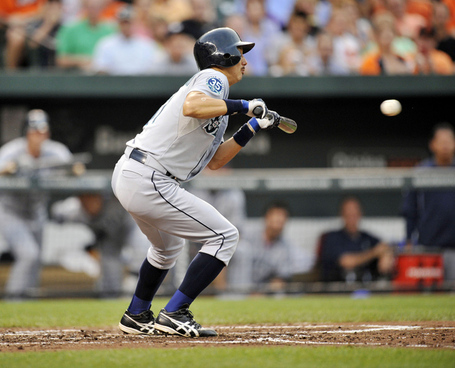 The bunt was clearly Kawasaki's decision, and not the bench's, because it was a bad, nonsensical decision, and the bad, nonsensical decisions made by coaches tend to be a lot more predictable. Eric Wedge was not a fan of this particular decision, and he let Kawasaki hear about it. I don't know what good a lecture could do since Kawasaki's brain just keeps on repeating an ice-cream truck version of The Entertainer, but for perhaps the first time, we have Munenori Kawasaki making people upset because of his on-field performance.

Kawasaki has made some mistakes on the basepaths before, but that's different. That's usually a result of aggressiveness. Kawasaki's hitting numbers aren't very good at all, even if you pretend like he's played every single game in Petco Park, but it's different when a guy hits into regular outs. Kawasaki gave up the at-bat. At least, that's how it looked. He bunted back to the mound with one out and the bases loaded in a close game. Kawasaki gave it away.

Kawasaki has to this point coasted by because he's been a backup, the Mariners haven't been very good, and he's been unfathomably entertaining. He's been made out to be an unofficial team mascot. His performance didn't really matter. Now he's done something that's gotten under people's skin, and this is a new situation for him.

Appropriately, it's a situation with which Ichiro is intimately familiar. Ichiro did this thing where he'd bunt with runners in scoring position, and while he didn't do it every time, he did it often enough to drive people crazy. People couldn't figure it out, especially while Ichiro was so good at hitting singles. That was one of those things that made Ichiro unpopular with the segment of the fan base among which Ichiro was unpopular. Presumably there was some sort of strategy involved, but people hated it. People always groaned, every time. And maybe that's where Kawasaki learned the maneuver.

The funny thing is this was Munenori Kawasaki, not Ichiro. To have the bases loaded with one out and Munenori Kawasaki at the plate is to have a situation that isn't nearly as promising as you'd like it to be. Maybe Kawasaki would've struck out. Maybe he would've lifted a shallow fly. Maybe he would've tapped back to the mound and generated the exact same outcome. Maybe if Kawasaki's bunt is better, he catches the infield by surprise and everyone's safe. Maybe, because he's Munenori Kawasaki, the bunt was actually the right call, and he just didn't put down a bunt that was good enough.

But people aren't going to want to hear that, and I don't even think I believe it. In that situation, you're swinging away, pretty much no matter who you are, and because of Kawasaki's bunt and then the next thing, the Mariners wasted an opportunity to get into a game that promptly got away from them. This was one of those blowouts that might not have been a blowout had there been a different sequence of events early on. That is, this was one of all blowouts.

So now I'm more than a thousand words in and I've basically just talked about Munenori Kawasaki bunting. As long as he doesn't do that again, it should be forgotten in time, and ultimately it won't make much of a difference anyway. Dustin Ackley finished 0-for-5 with three strikeouts and the only difference between him and Kawasaki today was that Ackley made his annoying outs by swinging. Michael Saunders was 0-for-4. Trayvon Robinson was 0-for-4. Eric Thames was 0-for-3 and made a pair of mistakes in right field that led to Orioles runs. Kawasaki made the most conspicuous, puzzling mistake, but tonight it was the Seattle Mariners as a team who were shitty.

Steve Johnson was an emergency starter for the Orioles after scheduled starter Tommy Hunter was forced to warm up last night. You had never heard of Steve Johnson. He had appeared once in the majors before, in relief, and he owned a career 4.18 ERA in triple-A. He was drafted in the 13th round, in 2005. His fastball averaged 89 miles per hour.

He finished with nine strikeouts in six innings. He struck out the side in the top of the first, around an 0-and-2 single. He threw 97 pitches, and he generated 16 whiffs. 16 whiffs out of 47 swings. 11 whiffs out of 31 swings at his fastball. His fastball that averaged 89 miles per hour. There's something to be said for the Mariners never having seen Johnson pitch before, and next time he probably wouldn't have quite so much success, but how important is experience, really? How important is it that you've seen a guy hanging out in triple-A with an 89-mile-per-hour fastball and a standard assortment of offspeed stuff? What's the excuse here? Granted, Trayvon Robinson and Munenori Kawasaki were in the lineup, but they weren't the only two problems.

I guess the way people usually try to console themselves is by saying "he just pitched a heck of a game." Maybe Steve Johnson just pitched a heck of a game. It didn't really matter anyway since Kevin Millwood pitched a shit of a game. Tasked with trying to last as long as possible after last night went five hours, Millwood made it four innings. The first two runs went in and out of Eric Thames' glove, but the next five runs did not.

Recall that this was the Kevin Millwood image in the game thread post:

Millwood's ERA is now up to oh my god who cares, who actually cares, it isn't Hector Noesi, this team isn't spilling over with major-league rotation candidates. It doesn't matter what Millwood does from here on out. We've had our fun. He played a part in a combined no-hitter. He tried to no-hit the Rockies in Coors. Millwood's given us as fans more than we could've expected. If he's toast, well, he was a 37-year-old who signed a minor-league contract. If he's not toast, great, go Kevin Millwood. Help the Mariners achieve whatever they're trying to achieve.

If there was one thing that got my attention after the Orioles ran away with the game, it was Carter Capps' two-inning appearance. I missed his debut over the weekend, and tonight he threw 39 pitches, with his fastball averaging 98 and touching 100. Seven of 21 swings against his fastball whiffed, which sounds about right. Watching Capps pitch, it's as if his fastball is in the air for no time at all before it arrives at or in the catcher. It has some movement, but it's not a pitch he was locating with precision. Neither was his breaking ball, which he barely threw. If you want to evaluate Carter Capps based on this one appearance, he throws very hard and is a little wild, with an inconsistent secondary pitch. You should never evaluate a player based on one appearance. An evaluation based on one appearance can still end up correct.