This past offseason, news spread that a Japanese shortstop named Munenori Kawasaki wanted to play in the Major Leagues, and only wanted to play for the Mariners. With the thrill of the hunt removed from the equation, we were left to simply evaluate what had fallen into our lap, and what we figured about Kawasaki was that he wouldn't be a very good baseball player, relatively speaking. On a minor-league contract, maybe he would make the team, and maybe he would not. It was not as if some Japanese superstar had made a commitment; it was more as if the Japanese Manny Burriss had made a commitment.

Somewhere around the start of this season, or maybe before that, someone here wrote up a FanPost declaring that Kawasaki could hit .300. It sounded ludicrous, and few people went along with it, but then we didn't quite know what we had - Kawasaki was a slap-hitting mystery. Could he translate his decent batting-average skill to the majors, or would he leave it behind overseas?

It's pretty evident what we have in Kawasaki now. I apologize for the above but I didn't really know how to set this up. His defense is fine. It's neither spectacular nor problematic. He has all the energy and watchability of a lightning storm. He doesn't have a bad eye, and he doesn't do a poor job of putting the bat on the ball. But Kawasaki really just shouldn't swing. Most of the time it's as if he's swinging a bat made of soap. Not even really bar soap. Munenori Kawasaki is a good, strong hitter relative to us, but he's a bad, weak hitter relative to his current peers.

Setting an arbitrary minimum of 80 plate appearances, Kawasaki has the 19th-lowest wOBA in baseball. Below him there are some players who have achieved high levels of performance in the past. Nick Hundley. Hideki Matsui. Marlon Byrd. Xavier Nady. But Kawasaki doesn't look like he's swimming in offensive potential. Kawasaki's isolated slugging percentage is the third-worst. He has one extra-base hit - a line-drive double that was basically a line-drive single hit to a place where there wasn't an outfielder directly behind. Kawasaki's walks and strikeouts aren't bad, but his quality of contact is among the very worst, because he is six.

This is going on a lot longer than I expected it to. I'm glad I don't have an editor because I just want to write words and be done with them. You might have thought that last night's game was spectacularly dull. It picked up only at the very end, when there were two outs in the ninth. The Mariners lost and it was hard to find anything to say about it. But early in the game, Munenori Kawasaki hit his deepest batted ball of the season.

Spoiler alert: it was not deep. I am, of course, limited by Gameday-assigned batted ball locations, which are imperfect. Kawasaki might have hit his deepest batted ball of the season on July 25. But based on Gameday, yesterday's fly to left was just a few feet longer. It went about 300 feet before dying. Deepest batted ball.

Two outs, third inning, Kawasaki vs. Chris Tillman. Tillman threw Kawasaki a first-pitch fastball more or less over the center of the plate, and Kawasaki put an adorable little charge into it. 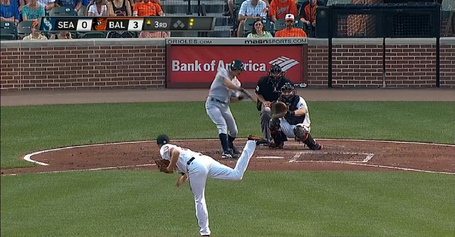 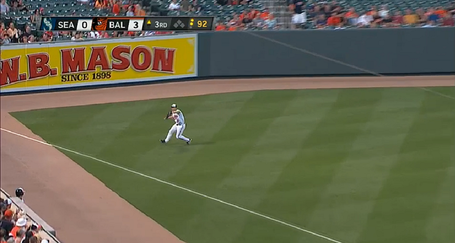 An entire separate post could be written about the weirdness of Munenori Kawasaki flying out to Lew Ford in 2012, but that's not what this is. Kawasaki went the other way with the fastball and flew out near the left-field line. The ball was well shy of the warning track, even though the image above suggests it was close. Here's Kawasaki's batted-ball location map: 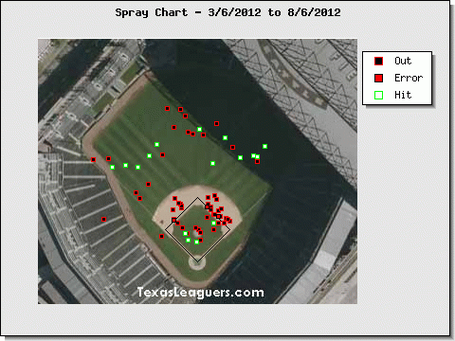 We're looking at the red and black box on the line in left. That red and black box to the left side of center was a harmless fly out to Curtis Granderson on July 25. This is the spray chart of a position player in the Major Leagues.

So it was a bittersweet moment for Kawasaki yesterday. He drilled his deepest batted ball, but it was also not a very deep batted ball. Still, Chris Tillman felt bad about himself for allowing it. 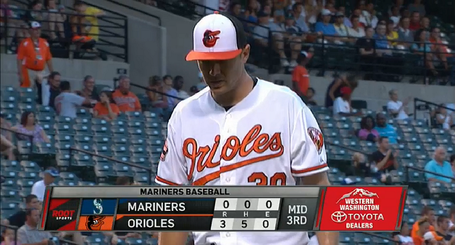 Three perfect innings and Tillman left the field wearing an expression of disgust. Chris Tillman is responsible for allowing Munenori Kawasaki's deepest batted ball. He'll think twice before throwing Kawasaki another first-pitch fastball down the middle, although he'll probably still throw it, because why not

Between 2007-2011, Kawasaki hit 14 home runs with the Fukuoka Softbank Hawks. I imagine that not all of them were inside-the-parkers. I wonder if Kawasaki is capable of a major-league home run. In an average park, I mean, since he could probably tuck a baseball around Pesky's Pole. Could Kawasaki ever go deep? What would it take? The one time I've watched the Mariners take batting practice this season it was hard to tell the difference between Kawasaki and Ichiro from the upper deck, but the guy I assume was Ichiro was littering the right-field bleachers and the guy I assume was Kawasaki was not. I think I saw him hit a ball to the right-field track. I don't know why I'm saying any of this.

Yesterday night, Munenori Kawasaki hit probably his deepest batted ball of the season. It was a harmless fly out well shy of the wall down the left-field line. Consider how beloved Kawasaki is by so many, and consider how incredible that is.