I figure it's helpful to include an asterisk in "fun fact" if the fun fact isn't actually fun. This runs counter to the track record of taking you by surprise. I may or may not keep it up. In this crazy world of ours who really ever knows what's going to happen?

Many several thank yous to Graham for his outstanding coverage over the weekend. He hit all the right notes, he did Felix's brilliant start justice, and he wound up posting a Munenori Kawasaki .gif, so everything was perfect. Not bad for a guy who hasn't been writing about baseball in years. Those of you who enjoy reading Graham can find his team blog at We Ain't Got No History, which covers some other team in some other sport, I don't know. There are way less Kawasaki .gifs where he writes regularly but there is a lot more Graham, regularly.

For personal reasons my upcoming posting frequency might be a little sporadic. We'll see how this goes and please be patient because honestly it's just the Seattle Mariners in August. Situations have changed. For now though, I figured I would let you in on something you probably could've guessed, but that you probably haven't bothered to look up for confirmation. Maybe you didn't know where to look it up in the first place. I'm here to feed you, baby birds.

This season, 254 different pitchers have started at least one game. According to PITCHf/x, their average pace is 21.3 seconds -- that is, on average 21.3 seconds pass between pitches. Hisashi Iwakuma, as a starting pitcher, has posted a pace of 26.4 seconds. That is more than five seconds slower than the league-average pace.

Some images from yesterday that I don't know why I grabbed them: 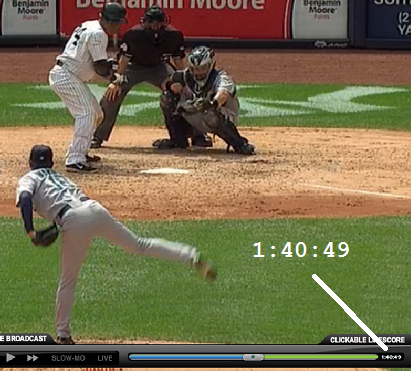 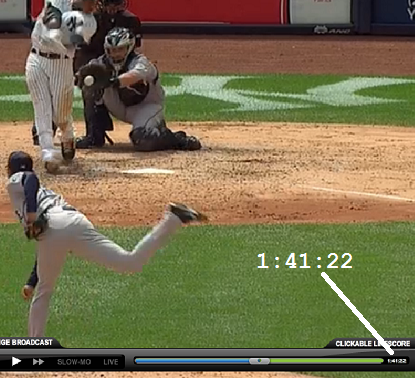 Consecutive pitches, 33 seconds apart. In between, there was a lot of stretching and standing and looking. I understand it was a very warm day yesterday in New York. You'd think that would make a guy want to get off the mound sooner. Felix has posted some of his quickest paces in New York over the weekend and in Kansas City during that one recent hellstorm. Iwakuma's pace yesterday was 28 seconds, and his slowest is 30.6 seconds, in Tampa Bay, which plays in an air-conditioned dome.

So what of Iwakuma's pace? It doesn't mean anything with regard to his value. But it does mean something with regard to his watchability, which is an important factor for fans. Even the Mariners' own broadcast has on several occasions lamented Iwakuma's "deliberate" tempo, where by deliberate I mean torturous. It is unpleasant to watch a pitcher who is working slowly. It's only a matter of seconds or second each time, which seems insignificant, but those seconds add up. Everybody's obviously noticed that Iwakuma slows the game down. That's because he slows the game down.

The Mariners shouldn't and won't decide on whether or not to bring Iwakuma back because of his tempo. He pitches how he pitches and what's important is how he pitches. But just on tempo alone Iwakuma probably doesn't have the potential to become a fan favorite. When he's at his absolute best, he can still be a pleasure. When he isn't, which is most of the time, you end up watching Hisashi Iwakuma not be at his best for a while. Too much of a while.