So much for that positive run differential. A weakened Seattle Mariners lineup -- Eric Wedge fielded Munenori Kawasaki without him batting ninth -- put up the trappings of a fight before being mauled 6-2 by the New York Yankees. Yes, the Yankees were also 'weakened', but their number nine hitter, backup catcher Chris Stewart, emerged from the game with a .275 wOBA. The Mariners are sitting at .288 on the season.

This wasn't a game that held my interest throughout. I sure hope it wasn't one that held your interest throughout, even if you were playing. Although the M's scampered out to a 1-0 lead in the first inning, they gave it up immediately thanks to a combination of dodgy umpiring, poor pitching from Hisashi Iwakuma and poor defending from Kyle Seager, who got the start at second base. Two of those were the Mariners fault, and although Iwakuma was getting squeezed, I have minimal sympathy for anyone whose pitch tempo is so... glacial.

The second inning saw the Yankees grab the lead on thanks to a defensive error from Dustin Ackley, and it was pretty obvious where the game was going to go from there. The lineup wasn't really clicking and Iwakuma wasn't particularly effective, and it was very easy to tune out of the game. If you're anything like me, you find the half-innings with the Mariners at the plate inherently more watchable, because only good things can happen, while watching the pitchers just leaves you worried about the score. With the hitters doing nothing, perusing Baseball-Reference became far more interesting than watching the game in the middle innings.

Iwakuma didn't help his cause at all. He was wild, slow deliberate and ineffective, doing a very good impression of Miguel Batista without quite managing the aura of vague creepiness. When the game began, it looked like a thunderstorm was about ninety minutes away from hitting Yankee Stadium, although the promised deluge never quite materialised, and it looked for all the world as though Iwakuma was pitching in hopes of a rainout. That probably would have been more fun.

Mike Saunders and Jesus Montero temporarily perked the game up with two outs in the fifth, with the former hammering a double off the right centre field wall and the latter lining a single the other way to plate a run and make it 3-2. That score didn't last for very long, thanks to this pitch to Raul Ibanez: 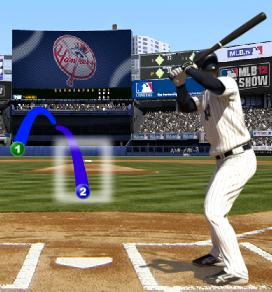 Montero was calling for a sinker on the outside corner. Anyway, said pitch ended up here:

Let's blame the ballpark for that one.

Armed with a two-run lead, the Yankees looked nigh-on unstoppable, and ended the match as a contest in the sixth when Ibanez lined a bases-loaded single over Munenori Kawaski's head to make it 6-2. Unsurprisingly, the Mariners never did anything that looked remotely comebacky, and their ninth inning consisted of plate appearances by Trayvon Robinson, Kawasaki and Chone Figgins.